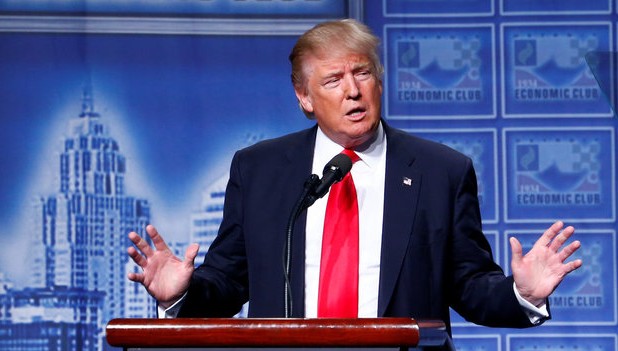 “All you got is tiny hands!” yelled one demonstrator.

The speech was billed by Trump’s campaign as a formal economic policy address, and it was not open to the public. Still, there were more than 1,000 attendees. The protesters, however, were all women and part of a group organized by the Michigan People’s Campaign.

“You want to close Michigan plants and outsource our jobs! ” yelled Jacquie Maxwell, a Grosse Pointe auto worker. “How are we supposed to raise our families without good jobs? Is that what you call winning?”

Another protester targeted Trump’s comments on sexual harassment. “Why are you blaming the victims of sexual harassment?” shouted Sarah Messer, a food service worker from Detroit. “Why shouldn’t women be safe at our work? It’s not our fault!” Trump recently said if his daughter were sexually harassed at work, hehoped she would quit her job and find a new career.

The protests began less than a minute into Trump’s speech, and continued every few minutes throughout his address, which Trump read from a teleprompter.

Trump’s carefully scripted format may help to explain why he did not lash out at any of the protesters Monday, as he has done in the past. Instead, the nominee said “thank you” to his supporters, who shouted down and booed the protesters.

One woman opted for a more lighthearted call than her fellow protesters. “Tiny hands! All you got is tiny hands!” she yelled to Trump.