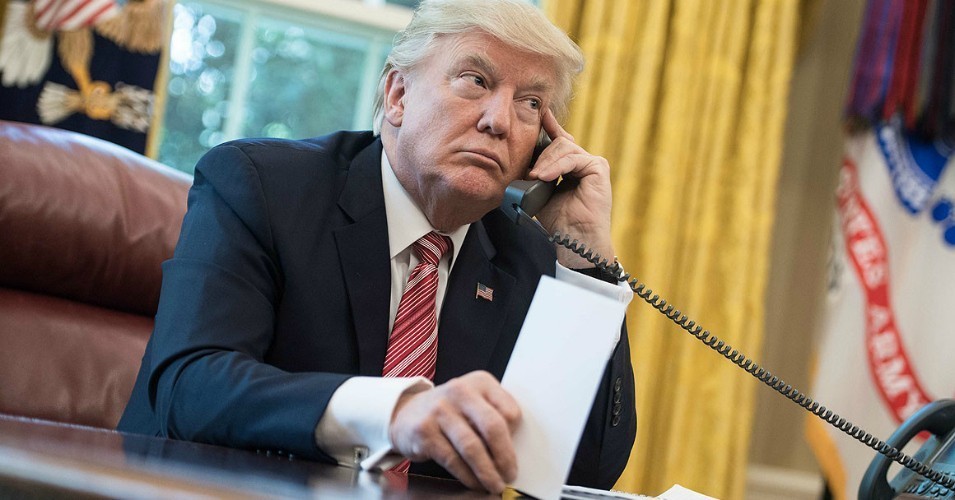 Above Photo: When Donald Trump campaigned for the U.S. presidency in 2016, he would frequently attack the JCPOA as Obama’s folly. (Photo: Nicholas Kamm/AFP/Getty Images)

The U.S. behavior regarding such international agreements, Macron said, was “insane.”

Europe did not want Trump and the United States to walk out of the Obama-era Joint Comprehensive Plan of Action (JCPOA).

JCPOA was the deal negotiated with great effort by Iran and the P5+1 (China, France, Germany, Russia, the UK, and the U.S.) and signed in 2015. At the time, Europe had substantially lost access to three of its main sources of energy—Russia, Libya, and Iran. Desperation for Iranian oil drove the European pressure on the administration of U.S. President Barack Obama to come on board the JCPOA. The U.S. was forced, kicking and screaming, into the agreement.

Iran signed the deal even though Iran’s government disagreed with its premise. The deal implied that Iran had a nuclear weapons program, which it did not have, and that the agreement would constrain it from building a nuclear weapons arsenal, which it has pledged never to have. Threats of war by the United States and its regional partners (namely, Saudi Arabia and Israel) and terrible sanctions had raised the threat level in West Asia. It was to prevent war and to undo the sanctions that Iran came to the table.

As the ink on the deal dried, Europe began to make purchases of Iranian oil. Before the European Union joined the U.S. in its sanctions regime in 2012, the EU countries bought a third of Iran’s oil output. After the deal, Iran’s oil ministry hastened to increase shipments to Europe—although lack of storage facilities and problems with payments hindered the swift increase in oil sales. During 2017, Iran shipped 720,000 barrels per day to Europe. European oil firms (France’s Total, Greece’s Hellenic Petroleum, the Netherlands’ Royal Dutch Shell, Italy’s Eni and Saras, as well as Spain’s Repsol) rushed to re-enter the Iranian oil and natural gas market.

When Donald Trump campaigned for the U.S. presidency in 2016, he would frequently attack the JCPOA as Obama’s folly. It was the “dumbest” deal, he said in Virginia in September 2016, pointing his finger at Obama and at Hillary Clinton for having signed it. The deal, he said, represents the “highest level of incompetence.”

Trump thought that it was the Obama administration that had initiated the deal, and that U.S. withdrawal from it would once more isolate Iran. But this was a misreading of the 2015 JCPOA, which was pushed not only by Europe but also by Russia and China. U.S. withdrawal from the deal would not be welcomed in Europe or in Asia. This is what Trump did not understand.

Even the closest U.S. ally in Europe—the United Kingdom—had grave reservations about Trump’s policy. UK Ambassador to the U.S. Sir Kim Darroch wrote to the UK Foreign Minister Boris Johnson in 2018 about Trump’s policy regarding Iran. Trump wanted to leave the deal, Darroch wrote in a secret memorandum that has now been leaked, to “spite Obama.” The killing of the Iran deal, Darroch wrote in a secret memorandum, was an act of “diplomatic vandalism.”

France and Germany, key signatories of the deal, openly said that the JCPOA was fundamental for regional stability. What they meant was that their oil companies and their oil-dependent civilization required Iranian oil. It was, for them, a practical matter. French President Emmanuel Macron spent three days in Washington, D.C., in April 2018 trying to hammer out the architecture for a new deal—but this failed. The U.S. behavior regarding such international agreements, Macron said, was “insane.”

France, Germany, and the UK—the so-called E3—met on July 14 to discuss the fate of the nuclear deal. This date is significant. The JCPOA was signed on July 14, 2015. Now, four years later, these three countries had a discussion and released a joint statement. In the statement, the E3 said that the JCPOA should not be allowed to collapse. “The risks are such that it is necessary for all stakeholders to pause, and consider the possible consequences of their actions,” the E3 said.

They meant the United States of America. It was asked to pause. It stands isolated.

For the past year, these three European countries have worked to develop an alternative payment mechanism that would protect European firms from U.S. sanctions on Iran. This mechanism is known as the Instrument in Support of Trade Exchanges, or INSTEX. The mechanism is designed to allow Iran to export oil in exchange for food, medicine, medical devices, and other necessary goods. There is a shadow here of the UN’s Oil-for-Food Program that was developed in the 1990s to allow Iraq to export its oil.

Josep Borrell, the likely next foreign policy chief of the European Union, said this week, “We will do what we can to guarantee that there is no economic embargo against Iran and that European companies can continue working there.” He said that Spain would likely join France, Germany, and the UK in the INSTEX system. “It is very difficult” to develop INSTEX, he cautioned, “because U.S. laws apply in an extraterritorial manner, in a way that we don’t recognize.”

Abbas Mousavi, a spokesperson for Iran’s Foreign Ministry, said that his country hoped that Europe would take “practical, effective, and responsible steps” to implement the JCPOA.

While the E3 countries met to discuss Europe’s reaction to the U.S. withdrawal on July 14, Iran’s President Hassan Rouhani addressed a session in North Khorasan province. In these remarks, Rouhani said that Iran is “always ready for negotiation.” Iran, he said, urges the U.S. to “abandon bullying.”

Rouhani’s foreign minister—Javad Zarif—arrived at the United Nations in New York to urge once more the implementation of the JCPOA. Zarif will then go to Venezuela, Nicaragua, and Bolivia to shore up a new bloc of 25 countries opposed to U.S. unilateral sanctions.

An Iranian diplomat jokingly wondered if the E3—France, Germany, and the UK—would join this bloc of 25 states.