Pruitt, who was elected as Oklahoma’s top legal officer in November 2010, states on his own LinkedIn page that he “has led the charge with repeated notices and subsequent lawsuits against the U.S. Environmental Protection Agency for their leadership’s activist agenda and refusal to follow the law.”

Although the president-elect will not be able to completely cancel Obama’s historic carbon emissions standards for power plants, having a legally experienced EPA head can help “substantially weaken, delay or slowly dismantle them,” the New York Times reported.

Pruitt was among a handful of other attorneys general that began planning as early as 2014 a coordinated legal effort to fight the Obama Administration’s climate rules. That effort has resulted in a 28-state lawsuit against the Clean Power Plan. The case is now pending in federal court, but likely to advance to the Supreme Court, the New York Times said.

Watch this Fox Business interview with Pruitt in August 2015 when he was leading the charge against the EPA’s guidelines on emissions, calling the 2015 EPA rules a power grab:

Trump’s latest appointee falls in line with his other cabinet picks who deny the overwhelming scientific consensus that human activity is causing climate change. Pruitt once wrote an editorial questioning “the degree and extent of global warming and its connection to the actions of mankind.”

Keith Gaby, the senior communications director of the Environmental Defense Fund, noted that since 2002, Pruitt has “received more than $314,996 from fossil fuel industries.” In 2014, Pruitt was infamously caught sending letters to President Obama and federal agency heads asserting that the EPA was overestimating the air pollution from drilling for natural gas in Oklahoma. Turns out, the letter was by lawyers for one of state’s largest oil and gas companies, Devon Energy.

Pruitt’s appointment has been met with unprecedented criticism by environmental and health organizations nationwide.

“By appointing Scott Pruitt as head of the Environmental Protection Agency, Trump is putting America at risk,” Greenpeace spokesperson Travis Nichols said. “Pruitt is a pure product of the oil and gas industry, installed in successive government posts to sell out his constituents at every turn. He will push this country far behind the rest of the world in the race for 21st century clean energy. With Scott Pruitt as head of the EPA, the people and the environment will be in the hands of a man who cares about neither.” 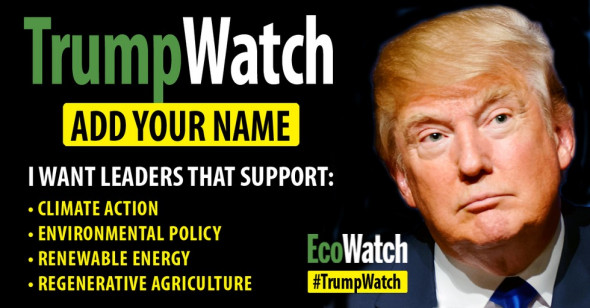 Rhea Suh, president of the Natural Resources Defense Council, agrees. “The mission of the EPA and its administrator requires an absolute commitment to safeguard public health and protect our air, land, water and planet. That’s the litmus test. By naming Pruitt, President-elect Trump has flunked,” Suh exclaimed.

Suh wrote in a blog post on Monday that “over the past five years, Pruitt has used his position as Oklahoma’s top prosecutor to sue the EPA in a series of attempts to deny Americans the benefits of reducing mercury, arsenic and other toxins from the air we breathe; cutting smog that can cause asthma attacks; and protecting our wetlands and streams.”

Why we should never get over the U.S. House Science Committee’s Breitbart tweet: @EcoWatch https://t.co/uhNh24yRCF #climate

And the outcry didn’t stop there. Ken Cook, president of Environmental Working Group, said, “It’s a safe assumption that Pruitt could be the most hostile EPA administrator toward clean air and safe drinking water in history.” CEO and president of Defenders of Wildlife, Jamie Rappaport Clark, added, “We need a leader for EPA who fully appreciates the gravity of the menace that climate change poses for our nation’s public health, our wildlife and our environment, and is prepared to use the full force of our nation’s strong environmental laws to curb that threat. Mr. Pruitt is plainly not that person.”

Food & Water Watch’s executive director, Wenonah Hauter, shared her dismay, too. Pruitt has championed the interests of industrial agriculture in his state, supporting a dubious, deregulatory ‘right to farm’ initiative that residents rightly rejected at the ballot box this year. He’s also sued the EPA over the Waters of the U.S. rule that effectively strengthens the Clean Water Act.”

“Pruitt is a wholly owned subsidiary of the oil industry,” Kassie Siegel, director of the Center for Biological Diversity’s Climate Law Institute, said. “Any Senator who doesn’t fight this nomination is handing corporate polluters a wrecking ball to destroy our future.”

World Resources Institute’s Director Sam Adams said, Americans depend on EPA to promote human health and protect families and future generations. Its ability to protect air, water, and the climate for all people must continue.”

Friends of the Earth climate and energy program director Benjamin Schreiber concurred. “As the Attorney General, Scott Pruitt did the bidding of the oil and gas industry and fought many of the laws he will now be tasked to enforce,” Schreiber said. “He helped Big Oil turn Oklahoma into an Earthquake zone.”