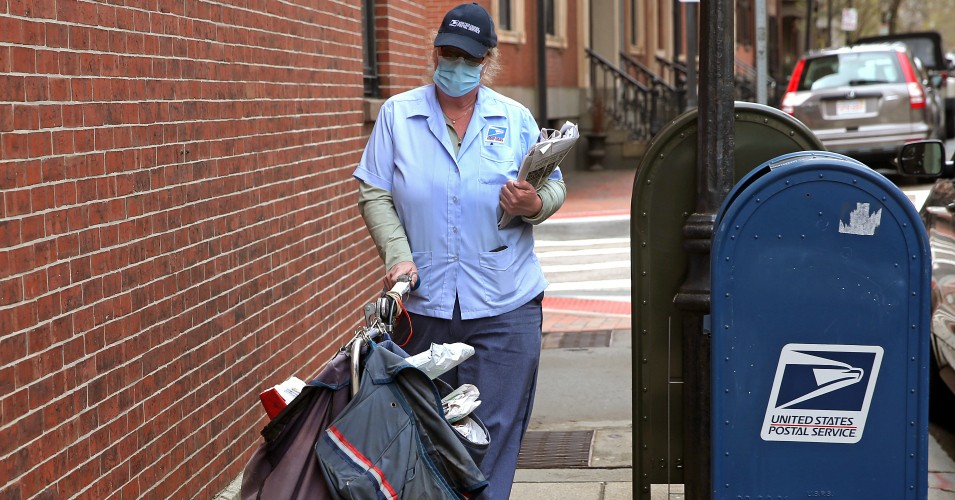 Above photo: A USPS postal worker wears mask while making deliveries in Beacon Hill in Boston during the COVID-19 pandemic on April 8, 2020. David L. Ryan/The Boston Globe via Getty Images.

NOTE: CLICK HERE TO LEARN ABOUT ACTIONS YOU CAN TAKE TO SAVE THE POSTAL SERVICE.

No one else can deliver essential goods to every home in the United States.

But the president is dismissing dire warnings of an imminent USPS collapse, falsely claiming that postal financial woes are self-inflicted.

The financially strapped United States Postal Service wound up with crumbs in the $2.2 trillion stimulus deal, despite playing a vital role in our nation’s public health and economic stability at this time of crisis.

Rep. Gerry Connolly (D-VA) accused President Trump of personally intervening to strip a Democratic postal rescue proposal from the final bill. Asked on Tuesday for his response, Trump lashed out at the beleaguered Postal Service with a stream of false accusations.

“They lose money every time they deliver a package for Amazon or these other internet companies,” Trump said. “If they’d raise the prices by, actually a lot, then you’d find out that the post office could make money or break even. But they don’t do that…Tell your Democrat friend that he should focus on that.”

For years now, Trump has repeated the lie that USPS loses money through its contracts with Amazon and other private corporations to handle the last legs of their deliveries. A task force Trump himself commissioned in 2018 contradicted that argument. In its most recent quarterly statement, USPS reported a 2.3 percent increase in revenue from parcel delivery and increased revenue per package.

The real cause of the Postal Service’s immediate financial crisis is the coronavirus pandemic. Mail volumes have plummeted under the economic shutdown and package delivery profits cannot make up for the loss. USPS management has warned that mail volume and revenue could drop by 50 percent or more this year.

What’s behind Trump’s attacks? Support for the Postal Service crosses partisan lines. And you’d think a bit more compassion might be in order at a time when postal workers are on the frontlines, straining to meet the skyrocketing need for home deliveries of essential goods.

But playing hardball on crisis aid gives Trump and others in his administration the leverage they’ve been seeking for years to gut the public Postal Service. The crumbs in the stimulus law amount to $10 billion in additional debt, subject to conditions imposed by Treasury Secretary Steven Mnuchin.

By contrast, House Democrats had proposed a $25 billion cash infusion to prevent the Postal Service from possible collapse. It’s also stingy compared to the benefits offered to USPS competitors Fedex and UPS. Under the airline bailout, both of these companies are eligible for a portion of the $4 billion in cash assistance for payroll support and another $4 billion in loans and loan guarantees for air cargo carriers.

While Mnuchin’s loan conditions are not public, they likely echo recommendations from the 2018 task force he chaired, which included partial privatization, draconian cuts to wages and services, and elimination of employee collective bargaining rights.

Unlike many other industries, the Postal Service cannot furlough workers and still achieve its essential mission. Like health care professionals and emergency responders, postal workers are essential to our public health because their deliveries make it possible for people to stay at home and not spread the virus. Millions of people are relying on them to deliver medications and other essential goods, as well as the stimulus checks they’re waiting for to help cover their bills. Come November, postal workers will also be needed to protect the integrity of our election system by facilitating vote by mail.

Without the Postal Service’s network of 157 million daily delivery points and 35,000 post offices, there would be no way to carry out these essential activities. Jacking up package delivery rates now, as Trump is demanding, would harm postal customers, particularly in rural areas — just when they need these services most.

Postal workers are rising to the challenge of a crisis unlike any we’ve ever experienced.

The last thing they need is for the president to dismiss the gravity of the Postal Service’s financial situation. Hardball tactics might make sense in real estate deals. In this case, they could be devastating for every community in this country.

Trump and leaders in Congress must heed their call and immediately deliver direct relief on the scale needed to save our public Postal Service and the many businesses and families that depend on it.

Sarah Anderson directs the Global Economy Project at the Institute for Policy Studies and co-edits Inequality.org. Follow her at @SarahDAnderson1.