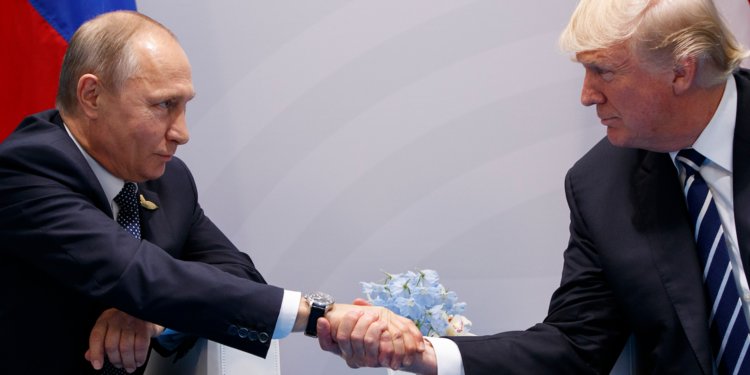 The announced meeting between Trump and Putin has already produced a good result by revealing the hypocrisy of the media and politicians. The meeting has been branded as the greatest danger to humanity, according to the Western globalist elite, because of the danger that “peace could break out between Russia and the United States”.

Sometimes reality is stranger than fiction. The following so stretches credulity that sources will have to be cited and an exact quotations given to be believed.

A case in point is the following title: “Fears growing over the prospect of Trump ‘peace deal’ with Putin”. The Times does not here fear a military escalation in Ukraine, an armed clash in Syria, a false-flag poisoning in England, or a new Cold War. The Times does not fear a nuclear apocalypse, the end of humanity, the suffering of hundreds of millions of people. No, one of the most authoritative and respected broadsheets in the world is fearful of the prospect of peace! The Times is afraid that the heads of two nuclear-armed superpowers are able to talk to each other. The Times fears that Putin and Trump will be able to come to some kind of agreement that can help avert the danger of a global catastrophe. These are the times in which we live. And this is the type of media we deal with. The problem with The Times is that it forms public opinion in the worst possible way, confusing, deceiving, and disorienting its readers. It is not by accident the world in which we live is increasingly divorced from logic and rationality.

Even if the outcome of this meeting does not see any substantial progress, the most important thing to be achieved will be the dialogue between the two leaders and the opening of negotiation channels for both sides.

In The Times article, it is assumed that Trump and Putin want to reach an agreement regarding Europe. The insinuation is that Putin is manipulating Trump in order to destabilize Europe. For years now we have been inundated with such fabrications by the media on behalf of their editors and shareholders, all part of the deep state conglomerate. Facts have in fact proven that Putin has always desired a strong and united Europe, looking to integrate Europe into the Eurasian dream. Putin and Xi Jinping would like to see a European Union more resistant to American pressure and able to gain greater independence. The combination of mass migration and sanctions against Russia and Iran, which end up hurting Europeans, opens the way for alternative parties that are not necessarily willing to Washington’s marching orders.

Trump’s focus for the meeting will be to convince Putin to put even more pressure on Europe and Iran, perhaps in exchange for the recognition of Crimea and the ending of sanctions. For Putin and for Russia it is a strategic issue. While sanctions are bad, the top priority for Moscow remains the alliance with Iran, the need to further strengthen relations with European countries, and to defeat terrorism in Syria. Perhaps only a revision of the ABM treaty and the withdrawal of these weapons from Europe would be an interesting offer for Putin. However, reality shows us that the ABM treaty is a pillar of Washington’s military-industrial complex, and that it is also Eastern European countries that want such offensive and defensive systems in their own countries, seeing them as a deterrents against Russia. Are they victims of their own propaganda, or are billions of dollars pouring into their pockets? Either way, it does not really matter. The most important point for Moscow will be the withdrawal of the Aegis Ashore ABM systems as well as military ships with the same Aegis system. But this is not something that Trump will be able to negotiate with his military leaders. For the military-industrial complex, the ABM system, thanks to maintenance, innovation and direct or indirect commissions, is a gravy train that too many interests intend to keep riding.

From the Kremlin’s point of view, the removal of sanctions remains necessary for the restoration of normal relations with the West. But this would be difficult to achieve, given that Moscow would have little to offer Washington in exchange. The strategists at the Pentagon demand a withdrawal from Syria, an end to support for Donbass, and a cessation of relations with Iran. There is simply too much divergence to reach a common position. Moreover, Europe’s sanctions against Russia benefit Washington, as they hurt the Europeans and thereby undermine what is a major trading competitor to the US. The US withdrawal from the Joint Comprehensive Plan of Action (JCPOA) can be looked at in the same light, blocking US allies from doing business with Iran.

Putin will keep faith with his commitments to Syria and with his allies, unwilling to betray his word even for the recognition of Crimea. On the other hand, as already mentioned, the priority remains the removal of the ABM; and while Crimea is already under the control of the Russian Federation, Syria remains an unstable territory that risks propelling Islamist terrorism to Russia’s soft underbelly in the Caucasus. For Moscow, involvement in Syria has always been a matter of national security, and this certainly remains the same now, even with Donald Trump’s unrealistic offers.

It should be kept in mind that Putin is aiming for a medium- to long-term strategy in the Middle East, where Iran, Syria and the entire Shiite arc serves to counter Saudi and Israeli aggression and hegemony. This strange alliance has emerged as the only way to deter war and dial down the heat in the region, because the crazy actions from Netanyahu or Mohammad bin Salman are deterred by a strong Iranian military. Preventing a confrontation between Iran and Saudis/Israelis also means not making Tehran appear weak or isolated. Such considerations seem beyond the strategists in Washington, let alone in Tel Aviv or Riyadh.

While it is difficult to achieve a positive outcome from the meeting between Trump and Putin, it is important that there is a meeting in the first place, contrary to what The Times thinks. The media and the conglomerate of power that revolves around the US deep state fear diplomacy in particular. The same narrative that was proclaimed weeks before and after the meeting between Trump and Kim Jong-un is being repeated with regard to Trump’s meeting with Putin.

Washington bases its power on force, both economic and military. But this power also rests on the posture assumed and image projected. The United States and its deep state considers negotiating with opponents to be wrong and counterproductive. They consider dialogue to be synonymous with weakness, and any concession is interpreted as surrender. This is the result of 70 years of American exceptionalism and 30 years of Unipolarity, has allowed the US the ability to decide unilaterally the fate of others.

Today, in a multipolar world, the dynamics are different and therefore more complex. You cannot always employ a zero-sum mentality, as The Times does. The rest of the world recognizes that a dialogue between Putin and Trump is something positive, but we must not forget that, as in Korea, if diplomacy does not bring significant progress, then the hawks surrounding Trump will again be in the ascendant. The tasks for Rouhani, Putin and Kim Jong-un are complex and quite different from each other, but they share in common the belief that dialogue is the only way to avoid a catastrophic war. But apparently, peace is not the best possible result for everyone.