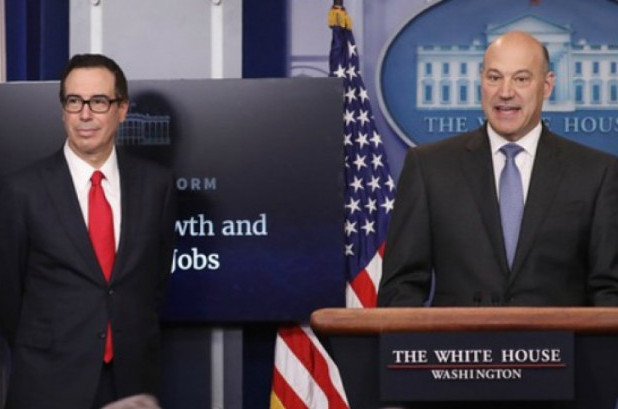 President Donald Trump unveiled his latest giveaway to corporations and the ultra-wealthy on Wednesday, with a tax plan that would, according to one analyst, “personally help Trump enormously.”

The proposal, as outlined by Goldman Sachs alums and Trump administration officials Gary Cohn and Steven Mnuchin at the White House, would cut tax rates for businesses from (a rarely paid) 35 percent to 15 percent—a plan described this week by former Labor Secretary Robert Reich as “truly dumb.”

Trump’s package would also involve a “pass-through” tax cut on business income that is currently taxed at the business owners’ individual income tax rates rather than the corporate rate. Such a tax cut is also a centerpiece of House Speaker Paul Ryan’s (R-Wis.) “Better Way” plan, and as the Center on Budget and Policy Priorities (CBPP) notes, “would overwhelmingly benefit high-income people and create a costly loophole.” (Trump himself is said to have 500 pass-through arrangements.)

Eileen Applebaum, a senior economist with the Center for Economic and Policy Research (CEPR), further explained:

During the campaign, President Trump proposed reducing the top tax rate on pass-through income to 15 percent—a tax break that would benefit him tremendously. Speaker Paul Ryan’s proposed tax plan would reduce the top rate to 25 percent. Both have claimed this reduction would benefit small business owners and grow the economy. However, these proposed cuts in the pass-through tax rate benefit only a small number of wealthy households; the majority of business owners and partners are already taxed at rates lower than Ryan’s or Trump’s proposed top rates.

Decrying Trump’s proposal as “a very big step in precisely the wrong direction,” the Economic Policy Institute’s Josh Bivens and Hunter Blair wrote of the pass-through tax cut that “it will help private equity managers and people like President Trump: wealthy people who will now be able to reconfigure their taxes by reclassifying themselves as independent contractors. This isn’t theory, this is exactly what happened in Kansas.”

In that state, Blair elaborated in a separate post on Wednesday, establishing a pass-through loophole led to “even more lost tax revenue.”

Another aspect of Trump’s plan would eliminate the alternative minimum tax, or AMT, which was established to ensure that the super-rich are not able to use loopholes to escape their tax liability altogether. Trump’s 2005 tax return showed that for that year, “he paid 25 percent of $153 million in taxable income instead of the less than 4 percent that he would have paid without” the AMT, as the New York Times reported when the return was released last month.

Cohn also announced that the administration’s proposal would repeal the so-called “estate tax” on holdings transferred from deceased people to their heirs. CBPP’s deputy director on federal tax policy Chye-Ching Huang said its elimination amounted to a “windfall for heirs of [the] wealthiest,” pointing to an analysis that showed only the heirs of the wealthiest two out of every 1,000 estates will face any estate tax.

In fact, former national economic advisor to Presidents Bill Clinton and Barack Obama Gene Sperling argued this week in The Atlantic that rather than cutting the estate tax, Trump should raise it.

Responding to Wednesday’s announcement, Americans for Tax Fairness was just one voice in a chorus vowing to “fight this tax plan tooth and nail.”

“President Trump has brought his reckless tax plan from the campaign into the White House, and the math still doesn’t add up,” said Frank Clemente, the group’s executive director. “To pay for massive tax giveaways to corporations, the wealthy, and his own family, he will add trillions of dollars to the deficit.”

Weissman said Trump’s proposal is “dead on arrival,” and indeed, the plan faces an uphill battle in Congress, even among Republicans.

Democrats are strongly opposed. For his part, U.S. Rep. Ted Lieu (D-Calif.) denounced the plan as “voodoo economics on steroids. If you believe in magic, unicorns, or Batman,” he wrote on Twitter, “this plan is for you.”