Above Photo: A man holds a sign during a protest for the shooting death of Walter Scott at city hall in North Charleston, S.C., Wednesday, April 8, 2015.  Scott was killed by a North Charleston police officer after a traffic stop on Saturday. The officer, Michael Thomas Slager,  has been charged with murder. (AP Photo/Chuck Burton)

AlterNet‘s Sarah Lazare (12/6/16) quotes Jim Naureckas on a call for an FBI crackdown on protesters appearing in the New York Observer (12/2/16), the paper owned by Trump son-in-law and advisor Jared Kushner:

Jim Naureckas, editor of Extra!, the media watchdog magazine of Fairness & Accuracy In Reporting, told AlterNet that [Austin] Bay’s op-ed is one of the most disturbing things he has seen since the election. “To have the incoming ruler’s son-in-law using his paper to call for the federal police to investigate protests against the ruler, that is pretty far gone,” he said. “It struck me as a ‘first they came for the communists’ moment.”

“He ties up this conspiracy of protesters, people seeking recounts and George Soros into one vast conspiracy that the FBI ought to get to the bottom of,” Naureckas continued. “It shows you the outlines of how you would justify a complete crackdown on dissent. It’s frightening.” 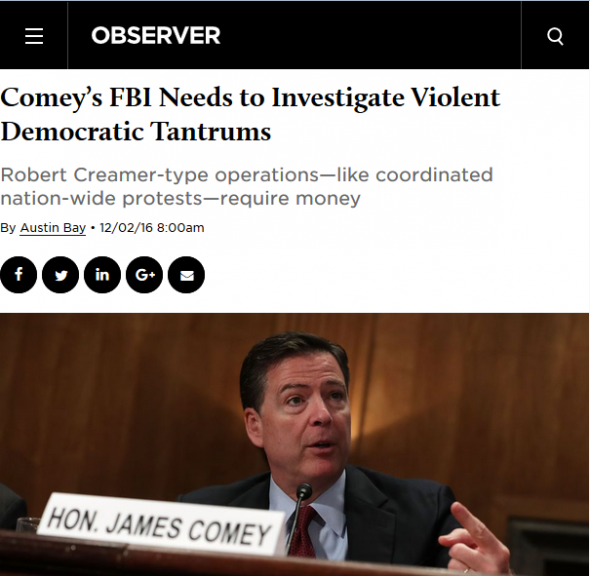 Trump’s son-in-law’s paper calls for “a thorough probe of the protests—to include possible ties to organizations demanding vote recounts”—that “continue to mar the presidential election’s aftermath.”