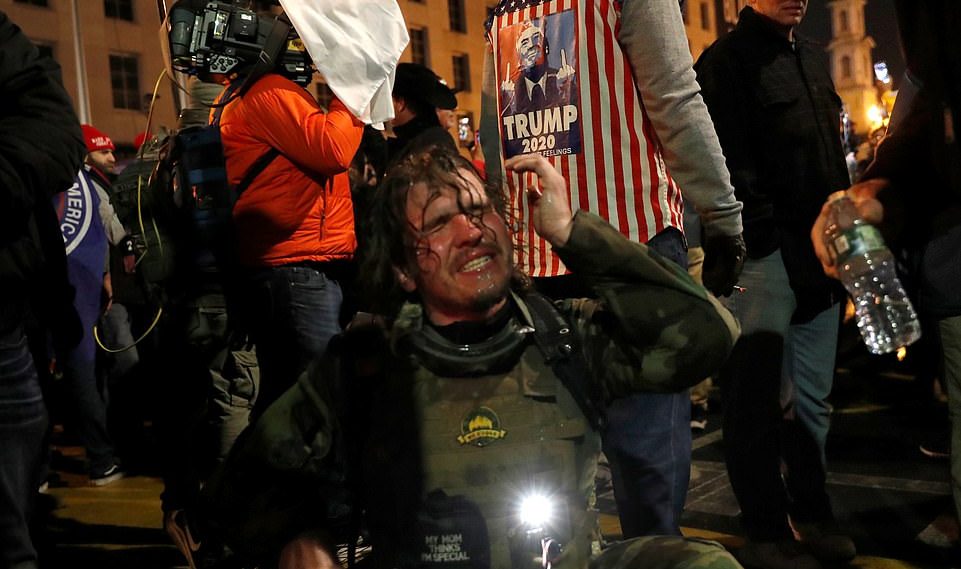 Above photo: A Trump supporter is seen recovering from being tear gassed as protests turned violent. Reuters.

NOTE: This story will be updated during the day. Click here to find the updates.

Despite election officials across the country finding no instances of widespread fraud, the president’s supporters and far-right groups have descended on D.C. for a third time in recent months — prompting local leaders, business owners, and city residents to prepare for potentially violent demonstrations.

Wednesday morning, a boarded-up downtown D.C. filled with Trump flags, MAGA hats, and some outlandish outfits as thousands gathered near the Ellipse, where President Trump will speak at 11 a.m. Some supporters lined up along Constitution Avenue overnight in anticipation of his remarks.

From Tuesday afternoon into Wednesday morning, the Metropolitan Police Department made 10 arrests on gun-related charges, assault, assault on a police officer, and crossing a police line.

Local officials and law enforcement agencies are prepared for potential violence, and have urged residents to avoid downtown areas, including Freedom Plaza, the U.S. Capitol, and the Supreme Court. In addition to D.C. Police, U.S. Park Police and the Secret Service will assist in monitoring the day’s events, and D.C. Mayor Murial Bowser has enlisted the D.C. National Guard to help with traffic and crowd control. Acting D.C. Police Chief Robert Contee has emphasized D.C.’s strict gun restrictions (laws that the president’s supporters have tried to flout, including a new congressmember), and signage throughout downtown articulates that firearms are prohibited within 1,000 feets of the signs.

Several businesses near the rally locations will close or modify their operations Wednesday — including Harry’s Bar and Hotel Harrington, popular hangouts for the Proud Boys and the site of stabbings during November’s demonstrations.

The Proud Boys, an extremist group of self-described “western chauvinists” with ties to white supremacy, has threatened violence on the city ahead of this week’s rallies. During two previous election protests in November and December, the group was involved with multiple stabbings, and the destruction of Black Lives Matter banners at historically Black D.C. churches. The groups’ chairman, Enrique Tarrio, who claimed responsibility for destroying one such banner during December’s demonstrations, was arrested in D.C. on Monday on property damage and gun-related charges, and was banned from the city by a judge.

While past MAGA rallies have been met with resistance from counterprotesters, Black Lives Matter D.C., which has urged local hotels throughout the week to close, tweeted Wednesday morning that they “will not be downtown Protecting a System that is not built for Black and Brown people.”

“We will be in our marginalized neighborhoods, continuing mutual aid and supporting comrades remotely who will try and keep vulnerable people in the downtown area safe as possible,” reads the tweet.