Some are Met with Deadly Force.

Washington, DC — In one of the darkest days in U.S. legislative history, Trump supporters rioted and breached the North side of the U.S. Capitol today as thousands rallied outside urging the Congress to overturn the result of the Presidential election. The Trump mob penetrated the building by force while a joint session of Congress was already in session to count the certificates of U.S. States, finalizing the votes of the Electoral College, as provided by the Constitution.

Capitol police allegedly responded with teargas and a volley of live fire inside the legislative body. One woman died on the scene from a gunshot wound in her neck and three others died by “medical emergency” according to Capital Police. One individual was reportedly stabbed but it is unclear who was responsible for this incident.

Rioters breached the House side of the Legislative Body while it was in session. They also rampaged through House Speaker Nancy Pelosi’s office.

The incidents were shortly thereafter followed by more Trump supporters breaching the police entrance at the West side of the U.S. Capitol. U.S. Capitol Police successfully blocked the breach about 10-feet into the entrance. About 30 minutes later police responded with flash-bangs, teargas and batons, beating back the mob of hundreds who were by then breaking windows and entering the building. Dozens fought with police as they were pushed back and off the steps of the West side. Over 100 U.S. Capitol Police outfitted with riot gear formed cordons as they deployed flash bangs and teargas. There were no arrests observed at the West side of the Capitol during this subsequent breach.

D.C. Mayor Muriel Bowser declared a 6 PM curfew as a result of the Trump supporters’ mob actions. Trump supporters identified themselves as travelers from States across the country, including North Dakota, Tennessee, South Carolina, Georgia, and other States. The mob consisted of visitors to DC who were egged on by unsubstantiated Presidential proclamations that the election was stolen.

Earlier in the day, a group of conservative legislators objected to the certificate of Electoral College votes from the State of Arizona. This resulted in suspension of the vote counting procedures and forced a House debate on the objection. It was about this time that the mob breached the Capitol building, causing the Legislature to adjourn for the test of the day. At the time of this publication the vote tally is still incomplete. 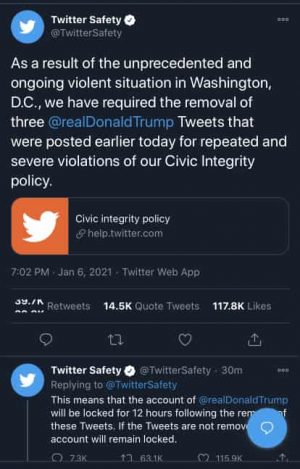 At 7 PM, Twitter responded to a series of three Presidential messages posted on its platform earlier in the day, by locking Trump’s account for the first time. Twitter announced the account would be locked for 12 hours following the removal of the messages. “If the messages are not removed the account will remain locked,” the announcement read.

“As a result of the unprecedented and ongoing violent situation in Washington, DC, we have required the removal of three [presidential] tweets that were posted earlier today for repeated and severe violations of our integrity policy,” a subsequent message from the Twitter Safety account read.

Later in the evening, Trump supporters descended into the downtown K Street area of Washington, DC where they continued violent confrontations at Black Lives Matter Plaza. A group of Trump supporters challenged and fought with a group of activists who were already in the Plaza. The fighting resulted in several injuries. A brick was thrown injuring one man in the leg and a Trump supporter was knocked out (video).

Today’s events mark a pivot point and a dark testimonial to a fractious democracy. The keystone of the democratic process in this country appears to be falling under its own weight. It should be noted that for years the Legislative Body has been unable to work past its own partisanship and to guide itself past its own internal squabbles. It may very well take the country down with it..

We will update this story as new developments are learned.