Above Photo: KEITH BEDFORD / REUTERS. Wilbur Ross owned West Virginia’s Sago Mine in 2006 when an explosion led to the deaths of 12 men.

Donald Trump promised during his campaign to bring back mining jobs to struggling workers in coal country. Now the president-elect has tapped for commerce secretary a Manhattan billionaire who owned a West Virginia coal mine where 12 workers died in 2006.

On Wednesday morning, Trump announced the nomination of hedge fund titan Wilbur Ross, 78, to lead the Department of Commerce.

“Wilbur Ross is a champion of American manufacturing and knows how to help companies succeed,” Trump said in a statement. “Wilbur knows that cutting taxes for working families, reducing burdensome government regulations and unleashing America’s energy resources will strengthen our economy at a time when our country needs to see significant growth.”

The announcement came at the same time as the nomination of Chicago Cubs co-owner Todd Ricketts as Ross’ deputy and Goldman Sachs veteran Steven Mnuchin as treasury secretary.

Ross, whose job as commerce secretary will be to promote economic growth and improve living standards across the country, seems an odd choice for a president who campaigned as an economic populist. The New Jersey native’s cutthroat investment strategy of snatching up ailing businesses presents an appealing narrative to investors, particularly those who believe the U.S. has lost its competitive edge in a global economy.

But many of those turnaround stories have a human toll attached.

“It’s really the height of hypocrisy when people are counting on you to turn around the economy for them and to bring back coal jobs that you’re naming someone who’s never done anything to help working-class people,” attorney Tony Oppegard, a former mine safety official who now represents miners in his private practice, told The Huffington Post. “Trump portraying himself as the savior of the working class was just a con job.”

In August, Ross’ investment firm WL Ross & Co. agreed to pay a $2.3 million fine to the U.S. Securities and Exchange Commission to settle charges that it failed to disclose fees it charged investors.

In 2012, Ross, clad in purple velvet slippers, took the stage at a black-tie induction ceremony for the secretive Wall Street fraternity Kappa Beta Phi and sang show tunes mocking poor people, according to a reporter who sneaked into the event. Two years later, Ross declared that “the 1 percent is being picked on for political reasons.”

In 2004, Ross bought Cone Mills, a struggling textile producer in North Carolina, and merged it with another firm to create International Text Group. The company, later renamed Cone Denim, laid off hundreds of workers and outsourced jobs to emerging markets, where labor is cheaper.

“I thought Trump was going to change some things, stop shipping all these jobs overseas,” Rep. Walter Jones (R-N.C.) told The Daily Beast. “The base that helped him win ― the base is looking for certain promises to be kept.”

But in 2002, after spending decades as an investment banker, Ross earned the nickname “bottom feeder” when he started buying up decaying steel mills and coal mines. In 2004, he began the process of purchasing some mines owned by the bankrupt coal giant Horizon Natural Resources ― but only after a bankruptcy judge stripped thousands of miners, some with black lung disease, of their medical coverage and union status. 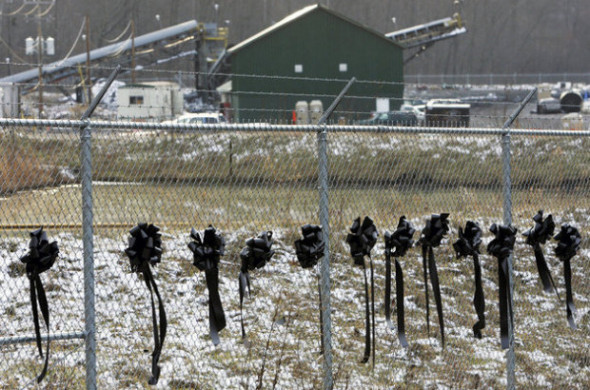 JASON COHN / REUTERS Twelve ribbons line a fence in front of the Sago Mine in Sago, West Virginia, in 2006.

Among the mines Ross bought was Sago Mine, where a dozen miners died after an early-morning explosion on Jan. 2, 2006.

Ross completed the purchase in March 2005, the same year the federal Mine Safety and Health Administration cited Sago for 208 violations, up from 68 a year earlier. More than half of those violations were labeled “serious and substantial,” including 20 dangerous roof falls, 14 power wire insulation problems and three cases of inadequate ventilation plans, according to The Christian Science Monitor.

“He certainly had the authority to try to make a difference and make sure those mines were operated differently. In my view, they were a bunch of dog-hole mines,” Oppegard said, using an Appalachian slang term for unsafe mines. “Bottom line is to get as much coal out as cheaply as possible and get as much coal as possible. That’s what a dog hole is.”

Ross, who said after the explosion that he feared he’d be “in the way” if he flew from New York to West Virginia, promised to pay $2 million total to the families of the dead workers.

“For the rest of my life, the memory of those who died at Sago will haunt me,” Ross told New York magazine after the disaster. “That will never go away. I know that the families will wonder whether there wasn’t something more I could have done to make sure their loved ones would still be alive.”

But for many miners, that wasn’t enough.

“It’s easy to throw a couple million afterward instead of spending a few million ahead of time to save men’s lives in the first place,” Kevin Sharp, also a relative of one of the miners, said in the ABC News report.

Three years after the disaster, Ross shuttered the Sago mine. Two years after that, he sold International Coal Group, the company that owned Sago, to Arch Coal. That company emerged from bankruptcy in October following rounds of mass layoffs earlier this year. Arch declined to comment on how many workers were pink-slipped.

This story has been updated to include confirmation that Trump nominated Ross, Ricketts and Mnuchin.