Trump Threatens To Grab Protestors By The Posse

Above photo: Troops load up into personnel carriers to take them toward the city from the Joint Force Headquarters of the D.C. National Guard on June 2, 2020 in Washington, DC. Drew Angerer/Getty Images.

Donald Trump has threatened to unleash “the unlimited power of our Military” to quell the Minnesota uprising, using the U.S. army to essentially “invade” a state without a governor’s consent, writes Joe Lauria.

President Donald Trump has threatened to send “active duty” U.S. military to Minnesota to quell the uprising against the police killing of yet another unarmed African-American even though the state’s governor had not accepted Trump’s offer.

The president made his intention known in a series of tweets on Friday: 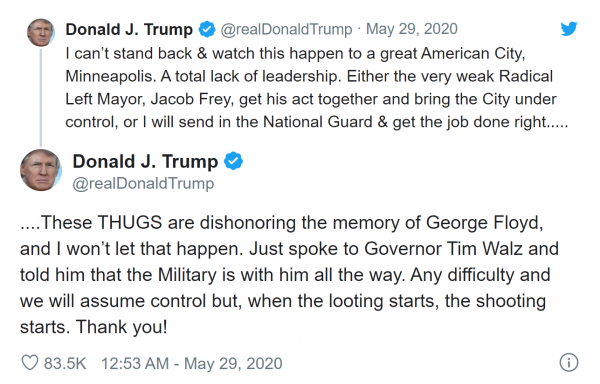 Trump said “we will assume control,” clearly meaning the federal government. The National Guard of each state is controlled by the state governor.

The Washington Post reported that the Trump administration has offered “the use of active-duty soldiers and intelligence,” including “some forces who were put on alert to deploy.”

The New York Times and other media said “military police” were being prepared by the Pentagon and that it would be the first deployment of MPs since the Rodney King uprisings  in Los Angeles of 1992.

Trump’s threats to deploy federal troops raise the legal question of whether the U.S. federal army can be deployed on U.S. soil for law enforcement purposes.

After federal troops had put down the Confederate rebellion in 1865, they continued to occupy southern states for another 12 years.  When the 1876 presidential election between Republican Rutherford B. Hayes and Democrat Samuel J. Tilden ended in a virtual deadlock, with 20 electoral votes unresolved, Southern states allowed Hayes to become president in exchange for the removal of federal troops in what became known as the Compromise of 1877.

After Hayes soon reneged on the deal and deployed federal troops to put down the  Great Railroad Strike of 1877, Congress passed the Posse Comitatus Act of 1878 to codify the agreement. The Act today reads:

“Whoever, except in cases and under circumstances expressly authorized by the Constitution or Act of Congress, willfully uses any part of the Army or the Air Force as a posse comitatus or otherwise to execute the laws shall be fined under this title or imprisoned not more than two years, or both.”

The exceptions authorized by Congress would be critical. In 1957, President Dwight D. Eisenhower found an exception to the Act to return federal troops South to Little Rock, Arkansas to enforce desegregation of the schools after the governor refused to obey a 1954 Supreme Court decision ruling school segregation unconstitutional.

Eisenhower drew on the Enforcement Acts of 1870 and 1871 that enforced blacks’ rights to vote, hold office, serve on juries and get equal protection under the law.

In July 1967, President Lyndon Johnson sent 5,000 federal troops to Detroit, the 82nd and 101st Airborne Divisions, after a request from the Michigan governor to put down five-days of rioting sparked by a police raid on an African-American, unlicensed, after-hours bar.

Johnson told a national television audience that he was acting under the “Constitution” and “the statutes,” though he did not name them.

The Detroit uprising was the worst in the U.S. since the 1863 Draft Riot in New York City.  After five days, 41 people were dead, and more than 1,300 buildings burned.

In 1992, President George H.W. Bush deployed 4,000 Army and Marine troops to Los Angeles to put down riots after the police who beat Rodney King were acquitted. Bush’s exception was to invoke the 1807 Insurrection Act.  It reads today:

“Whenever the President considers that unlawful obstructions, combinations, or assemblages, or rebellion against the authority of the United States, make it impracticable to enforce the laws of the United States in any State by the ordinary course of judicial proceedings, he may call into Federal service such of the militia of any State, and use such of the armed forces, as he considers necessary to enforce those laws or to suppress the rebellion.”

The Act does not require the agreement of local authorities for the president to deploy troops to put down an insurrection.

Bush’s son, George W. Bush, in 2006 successfully asked Congress to expand the Insurrection Act to allow deployment of federal troops in case of a natural disaster or a terrorist attack, thereby weakening the intent of the Posse Comitatus Act.

When Barack Obama signed the 2012 Defense Authorization Act on New Year’s Eve 2011, he  was agreeing to allow indefinite military detention of civilians in the U.S. and anywhere abroad. “There is substantial public debate and uncertainty around whether Sections 1021 and 1022 of the NDAA could be read even to repeal the Posse Comitatus Act and authorize indefinite military detention without charge or trial within the United States,” the American Civil Liberties Union said.

Given this legal background it appears Trump could follow through with his threat, even if local authorities don’t agree.

Francis Boyle, a University of Illinois professor of international law, said Attorney General William Barr “worked for [H.W.] Bush, he has been through this exercise before and is aware of what happened and the legal precedents and authority. I am sure he has advised Trump he can pull the Federal Trigger if he wants to no matter what the Minnesota governor wants.”

“My guess is Trump probably will,” said Boyle. “Makes him look like the Law and Order guy for the campaign. Distracts from his Covid-19 disaster.”  So far Trump seems satisfied with the Minnesota National Guard’s performance on Saturday night.

But it is chilling to think that he’s got the legal exceptions to round up a posse and send it to Minneapolis or any of the 48 cities that are on fire.

Joe Lauria is editor-in-chief of Consortium News and a former correspondent for The Wall Street Journal, Boston Globe, Sunday Times of London and numerous other newspapers. He began his professional career as a stringer for The New York Times.  He can be reached at joelauria@consortiumnews.com and followed on Twitter @unjoe.