Above photo from Popular Resistance’s trade campaign, Trade for People and Planet.

The Framework Remains Trade for Corporations While Undermining Health, the Environment, Food, and Worker Rights

Since the Clinton era, when the North American Free Trade Agreement (NAFTA) was created, global trade has been written by and for big corporations at the expense of people’s health, worker’s rights and the environment. Trump Trade – through the renegotiation of NAFTA – continues that approach.

In some areas, people might argue the new United States-Mexico-Canada Agreement (USMCA) makes improvements over NAFTA, although many details are still being withheld. From what we do know, overall, it is a step backward for people and planet. And it undermines the US’ relationship with Canada and Mexico, as Geoffrey Getz of the neo-liberal Brooking’s Institution writes, “Trump’s aggressive, threatening approach succeeded in eliciting modest concessions from two of its closest trading partners.”

Trump is claiming a political victory merely by reaching an agreement, but it is not a victory for people or planet, as will be described below. Trump Trade should be rejected. If we are to achieve a new model of trade that protects the environment, workers and democracy, we need to demonstrate that rigged corporate trade will be rejected every time it is brought forward. The time to organize to stop this agreement is now. 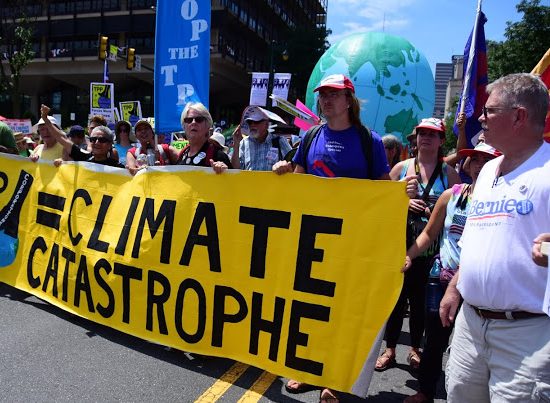 From Popular Resistance’s trade campaign, Trade for People and Planet.

Energy and the Environment

Trump withdrew from the Trans Pacific Partnership (TPP) because a mass social movement made it unacceptable and it could not pass in Congress. Some of the provisions in the TPP are included in the USMCA.

Like the TPP, the USMCA contains polluter-friendly non-binding terms on the environment, e.g., the text “recognizes that air pollution is a serious threat to public health,” but includes no single binding rule to reduce air pollution.

The Sierra Club reports the USMCA takes a significant step backward from environmental protections included in the last four trade deals by failing to reinforce a standard set of seven Multilateral Environmental Agreements that protect everything from wetlands to sea turtles. The absence of environmental enforcement continues the failed corporate trade of the Clinton-Obama eras.

Some keys to preventing greenhouse gas emissions are ‘Buy American’ and ‘Buy Local’ laws that provide incentives for locally-produced goods. The USMCA negates those laws, requiring that industries based in Canada and Mexico be given equal access to US government contracts.

The USMCA exempts oil and gas corporations that have, or may have, government contracts for offshore drilling, fracking, oil and gas pipelines, refineries, or other polluting activities from reforms to Investor State Dispute Settlement (ISDS) provisions. These intensely polluting corporations would be allowed to challenge environmental protections in rigged corporate trade tribunals.

Trump Trade  preserves a NAFTA rule that prevents the US government from determining whether gas exports to Mexico are in the public interest. This creates an automatic gas export guarantee, which will increase fracking, expand cross-border gas pipelines, and increase dependency on Mexican climate-polluting gas.

The USMCA gives corporations extra opportunities to challenge proposed regulations before they are final, and to repeal existing regulations. This makes it harder to put in place environmental regulations or rollback the pro-polluting regulations of the Trump era.

Food and Water Watch summarizes: “The energy provisions will encourage more pipelines and exports of natural gas and oil that would further expand fracking in the United States and Mexico. The text also provides new avenues for polluters to challenge and try and roll back proposed environmental safeguards, cementing Trump’s pro-polluter agenda in the trade deal.” 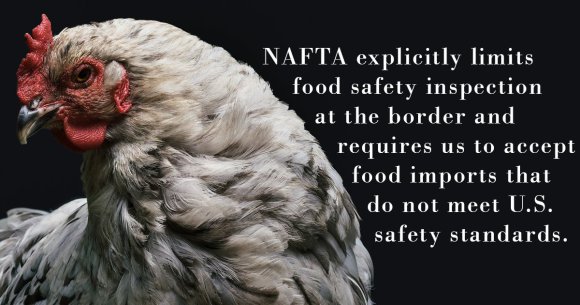 The USMCA undermines food safety and health by making it more difficult to regulate and inspect foods. It limits inspections and allows food that fails to meet US safety standards to be imported. Food and Water Watch states that it requires the US to “accept imports from Mexico with less scrutiny than from other countries. The deal even creates new ways for Canada and Mexico to second-guess US border inspectors that halt suspicious food shipments, which would have a dangerously chilling effect on food safety enforcement.”

USMCA serves Monsanto and other giant agro-chemical corporations by allowing unregulated GMOs, rolling back Mexico’s regulation of GMOs, and letting chemical giants like Monsanto and Dow keep data on the safety of their pesticides secret for 10 years. USMCA is designed for agribusiness, not family farmers and consumers.

Like the TPP, the USMCA increases the cost of pharmaceutical drugs through intellectual property protections that go “significantly beyond” NAFTA. USMCA gives pharmaceutical companies at minimum 10 years of market exclusivity for biologic drugs and protects US-based drug companies from generic competition, driving up the price of medicine at home and abroad. 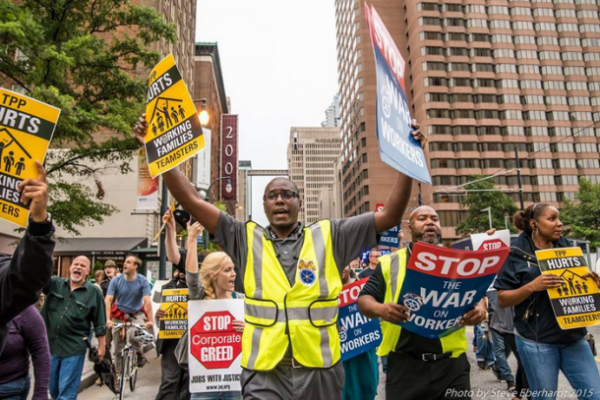 A protest against the Trans-Pacific Partnership in Atlanta, Georgia. Photo by Steve Eberhardt.

The Labor Advisory Committee on Trade Policy and Trade Negotiations (LAC) explained  they do not oppose trade, but, “We oppose a set of rules made largely by and for global corporations that reward greed and irresponsibility at the expense of hardworking families across the globe.” They describe the USMCA as moving backwards from the original NAFTA in many areas important to working families:

“including with respect to ‘Good Regulatory Practices’ (code for using this trade agreement to
attack important consumer, health, safety, and environmental protections), Financial Services (providing new tools for Wall Street to attack efforts to rein in its continuing abuses), and affordable medicines (extending monopolies for brand name pharmaceuticals at the expense of affordability).”

Similar to the environment sections, the labor sections do not provide enforcement mechanisms. Citizen’s Trade Campaign writes, “There is a ground breaking labor annex that could help eliminate Mexican protection contracts and boost labor rights there — but only if currently absent enforcement mechanisms are added.” As the Labor Advisory Committee states, “Unenforced rules are not worth the paper they are written on.” 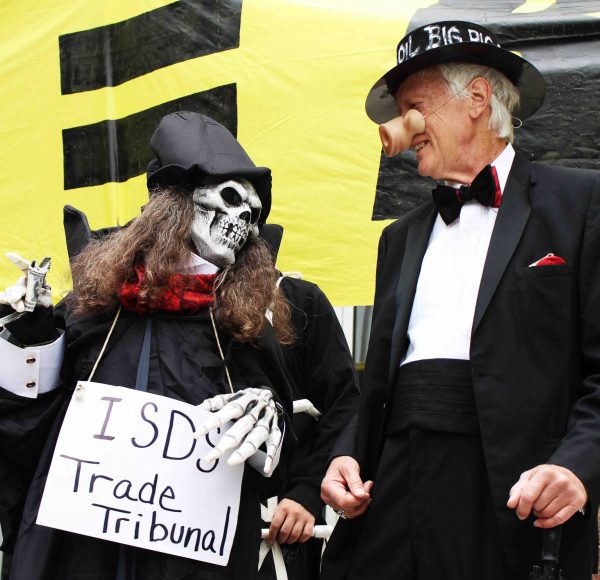 A major area of concern has been ISDS, trade tribunals where corporations can sue governments if new laws or regulations undermine their profits. ISDS empowers corporations to attack environmental and health laws in trade tribunals made up of three corporate lawyers and receive monetary judgments worth billions from tax dollars. The USMCA reduces but does not eliminate the unjustifiable and indefensible ISDS settlement mechanism, which privileges foreign investors over communities regarding access to justice.

After three years, ISDS would be eliminated with Canada and dramatically scaled back with Mexico with some unacceptable exceptions. After that, US and Canadian investors would use domestic courts or administrative bodies to settle investment disputes with another government. Are there workarounds to this ISDS reform that protect investors, e.g. will domestic courts seize assets within their country to repay investors, as a US court did for a Canadian mining company this year?

Regarding Mexico, the new process is designed to protect oil and gas industry investors from the privatization of Mexico’s oil and gas sector. Global Trade Watch writes, “several additional sectors were added, including railways and infrastructure. . . followed by an open-ended list, which could provide problematic flexibility for investors to argue that their investments qualify.” In other words, what looks like ISDS reform contains a giant loophole for corporations to continue to sue governments.

Under NAFTA, corporations can receive exorbitant awards for “expected lost profits.” Under USMCA, investors can only be compensated for losses that they can prove on the “basis of satisfactory evidence and that is not inherently speculative.” How this is interpreted is up to the courts. 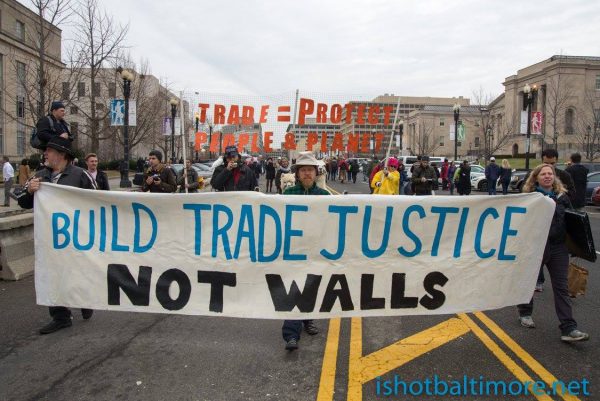 Popular movements in Mexico urge the incoming government to reject USMCA in an Open Letter To Andrés Manuel López Obrador And The Legislators Of MORENA. They decry the secret nature of the negotiation and the agreement as an attack on Mexico’s sovereignty. They argue the agreement will “further open up our economy for the sole benefit of the large U.S. transnational corporations, with an even greater subordination of our government to the dictates of U.S. foreign policy and its measures of internal security and migration.”

The letter describes the election of MORENA and Obrador as the people voting “to expel the oligarchy that has governed us, along with their paid servants.” The incoming government was given a clear mandate that includes rejecting corporate trade agreements. To create the transformation promised in the election requires Mexico to have full control of its resources and wealth to ensure the well-being of the population, with full rights and liberties. They see rejection of USMCA as a “first step toward reclaiming our nation.”

They urge incoming President Obrador to see this as part of the “mafia of power” that he ran against. They describe how Trump pressured the weakest negotiator, Mexico, with the right wing Peña Nieto administration, and used that to threaten Canada with exclusion and 25% tariffs if they did not agree.

Roger Jordan writes, the new agreement is an act of corporate imperialism by the United States:

“Under the new deal, both Mexico, a country historically oppressed by US imperialism, and Canada, a lesser imperialist power that has long been a key US ally, made significant concessions in the face of US demands that the continental pact be refashioned to make it an even more explicit US-led protectionist trade bloc.”

As the US struggles to retain power as a global empire, UMCA shows that “through ‘America First’ economic nationalism and the ruthless assertion of its interests against ostensible allies and rivals alike,” it will do what it must “to prevail in the struggle for markets and profits.”

Just as the TPP was President Obama’s attempt at economic domination of Asia, USMCA is part of President Trump’s economic war against China, which has already included “tariffs on $250 billion worth of Chinese goods.” Jordan explains how USMCA sent a message to China, writing:

“It grants the US effective veto power over any attempt by Canada or Mexico to negotiate a free trade pact with a ‘non-market economy,’ a clear reference to China. This includes the right to transform USMCA into a bilateral agreement, excluding the third member if it has ratified such a free trade deal.” 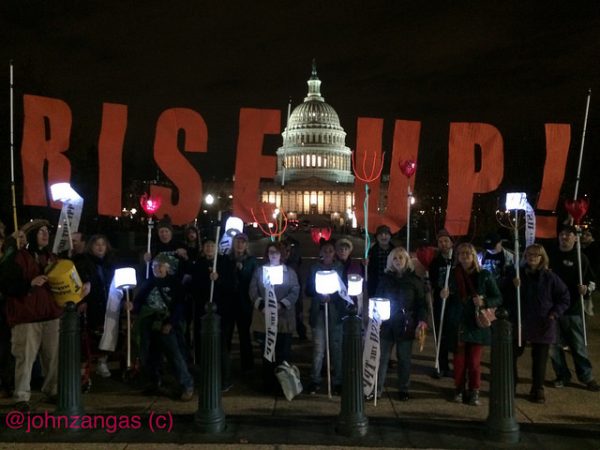 There is still time to stop USMCA. Leaders are expected to sign the deal on December 1 at the G-20 meeting. Then President Trump has 60 days to report to Congress on changes to US law that are required by the agreement. Within 105 days of the agreement being signed, the US International Trade Commission (ITC) must complete a study of the agreement’s economic impact. Congress will have to pass legislation to implement USMCA.  After Congress receives the final bill from the president, it has 90 days of being in session to act on it under Fast Track rules. It is unlikely that all this can be accomplished before the 2019 legislative session.

Now that we know more about the contents of the new NAFTA, we need to mobilize to stop its ratification and implementation by Congress. If we are to win a new model of trade that raises the bar on protection of workers, the environment and democracy, we must show, as we did with the TPP, that rigged corporate trade will be stopped by a popular movement.