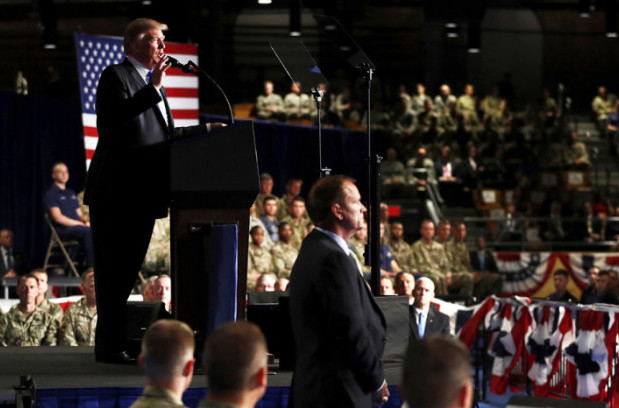 As a private citizen and presidential candidate, Donald Trump railed against the Afghan war.  A waste, he said.  Americans should withdraw, he said.  But in last night’s speech, Trump went against his own instincts (so he said) and went with the failed policies of his predecessors.  The war will continue, no timetable set, no troop levels determined, with conditions on the ground dictating America’s actions, according to the president.

What caught my attention, beyond the usual paeans of praise to America’s “warriors” and “warfighters,” was the specious reasoning to justify the continuation of the war.  Trump gave three reasons, so let’s take them one at a time:

It’s piss-poor reasoning to argue that, because a lot of people have sacrificed and died in a war, the war should continue (with more people dying) to justify those previous sacrifices.  By this logic, the more who die, the more we should keep fighting, meaning more dead, meaning more fighting, and so on.  Where is the honor and “worthy” outcome here?

Actually, the consequences of an American withdrawal are both unpredictable and (most probably) acceptable.  Sure, terrorist organizations may gain impetus from an American withdrawal.  It’s also possible that a notoriously corrupt Afghan government might finally nturegotiate with the Taliban and other organizations, and that regional power brokers like Pakistan and Iran, who have their own interests in regional stability, might broker a settlement that Americans could live with.

Trump further argued that a rapid U.S. withdrawal from Iraq in 2011 led to “hard-won gains slip[ping] back into the hands of terrorist enemies. Our soldiers watched as cities they had fought for, and bled to liberate, and won, were occupied by a terrorist group called ISIS.”  The truth is far more complex.  The prolonged U.S. occupation of Iraq helped to create ISIS in the first place, and failed American efforts to create and train reliable Iraqi security forces contributed to easy ISIS victories after U.S. forces left in 2011.

Isn’t it remarkable that, after sixteen years of sustained effort by the U.S. military, the Af-Pak region is now home to 20+ terrorist organizations?  The “highest concentration” in the world?  Is this not an admission of the utter failure of U.S. policy and actions since 2001?  How is this failure to be rectified by yet more U.S. attacks?

Trump said the new American goal is to kill terrorists.  This is not a strategy.  It’s a perpetual and deadly game of Whac-A-Mole.  That’s what Trump’s vaunted new strategy boils down to, despite the talk of economic pressure and working with Pakistan and India and other regional powers.

On Afghanistan, Trump should have listened to his instincts and withdrawn.  Instead, he listened to “his” generals.  With Trump, the generals won this round.  What they can’t win, however, is the war.