By Marianne Lavelle, www.insideclimatenews.org
April 27, 2017
| Educate!
Trump’s Climate Cuts Could Result In Half-Billion Extra Tons Of CO2 In The Air2017-04-272017-04-27https://popularresistance-uploads.s3.amazonaws.com/uploads/2017/12/popres-shorter.pngPopularResistance.Orghttps://popularresistance-uploads.s3.amazonaws.com/uploads/2017/04/DonaldTrumpcoalGettyImages-150x100.jpg200px200px

Above Photo: President Trump’s efforts to roll back existing climate change policies will have a delayed but prolonged effect, according to a new analysis. Credit: DOMINICK REUTER/AFP/Getty Images

A new analysis quantifies the ‘Trump Effect’ on U.S. greenhouse gas emissions, finding emissions begin to flatten or increase by 2020 under his policy plans.

President Donald Trump‘s planned climate change policies could lead to an extra half a billion tons of greenhouse gases in the atmosphere by 2025, according to a new analysis. That is equal to the annual electricity emissions of 60 percent of U.S. homes.

Climate Advisers, a Washington consultancy, predicts that U.S. carbon emissions, which have been falling, will begin to flatten or increase by 2020 if the Trump administration succeeds in repealing the Clean Power Plan and other Obama-era regulations.

In other words, decisions made today will have a delayed effect—but a prolonged one.

The analysis assumes that some regulations are more vulnerable than others to rollbacks. The Clean Power Plan to curb carbon emissions from power plants, methane rules covering the oil and gas industry and a handful of efficiency regulations are “highly vulnerable” in the consulting firm’s view, either because they’re high profile or because they haven’t been fully implemented. If these are the only rules the Trump administration is able to repeal, it would erase 332 million metric tons of carbon pollution cuts, Climate Advisers projected.

Although the Obama administration policies alone were not enough to get the U.S. to its goal under the Paris climate agreement, Climate Advisers said Trump’s policies would stall or increase the nation’s decline in emissions. The U.S. pledged to cut its greenhouse gas emissions 26 percent from 2005 levels by 2025, and it’s currently only a third of the way there.

The Climate Advisers report is one of several recent efforts to quantify the potential climate impact of the Trump administration’s energy and environmental policies. InsideClimate News previously compiled a chart showing how the U.S. would have virtually no chance of meeting its Paris promise under Trump, based on estimates by the Lawrence Berkeley National Laboratory of the emissions cuts achievable with each of Obama’s policies. 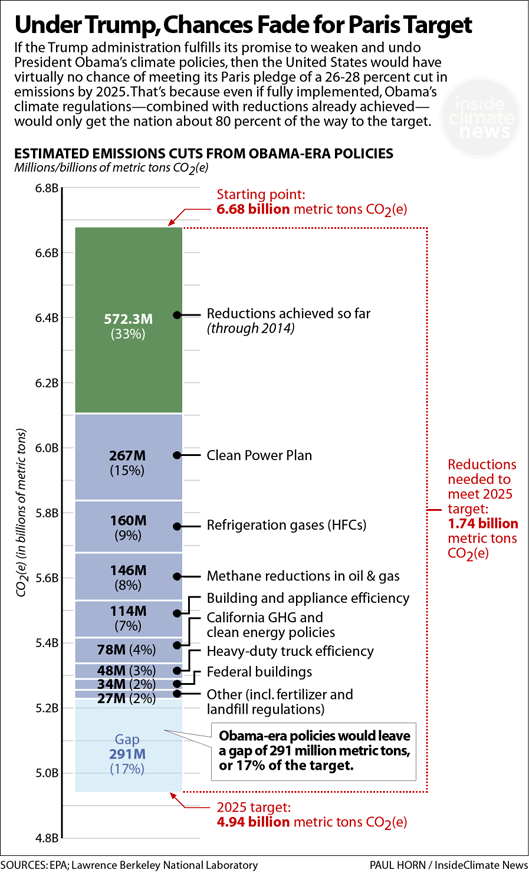 Rhodium Group, a consulting firm that focuses on global issues, looked at the policies that would be repealed under Trump’s executive order last month on energy and predicted that U.S. emissions would flatten almost immediately—not rising or falling—through 2030.

David Bookbinder, a longtime environmental lawyer and a fellow at the Niskanen Center, a libertarian think tank, has projected a larger shortfall than Climate Advisers did. He expects the U.S. will miss its Paris goal by 1 billion metric tons if Trump succeeds in undoing most of the Obama-era climate rules. (The Climate Advisers projection is about 500 million to 700 million metric tons short of the Paris target, depending on the number of rules repealed.)

The Sierra Club released a more optimistic analysis, concluding that 60 percent of the reductions needed to meet the Paris commitment could be made through action by states and local governments, as well as businesses, to replace aging coal-fired power plants with renewable energy and invest in energy efficiency. Similarly, former New York City Mayor Michael Bloomberg, a fierce advocate of climate action, has said that market forces and local leadership have set the course for U.S. Paris success, no matter what Trump does.

While Climate Advisers notes the difficulty in calculating the potential climate impact of Trump’s policies, it argues that the Paris goal is dependent on federal policies that go beyond the Obama regulations.

“Full attainment of the U.S. [Paris pledge] would rest on the ability and will of the incoming administration to pick up President Obama’s mantle and push forward additional climate measures,” the report said.