Above and below: Children wait outside an UNRWA school before attending the first day of class in Gaza City, Aug. 29, 2018. Hundreds of thousands of Palestinian children are starting their school year in Gaza amid major budget cuts that threaten to close United Nations schools. Felipe Dana | AP. 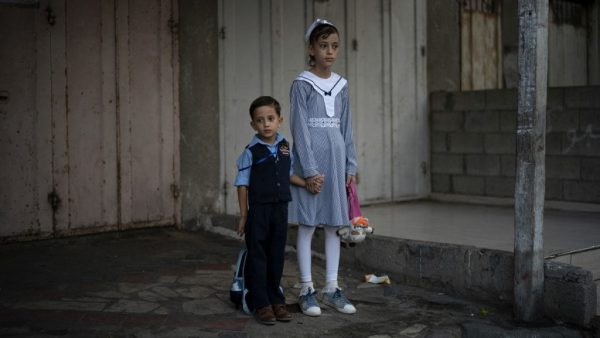 U.S. President Donald Trump’s decision to severely cut funding to the United Nations Relief and Works Agency (UNRWA) is another step in what seems to be an attempt by the U.S. and Israel to erase the Palestinian refugee issue. Festering for seven decades, the Palestinian refugee crisis has been an open wound affecting Palestine and the countries around it, and now Trump and Israeli Prime Minister Benjamin Netanyahu claim they have found a solution: deny the existence of the refugees.

However, as much as Trump and Netanyahu may try to deny they exist, and even if the U.S. government decides to “reduce” their number by declaring that there are far fewer refugees than there really are, the fact remains that over 5 million Palestinians live in camps in extreme poverty, neglect and abuse. The reason for this: Israel has banned the refugees and their descendants from returning to their land so that it could maintain a Jewish majority.

If the U.S.-Israeli “solution” goes through, as it seems it will, UNRWA will serve only the original surviving refugees, whose number naturally decreases each year. According to a report in Al-Shabaka, the Palestinian Policy Network:

A bill in Congress attempts to codify this [Trump’s] new formulation. HR 6451 stipulates that only the surviving refugees qualify for resettlement and UNRWA services. The rest of the aid would be channelled to the U.S. Agency for International Development (USAID), which is bound by the 2018 Taylor Force Act, prohibiting U.S. aid to the Palestinian Authority until certain conditions are met. The bill has been referred to the House Committee on Foreign Affairs.” 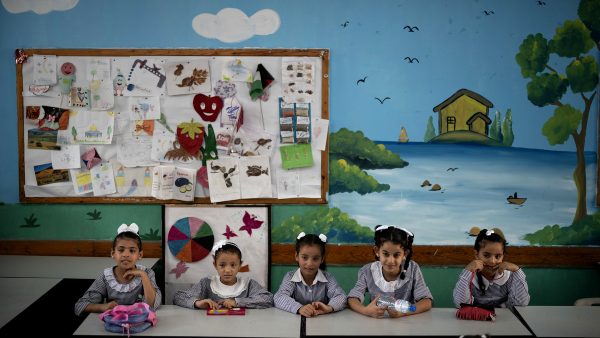 Girls sit in a UNRWA classroom during the first day of a new school year in Gaza City, Aug. 29, 2018. Felipe Dana | AP

Also according to the Al-Shabaka report: “In January 2018 the administration slashed the first $125 million installment of its annual payment to UNRWA by more than half.” Then, when  the U.S. announced that it will no longer contribute to UNRWA at all, the announcement sent “shockwaves around the Arab world.”

Clearly, Jordan, Lebanon, Syria — all countries where Palestinian refugee camps are situated, realize that the result of this will be that millions of Palestinian refugees would be left without even the little education, work, food, and healthcare they currently have. In other words, this will result in an even worse crisis, not a resolution.

One of the more puzzling aspects of this issue is that the state of Israel claims its own legitimacy derives from the right of Jewish people to “return” to their biblical homeland after 2,000 years of exile. Zionists argue that, owing to connections to an ancient tribe that resided in Palestine some 2,000 years ago, they have a claim to Palestine. Now, the same state of Israel demands that Palestinian refugees drop their claim to return after 70 years and forget their homeland.

The absurdity of the 2,000 year claim to “return” needs hardly be explained, but the fact is that not a single Jewish person can point out where his or her family lived 2,000 years ago. Palestinians however, in many if not most cases, still have the keys to their homes and the deeds to their land. Many of the first generation refugees are still alive and — when given a chance, as shown in this video, — will, even in places where a village or town was totaled by the Israelis, find the exact spot where their home stood, where the well used to be, and where the school, mosque or church stood.

A report published by the United Nations High Commissioner on Refugees (UNHCR) says that,

The humanitarian aid and assistance that UNRWA provides to the Palestine refugees can never be enough. But it will be required as long as the issues of statelessness, prolonged military occupation, economic marginalization and vulnerability characteristic of the Palestinian refugee crisis are not addressed.”

It goes on to say:

Because of the prolonged nature of the Palestine refugee problem, the [UNRWA] agency’s efforts to provide education and health care have been pivotal in developing the refugees’ full human potential. Indeed, education is the largest of UNRWA’s main programmes, accounting for approximately 54 percent of its General Fund Budget.”

Clearly, the host countries of Palestinian refugees have a good reason to be concerned now that funding has decreased so substantially. 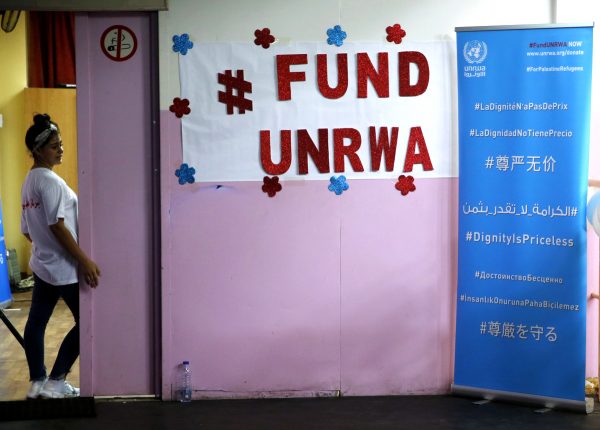 A Palestinian refugee stands near a classroom before a ceremony marking a new year at an UNRWA school in Beirut, Lebanon, Sept. 3, 2018. Hussein Malla | AP

“The U.S. support for UNRWA was not an act of generosity,” historian Ilan Pappe recently posted. Back in 1950, the U.S. supported the establishment of the agency, with a promise that its creation would lead to the implementation of Resolution 194, passed on December 11, 1948. While in the so-called peace negotiations between Israel and the Palestinian Authority the refugee issue was designated as a “final status” issue to be discussed at an unknown date in the distant future, the UN resolution predates that and therefore should be implemented without such interminable delays. Resolution 194 states that the UN:

Resolves that the refugees wishing to return to their homes and live at peace with their neighbours should be permitted to do so at the earliest practicable date, and that compensation should be paid for the property of those choosing not to return and for loss of or damage to property which, under principles of international law or in equity, should be made good by the Governments or authorities responsible;

Instructs the Conciliation Commission to facilitate the repatriation, resettlement and economic and social rehabilitation of the refugees and the payment of compensation, and to maintain close relations with the Director of the United Nations Relief for Palestine Refugees and, through him, with the appropriate organs and agencies of the United Nations …”

In his book The Ethnic Cleansing of Palestine, Pappe says the following:

UNRWA was not committed to the return of the refugees as UN General Assembly Resolution 194, from 11 December 1948, had stipulated, but was set up simply to provide employment and subsidies to the approximately one million Palestinian refugees who had ended up in the camps. It was also entrusted with building more permanent camps for them, constructing schools and opening medical centres. In other words, UNRWA was intended, in general, to look after the refugees’ daily concerns.”

Recently, Pappe stated that ““UNRWA can only be dismantled if that resolution [194] would be respected.” In other words, dismantling UNRWA is fine as long as the refugees are permitted to return to their homes and their land in Palestine, as stipulated in the resolution, and be paid reparations for seven decades of dispossession.

The Israeli government says it welcomes the U.S. decision to stop funding UNRWA. According to Israel, the UN agency — which in 1950 was tasked was caring for the Palestinian refugees that Zionist forces drove out of what was, until then, Palestine — is perpetuating the refugee problem.

Palestinian writer Ghassan Kanafani has written many short stories that reflect the lives of the Palestinian refugees in the camps. These are stories about the poverty, the humiliation and the desperation of a people who were thrown out of their land and forgotten by the world. He offers honest, heart wrenching descriptions of children “learning humiliation in the Agency schools” (Agency meaning UNRWA) and fathers who are helpless and must compromise their own integrity and dignity in order to provide for their families meager existence — and all of this because Israel has convinced the world that a “Jewish majority” is more important than humanity, people’s lives and dignity, not to mention people’s right to live free on their land.

As things stand today, the U.S. will stop funding the agency that is tasked with caring for millions of refugees — whom Israel created and is refusing to allow to return — while continuing to give Israel billions of dollars each year. Clearly, working the other way around would be more cost-effective. Stop sending Israel foreign aid, allow the refugees to return, and use the billions of dollars of foreign-aid money to facilitate their return, pay reparations, and rehabilitate the communities in Palestine that have been subjected to settler colonialism and apartheid since 1948.