WASHINGTON, DC –  I knew that President-elect Donald Trump was going to have his smiley face on at his inauguration as soon as I stepped into Baltimore’s Penn’s Station early on Friday morning, January 20, 2017.

It was packed with Trump true believers carrying all kinds of signs and wearing red baseball caps that barked: “Make American Great Again.” There were only a few anti-Trump activists in sight. 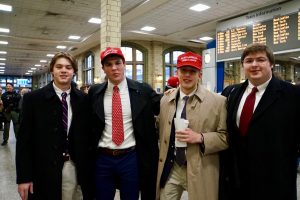 Well, the 8:30 am MARC train out of Penn Station had eight cars. I asked the conductor how many empty seats he had. He said it was only filled to “about one-third of its capacity.”Washington D.C. and federal officials were expecting close to 1,000,000 visitors for the weekend. I don’t think they even came close to making that number. The MARC line prepared for a huge turnout for the event, too, the 45th in our country’s history. It had ordered out more trains than usual for the occasion.

Earlier in the week, a Gallup Poll came out. It found that 55 percent of the Americans polled had “a negative view” of Trump even before he took the oath of office. It was an historic polling low. Most recent presidents had favorable ratings going into the office.

The last inauguration I attended was for the warmonger George W. Bush, Jr. aka “Dubya,” back in 2001. That was a very cold day with pockets of Bush-bashers on hand. This time, however, the temperature hovered around the 50 degrees mark for most of the day, with light showers interspersed. And – underscore this – there was “no problem” getting up close to view the inauguration parade at the Bush event.

About 68 members of the U.S. Congress had promised to boycott the ceremony. Maryland’s Anthony Brown (4th D.) and Jamie Raskin (8th D.) are in that group. Rep. Elijah Cummings (7th D.), however, said he would attend.

After my train arrived at Penn Station in D.C., about 9:30 am, with its splendid view of the U.S. Capitol, I walked out to Columbus Circle. A spirited anti-Trump demonstration was already in progress. There, I witnessed plenty of anti-Trump posters, signs and banners. Speakers were also blasting away via a loud audio system. 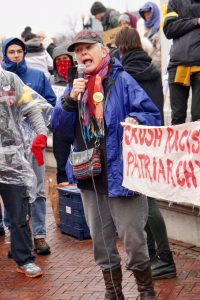 I starting walking towards the ANSWER rally by heading out in a westerly direction on “D” Street. No cars were allowed on it. Every side street was blocked with either barriers, huge buses and/or dump trucks. There were cops and security types all over the place.I was told by one of the activists that on Pennsylvania Avenue, at 7th Street, the ANSWER Coalition, a national social justice advocacy group, had erected a 28-foot stage. There, they would be hosting speakers representing a wide array of grassroots issues to share their views.The area is known as the “Navy Memorial Plaza.”

As I continued my journey, along with others, I was confronted by “Jesus” types hawking Biblical messages of doom. (Maybe, they know something that I don’t. Scary though!)

On my left, as I passed along, were entrances to the National Mall and to the Inauguration grounds: They were marked Orange, Blue and Red. However, you needed an “official” ticket to get into the Mall and also to check out the parade on Pennsylvania Avenue. A fellow on the train from Ohio had told me: “I got a ticket from my congressman.” Well, good for him.

I passed some social justice activists on the way. They had a banner up. When one of their speakers, Margaret Flowers, was addressing the crowd, a dork-headed Trump supporter got in her face. Fortunately, Flowers’ colleague, Kevin Zeese was nearby and gave the interloper a piece of his mind. The irate Trump zealot soon backed off. 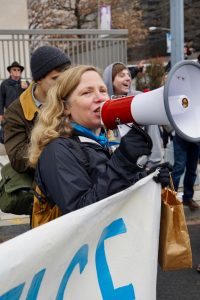 I gave up and went back to hang out at Penn Station with the anti-Trump protesters.At 7th Street, there was a line for the public who didn’t have a ticket, waiting to gain entrance. It went back at least three blocks and was about 30 people wide. I waited for over 45 minutes and the line barely moved inches. I drank one decaf coffee waiting. The Secret Service was in charge of security at this gate/entry point. I decided this was “a fake entrance!”

Oh, by the way, last night, near northwest D.C. in Maryland, according to “USA Today,” a large group of LGBT activists hosted a “Queer Dance Party” outside the rented home of VP Mike Pence. The VP is a born-again Evangelical, although he was raised as a Roman Catholic. It all, mercifully, ended peacefully.

I was told that Trump was sworn in about noon, in front of the Capitol, by Chief Justice John Roberts of the SCOTUS. So, as Shakespeare would write, in the play Macbeth, “the deed is done.”

Finally, the only thing I know for sure is this: The next four years will give new meaning to the word – surrealism.