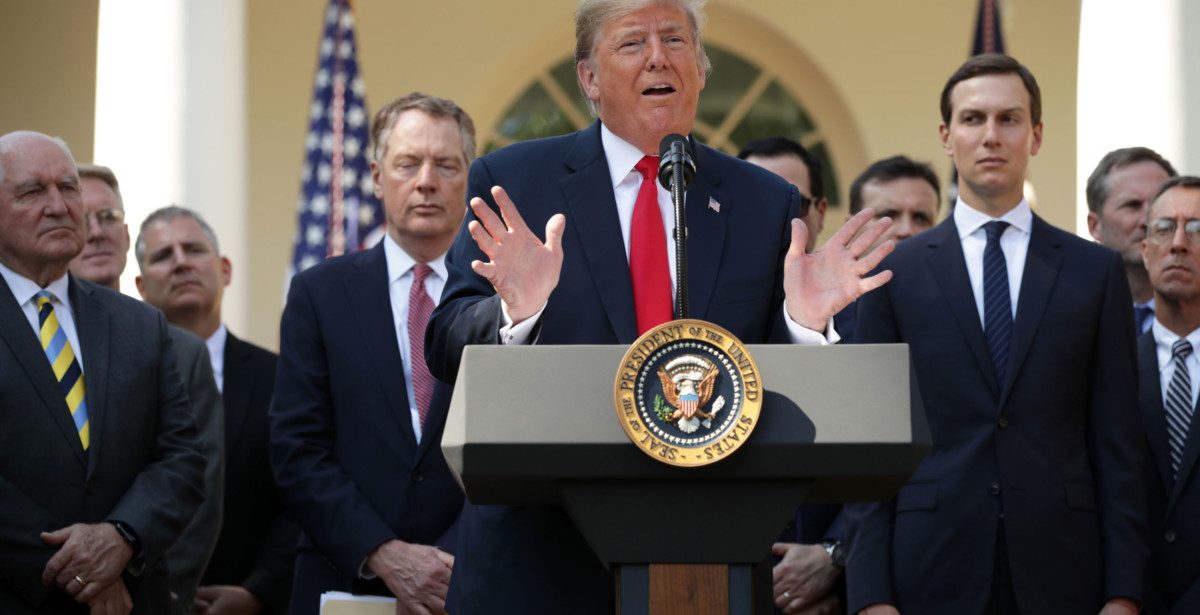 Above Photo: President Trump speaks during a press conference to discuss a revised US trade agreement with Mexico and Canada in the Rose Garden of the White House on October 1, 2018, in Washington, DC.CHIP SOMODEVILLA / GETTY IMAGES

On the campaign trail, Donald Trump set himself apart from fellow Republicans and even Hillary Clinton by advancing a protectionist trade agenda and promising to renegotiate or scrap the 1994 North American Free Trade Agreement between the United States, Canada and Mexico. So, the president celebrated on Monday after last-minute negotiations with Canada advanced a new version of NAFTA.

“It’s an amazing deal for a lot of people,” Trump said during an address at the White House.

However, critics say the current draft of the $1.2 trillion deal would not completely halt the outsourcing of US jobs to Mexico, and it imperils one of Trump’s other campaign promises: reducing the price of prescription drugs for US consumers.

The draft of the deal, known as the United States-Mexico-Canada Agreement (USMCA), includes updates to reflect advances in digital technology and changes meant to address NAFTA’s most controversial impacts in the US, namely the outsourcing of domestic manufacturing jobs in the automobile sector. And while the proposed agreement includes some new limits on corporate power that progressives have demanded for years, unions have been reluctant to throw their support behind the current draft of the deal.

“The bottom line is that we simply do not have enough information at this time to know whether NAFTA 2018 is in the economic interests of the United States,” said AFL-CIO Trade Policy Specialist Celeste Drake in a statement, shortly after the USMCA was released on Monday.

Congress still has to vote on the deal, and environmental and public health groups are already demanding lawmakers reject the new NAFTA altogether.

“The Trump administration released the text of the U.S.-Mexico-Canada Agreement trade deal that would enshrine and globalize Trump’s deregulatory zealotry into a trade pact that would outlast the administration and imperil future efforts to protect consumers, workers and the environment,” said Wenonah Hauter, executive director of Food and Water Watch, in a statement.

The Trump administration is eagerly rolling back environmental regulations and encouraging greater fossil fuel production while Mexico denationalizes its oil industry and Canada works to increase energy exports, so it’s no surprise the new NAFTA has angered environmentalists. In fact, there is not a single mention of climate change anywhere in the working draft, which would weaken international environmental standards, according to an analysis by the Sierra Club.

Raising the Cost of Biologic Drugs

Trump, of course, did not campaign on climate or environmental protection. However, throughout his campaign and presidency, he has repeatedly promised to lower prescription drug prices for US consumers, even accusing drug makers of “getting away with murder.”

Trump tapped a former pharmaceutical executive to tackle the problem and has publicly pressured drug makers to lower their prices. Yet a recent investigation by the Associated Press found that for every drug that saw a price drop since Trump took office, the price of 96 drugs has increased.

Peter Maybarduk, director of the Access to Medicines Program at Public Citizen, said the new NAFTA contains intellectual property protections for pharmaceutical companies that go “significantly beyond” the original deal. These protections, he said, would further insulate US-based drug manufacturers from generic competition and drive up the price of medicine at home and abroad.

“The revised rules would further strain health care budgets, contribute to people’s suffering and family financial hardship, and most likely cost people their lives,” Maybarduk said in a statement on Monday.

A rule buried in the agreement would give pharmaceutical companies at minimum 10 years of market exclusivity for biologic drugs, which are among the most important and expensive new medical technologies. Biologics are made from the cells of living organisms and microorganisms — think vaccines or genetically modified human hormones — and change the way the body works at the cellular level, revolutionizing the treatment of ailments varying from cancer to arthritis.

Many biologic drug makers are based in the US, and Trump claims that the USMCA’s intellectual property protections would protect profits and ensure the drugs are produced domestically.

“We want our drugs to be made here,” Trump said on Monday. “When you talk prescription drugs, we don’t like getting them from foreign countries. We don’t know what’s happening with those drugs, how they’re being made.”

However, Maybarduk said the USMCA essentially gives drug makers a government-sponsored monopoly on new drugs, and the 10-year patent rule is the “worst” of its kind to appear in a trade deal negotiated by the US. With this patent exclusivity, drug makers can keep the price of biologics sky high for a decade before facing any market competition from generic versions produced in countries outside the trade bloc.

“Canada and Mexico should be embarrassed — perhaps even ashamed — for agreeing to such terms,” Maybarduk said. “At least as regards their own peoples’ access to medicines and health, Mexico and Canada have failed to stand up to North America’s neighborhood bully.”

The new NAFTA also grants marketing exclusivity for new uses and forms of medicines that already exist on the market. This means pharmaceutical companies can enjoy monopolies on drugs that have existed for years by developing new ways to use or administer them. For example, patents on insulin products have sent health care prices for diabetics through the roof, even though insulin has been around for decades.

Similar intellectual property protections for pharmaceutical companies and other corporations helped make the Trans-Pacific Partnership deeply unpopular among US voters, and the Obama administration was unable to push the major deal through Congress back in 2016.

“Rather than learning from the mistakes of prior trade rules that have increased the price of medicines in developing countries and that made the Trans-Pacific Partnership so deeply unpopular, NAFTA 2018 incorporates nearly wholesale the wish list of big pharmaceutical companies, with respect to intellectual property rights and drug pricing provisions,” Drake said.

The New NAFTA Is Not Done Yet

Trump is betting that voters will focus on the new NAFTA’s protections for American manufacturing workers rather than the fine print. The deal would require more auto parts to be manufactured in the trade region in order to avoid taxes, and more auto workers to be paid a living wage of at least $16 an hour.

According to the Trump administration, these policies are meant to reduce incentives to outsource jobs to cheaper plants in Mexico and encourage Mexican lawmakers to pass much-needed labor reforms. However, progressives remain concerned that measures intended to raise labor and environmental standards in Mexico are non-binding, and American manufacturers will still seek out low-wage workers and loose environmental laws south of the border.

“More work remains to be done,” said Lori Wallach, a progressive trade expert and director of Public Citizen’s Global Trade Watch. “Unless there are strong labor and environmental standards that are subject to swift and certain enforcement, US firms will continue to outsource jobs to pay Mexican workers poverty wages, dump toxins and bring their products back here for sale.”

USMCA is expected to undergo more changes before late November, when Trump and his counterparts hope to sign the deal before Mexico’s sitting president leaves office. In statements released Monday, various unions and labor groups said they were committed to working with the administration to improve the draft text as Congress debates the agreement.

“It is vital to understand that this debate is not about free trade, protectionism or ivory-tower academic arguments,” said United Steelworkers International President Leo W. Gerard, in a statement. “It is about what will happen to real people. NAFTA’s long-term impact has been devastating, and reforms are sorely needed.”