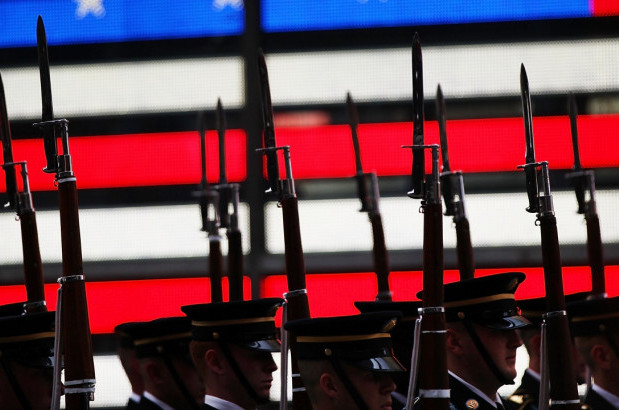 THE U.S. GOVERNMENT already spends $600 billion dollars a year on its military — more money than the next seven biggest spenders combined, including China and Russia.

On Monday, the White House said it would request $54 billion more in military spending for next year. That increase alone is roughly the size of the entire annual military budget of the United Kingdom, the fifth-largest spending country, and it’s more than 80 percent of Russia’s entire military budget in 2015.

If Congress were to follow Trump’s blueprint, the U.S. military budget could account for nearly 40 percent of global military spending next year. The U.S. would be outspending Russia by a margin of greater than 9 to 1.

At a meeting of U.S. governors on Monday, Trump described his forthcoming budget proposal as “a public safety and national security budget.”

U.S. military spending has been at permanent wartime levels since the 2001 terror attacks, despite the significant drawdowns in Afghanistan and Iraq under President Obama. Spending has declined since the wars were at their peak in 2010, but U.S. military spending in 2015 remains at 190 percent of what it was before 9/11, according to data from the Stockholm International Peace Research Institute, or SIPRI, a leading tracker of weapons and defense spending.

Throughout his campaign, Trump criticized bloated weapons contracts and the overall cost of wars in the Middle East. But he also promised to make the military “strong again,” pledging to build 70 new warships and increase the number of troops in the Army to the same high levels as during the wars in Afghanistan and Iraq.

Trump has also called for the U.S. to “greatly expand” its nuclear weapons capabilities, signaling a potential willingness to expand a $1 trillion modernization effort Obama started that was already widely criticized by budget critics as unaffordable.

The White House did not elaborate on how the Pentagon would spend the extra money. CNN reported that the White House was planning dramatic cuts to the EPA and foreign aid budgets. Both are tiny components of the federal budget and are unlikely to add up to anywhere near $54 billion.