By Whitney Webb, Mintpressnews.com
November 5, 2018
| Educate!
Trump’s Rules Of Engagement For Troops At US-Mexico Border Mirror Those Used By The IDF In Gaza2018-11-052018-11-05https://popularresistance-uploads.s3.amazonaws.com/uploads/2017/12/popres-shorter.pngPopularResistance.Orghttps://popularresistance-uploads.s3.amazonaws.com/uploads/2018/11/national-guard-patrolling-at-the-us-mexico-border-e1522876595460_edited.jpg200px200px

Above Photo: A National Guard soldier glasses the US border with Mexico. Josh Lott | Reuters

The intent behind Trump’s new rules of engagement and considerable militarization of the U.S. border appears to be greenlighting the U.S. military to function as an IDF-style military police force whenever the next “threat” emerges, whether it be “foreign invaders” or “internal enemies.”

WASHINGTON  — Since President Donald Trump first directed the outrage of his supporters at a Central American migrant caravan making its way towards the United States a little over a week ago, his plan to deploy between 5,200 and 15,000 active-duty U.S. soldiers to the border has provoked mixed reactions within the United States. However, Trump’s more recent announcement that armed U.S. soldiers have been instructed to target any migrants who resort to throwing stones as though they were firing rifles has evoked an even wider range of reactions.

On Thursday afternoon, Trump detailed in a speech that “Anybody [in the caravan] throwing stones, rocks, like they did to Mexico and the Mexican military, Mexican police, where they badly hurt police and soldiers of Mexico, we will consider that a firearm.” He then elaborated that “we will consider it [stone throwing], the maximum that we can consider that…We’re not going to put up with that. They want to throw rocks at our military, our military fights back….I told them to consider it a rifle.”

Though some Mexican law enforcement officers were injured by stone throwers during their efforts to use a show of military and police force to pressure the caravan from advancing, there were no fatalities or severe injuries incurred by the Mexican authorities.

Trump’s announcement caused considerable outrage within the U.S. media and among some U.S. veterans, with some calling these new rules of engagement a war crime in the making. However, it has long been the standard in countries like Israel, where the Israel Defense Forces (IDF) have used stone throwing as the pretext to disperse “riots” as well as peaceful protests with live ammunition.

On whether the military at southern border might fire on migrants, Pres Trump says “I hope not.”

“I hope there won’t be that, but I will tell you this – anybody throwing rocks… we will consider that a firearm, because there’s not much difference.” https://t.co/fyk1ncmiwj pic.twitter.com/OGbFHFhB3A

Nowhere has this been more true than in the IDF’s response to the Great Return March in Gaza, which began in March of this year. The protests — aimed at pressuring Israel to end its decade-long blockade of the Palestinian enclave and allow Palestinian refugees to return to their homeland — have been met with a brutal show of force from the IDF even though all protesters have been unarmed. At least 210 unarmed Palestinians have been killed since the regular protests began and over 22,000 have been injured, many of them shot by IDF soldiers.

Many of those shot and killed by the IDF in Gaza were not engaged in stone throwing. while others were not even protesters, but instead medics, journalists, and even children. In contrast, only one IDF soldier has been killed during the nearly eight months of the Great Return March.

In most cases, the IDF has justified its actions by stating that it acts to prevent breaches of the border fence that would violate its sovereignty, and to protect Israeli civilians living near the border. The IDF has also likened the protests to “terror activities under the guise of popular protests involving women, children and adults.” Israeli Prime Minister Benjamin Netanyahu has defended the IDF’s rules of engagement in Gaza, stating that Israel, and any country for that matter, has to “protect [its] border against people who say ‘We’re going to destroy you, and we’re going to flood into your country.’”

The tone of Netanyahu’s rhetoric has made little or no distinction between Gazans and African immigrants, with the Israeli leader having called both “illegal infiltrators” that threaten Israel’s status as a Jewish ethnostate. Such remarks are similar to those voiced by Trump, who warned earlier this year that illegal immigrants from Central America sought to “pour into and infest our country.”

The Trump administration has notably been supportive of the IDF’s harsh response to the Gaza protests. Trump’s ambassador to Israel and former personal lawyer, David Friedman, called the use of force by the IDF “absolutely appropriate.” He also stated that Gaza protesters were “enemies bent on murdering your citizens” and thus should not be allowed “to have free access to cross the border.”

Even before the Great Return March began this year, Israeli forces have long responded with live ammunition to Gazans allegedly throwing stones. For instance, last year, the IDF shot several Gazans – killing one – for throwing stones near the border and allegedly seeking to “damage” the fence between Israel and Gaza.

The same has long been true in the occupied West Bank. Less than two weeks ago on October 24, Israeli soldiers shot and killed 21-year-old Mohammed Bsharat in the West Bank village of Tamoun for allegedly throwing stones in response to an IDF raid searching for “illegal weapons.” Five other Palestinians were also shot but did not die from their injuries. Earlier this year, in June, 21-year-old Izzideen Tamimi, a relative of Palestinian resistance icon Ahed Tamimi, was shot and killed by IDF soldiers conducting a late night raid for striking a soldier in the head with a stone. 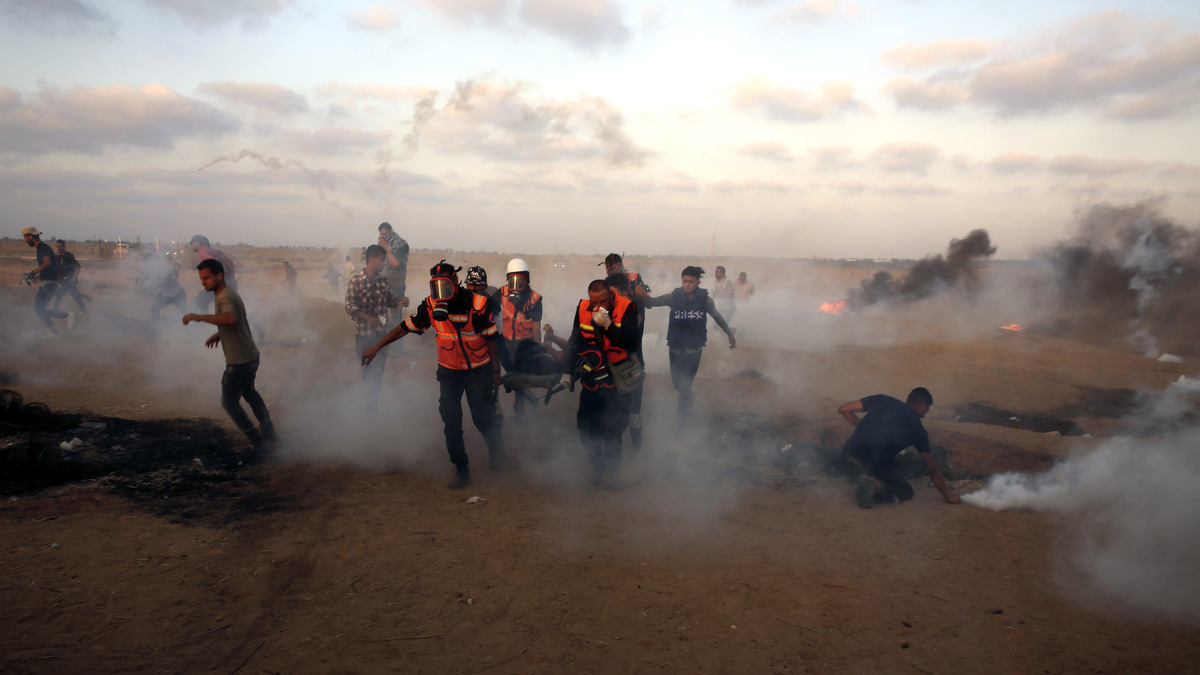 Medics evacuate a wounded boy while others run to cover from Israeli troops near the Gaza border with Israel, Aug. 24, 2018. Adel Hana | AP

These recent incidents were preceded by numerous similar incidents, such as when IDF soldiers shot and killed a 20-year-old Palestinian in 2014 for allegedly throwing stones near Ramallah. However, his family maintained that he had been tending to the family’s goat herd near their home, a fact supported by the absence of any evidence of clashes in the area where the shooting occurred.

In addition, even “suspected” stone throwers have been targeted with live ammunition by Israeli military personnel, such as when IDF soldiers shot into a vehicle of Palestinian teenagers in the West Bank in 2016 after the IDF mistakenly identified the inhabitants of the vehicle as having thrown stones at a group of Israelis a few hours prior. The firing into a vehicle that the IDF later admitted carried “uninvolved bystanders” resulted in the death of 15-year-old Mahmoud Rafat Badran and wounded four of his teenage cousins.

It is these long-standing rules of engagement — whereby the Israeli military treats Palestinians “armed” with stones as if they were carrying firearms — that Trump has aped in setting out rules of engagement for the U.S. troops confronting Central Americans migrants and asylum seekers planning to cross the U.S.-Mexico border.

More importantly, with the U.S. establishing such IDF-style rules of engagement against unarmed individuals, several consequences are likely to result. First, it will further legitimize Israel’s brutal repression of protests in the occupied West Bank and Gaza. Second, allowing U.S. soldiers to shoot at unarmed civilians sets a dangerous precedent for future government responses to domestic unrest, both at the border and within the country, as well as advancing the disturbing trend whereby the line between the military and domestic police force has been increasingly blurred. Third, as in Gaza, many desperate and helpless people are likely to die.

Given that the U.S. government is well aware that the migrant caravan poses little threat and that most of its members are unlikely to even make it to the U.S. border, a dangerous motive behind Trump’s new rules of engagement and considerable militarization of the U.S. border appears to be the greenlighting the U.S. military to function as an IDF-style military police force whenever the next “threat” emerges, whether it be “foreign invaders” or “internal enemies.”