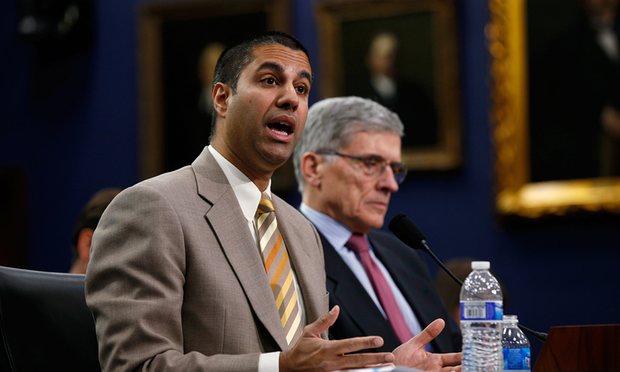 Forget Trump’s tweets and media bans. The real issue is his threat to the internet

In one of the most jaw-dropping press conferences of all time, this month President Trump declared war on the entire news media, except Fox News and Alex Jones of InfoWars. Last week he doubled down with his speech at the Conservative Political Action Conference, on the same day that the Guardian, New York Times, BBC and CNN were among news organisations barred from a press briefing.

All of this is occurring at a time of unprecedented financial pressure on the news media. For newspapers and magazines, both advertising and readership are shifting rapidly from print to the internet. Print advertising and circulation revenues are declining sharply.

When the Washington Post and New York Times, among others, faced off against the Nixon administration over the secret bombing of Cambodia, the Pentagon papers and then Watergate, they were enormously profitable, secure companies. So were Time, Newsweek, and other news magazines; and so, despite their dependence on regulation by the Federal Communications Commission, were the three television networks.

That world is gone. Newsrooms are being downsized, starting with investigative journalism, the most expensive kind of reporting. The Washington Post has sold itself to Amazon. The Los Angeles Times and Chicago Tribune are basically bankrupt. None of the major television networks or cable channels are independent any more, and most of them are under increasing financial pressure.

Against this backdrop, however alarming Trump’s attacks on the media are, they are less significant than other actions that, paradoxically, have received far less media coverage – but that present a very real threat to journalism and freedom of speech in America.

Donald Trump lost no time installing Ajit Pai as the new chairman of the FCC, which regulates broadcast and internet media. Pai has stated that he opposes net neutrality, the principle whereby service providers and regulators treat all data the same. Since his appointment Pai declined to say whether he will enforce existing neutrality rules, but if these rules are overturned then the small number of companies that dominate US internet access will be permitted to promote content of their choosing, placing other content and its providers at a disadvantage.

Pai has reversed a recent FCC decision that would have opened the provision of cable set-top boxes to competition. The move allows cable companies to retain control of not only set-top boxes, but also the software and programming content passing through them. This of course runs counter to Trump’s avowed principle of helping the little guy, etc – but that is no longer a surprise. Pai also blocked a programme designed to provide internet access to rural and low-income households.

There is potentially far more. The FCC holds sway over all telecommunications. As the newspaper and magazine industries convert to digital formats, they become dependent on services subject to FCC regulation. Given Trump’s personality, track record and various statements, it does not seem insane to worry that he might try to use the FCC to exert political pressure on the news media. It has been tried before, notably by Richard Nixon, when he was trying to persecute enemies and suppress the scandals of Watergate.

But the relaxation of oversight with regard to concentration of the media industry – mirroring other sectors, including banking, though receiving far less attention – is even more worrying. The FCC and the justice department both oversee competition, or antitrust, policy for telecommunications. And both have been asleep at the switch for years. The internet-access industry has become a tight oligopoly, which keeps the price and speed of US internet access far behind those of other industrial nations.

Even this isn’t the worst of it. The large internet providers are now acquiring the media properties for which, increasingly, their services are essential. Amazon has bought the Washington Post. Verizon is buying Yahoo and has already purchased AOL, the owner of the Huffington Post. AT&T is buying Time Warner, which owns CNN and HBO among other channels. A large portion of the news media will soon be owned by enormous companies with very strong special interests of their own.

Antitrust policy was already in bad shape under Barack Obama; now it’s going to get much worse. Trump singles out Fox News for praise at the same time that the sale of its largest rival, Time Warner, is under antitrust review at the justice department. That would be the same justice department where Trump recently fired the acting attorney general for refusing to enforce his orders, on the grounds that those orders were illegal – a position subsequently upheld by the courts. It’s not hard to imagine what might happen to anyone who gets it into their head to stick up for market competition or media independence.

All is not lost, of course. Much of the news media is feisty in covering the Trump administration, and independent voices remain plentiful. But kleptocracies and dictatorships don’t usually appear overnight; they creep up on you gradually. And this would definitely be one of those times to start looking over your shoulder, early and often.