Above Photo: A Jefferson City, Mo., police officer gives Truthdig correspondent Michael Nigro his third and final warning to stay off the street. Moments later, Nigro was arrested while documenting protesters sitting in the street in front of the Chamber of Commerce building. (Michael Nigro / Truthdig)

In its fifth week of action, the Poor People’s Campaign is demonstrating in more than 30 cities under the theme “Everybody’s Got the Right to Live: Education, Living Wages, Jobs, Income, Housing.” In previous weeks, the movement has focused on a range of issues, including gun violence, climate change and low wages. As it nears the end of its planned 40 days of action, the group of activists is still going strong across the nation, where Truthdig photojournalist Michael Nigro, supported by our readers, has followed them to document the campaign.

You can browse through Truthdig’s past coverage of the Poor People’s Campaign and consider making a donation today to help us keep up the important work of documenting activism across the nation at this historic time.

Tune in below as Nigro sends multimedia dispatches from Jefferson City, Mo., and we update the live blog with the latest news about the movement.

1:31 p.m. PDT: Truthdig correspondent Michael Nigro has been released from Cole County Jail after being arrested while livestreaming a protest in Jefferson City, Mo. The charge was “failure to obey orders,” but Nigro believes he was targeted for “journalism.”

12:54 p.m. PDT: Justice has become an endangered species in America. The Poor People’s Campaign is working to prevent justice from becoming extinct. Will more people join the movement?

“We have to remember we’re launching a movement, not ending a movement,” says the Rev. William Barber, the co-founder and co-chair of the Poor People’s Campaign. “This is a launch.”

As #PoorPeoplesCampaign arrestees are taken away. These are the steps of the US Supreme Court. Where can the people find justice in America? pic.twitter.com/MjlvjNuCub

Police giving warnings to disperse but we have our minds set on freedom. Beautiful!#PoorPeoplesCamapaign pic.twitter.com/du79cbTBfh

11:07 a.m. PDT: The Jefferson City police arrested Truthdig correspondent Michael Nigro. The police gave him three warnings to not be in the street documenting the protest. After the third warning, Nigro had one foot off the curb while recording police making arrests of people sitting in the street in front of the Chamber of Commerce building. And then Nigro became one of the arrestees.

The @jeffcitypolice have arrested @Nigrotime who was in Missouri covering the #PoorPeoplesCampaign direct action for @Truthdig #FightFor15 pic.twitter.com/zeiOF81xHR

10:53 a.m. PDT: Jefferson City police just arrested Truthdig correspondent Michael Nigro while he was livestreaming the protest in front of the Chamber of Commerce. He did not resist. They confiscated his photo and video equipment as evidence. 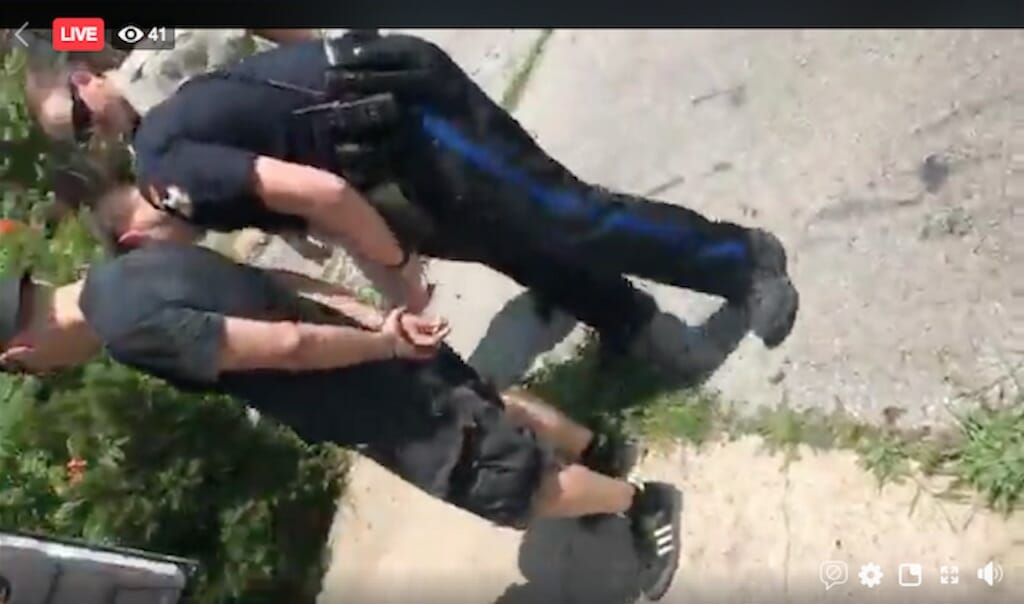 10:50 a.m. PDT: Protesters have taken to the street in the front of the Chamber of Commerce building in Jefferson City. They are blocking the street by sitting there and risk being arrested. 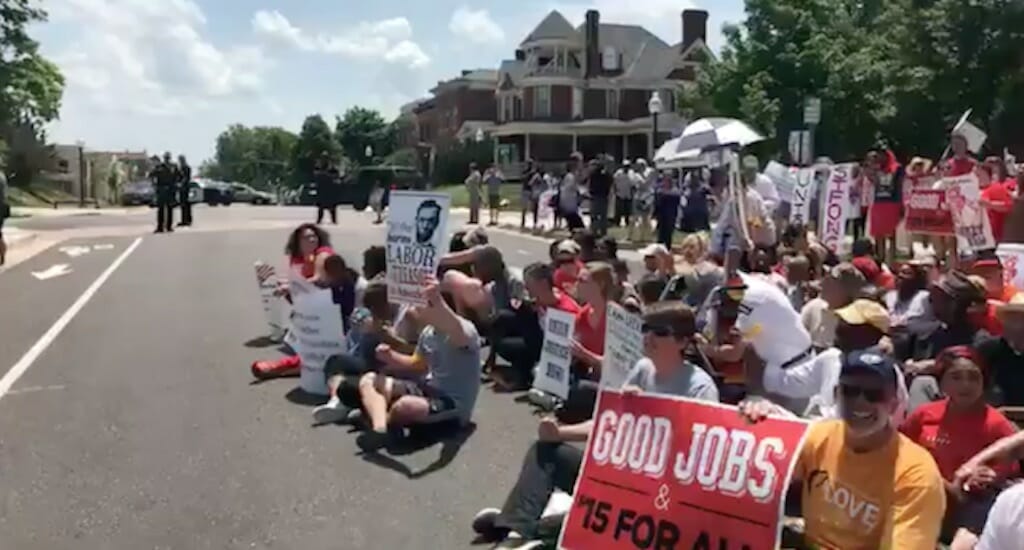 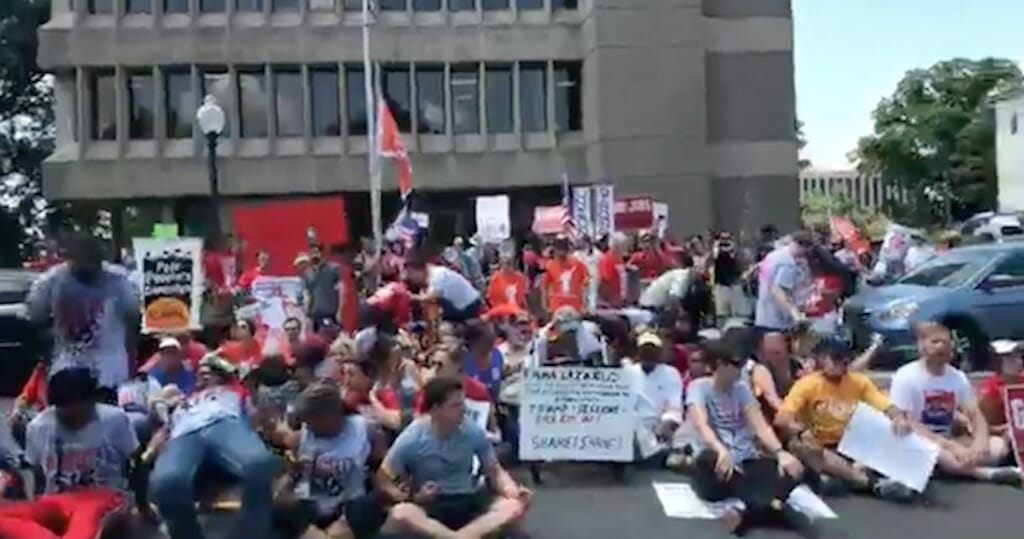 10:48 a.m. PDT: The marchers have arrived at the Missouri Chamber of Commerce and are chanting: 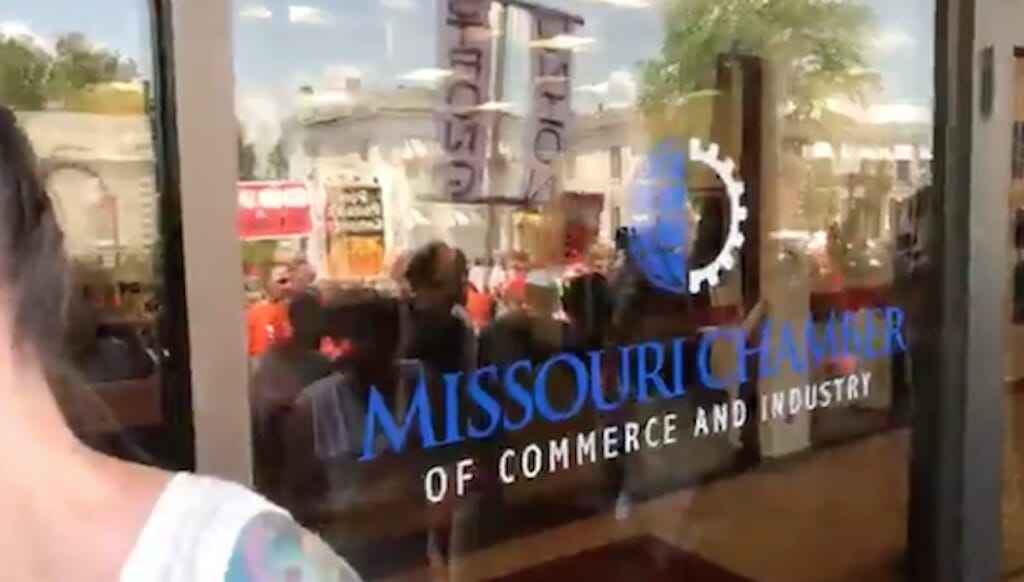 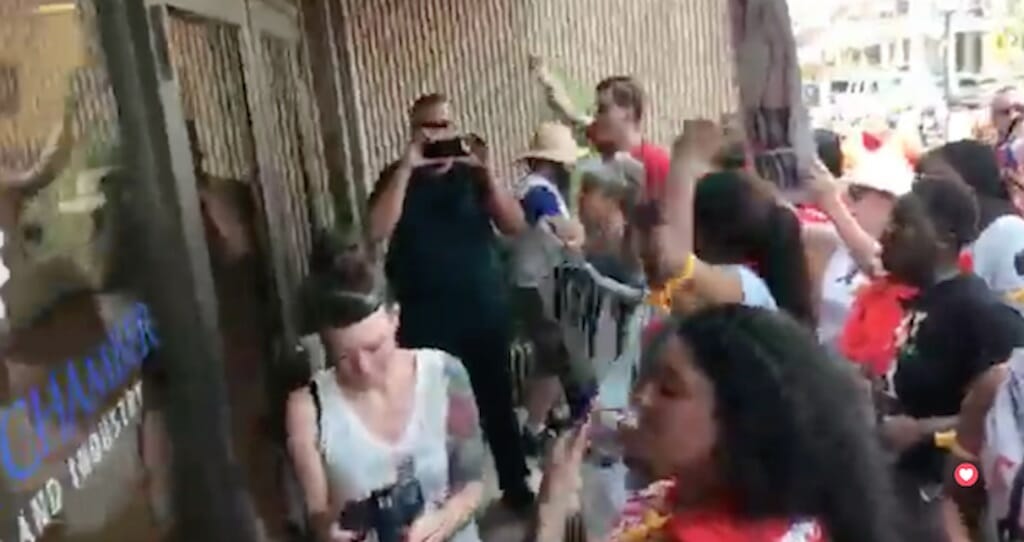 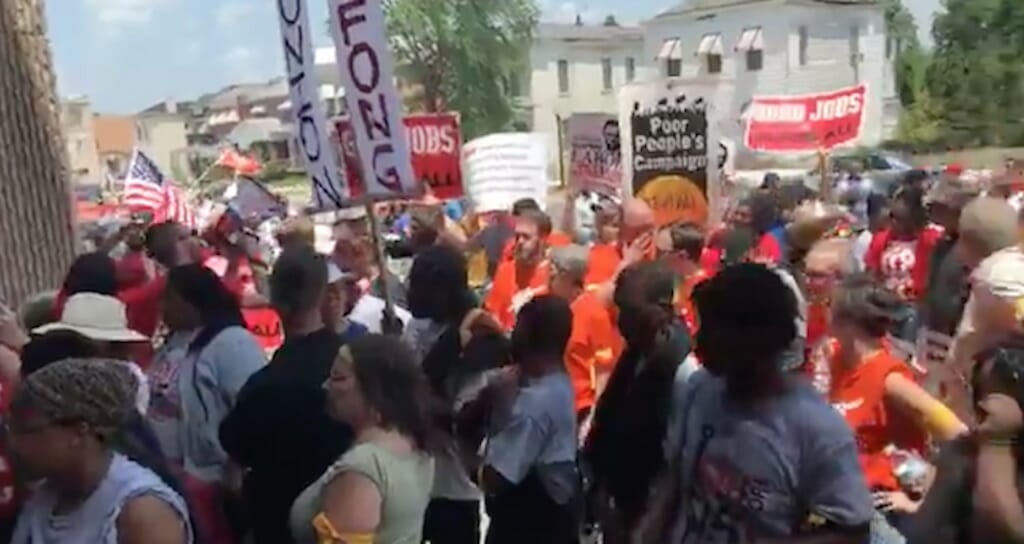 10:31 a.m. PDT: The speaking program of the Jefferson City protest ends, and Poor People’s Campaign activists begin the civil disobedience portion of the day’s action as they march away from the Capitol building.

“Are y’all ready?” a man asks the marchers.

Those with gold armbands (those who have gone through civil disobedience training) are in the front of the marching line.

10:27 a.m. PDT: Terrance Wise, who has become a voice and face of Poor People’s Campaign, explains the power of protest to effect change in America.

“Women’s rights, civil rights, labor rights. It’s all been done on the backs of people marching the streets,” Wise tells Truthdig correspondent Michael Nigro. “Change happens through protest. It started with the Boston Tea Party and continues today. We need to take our power from the streets to the ballot box.” 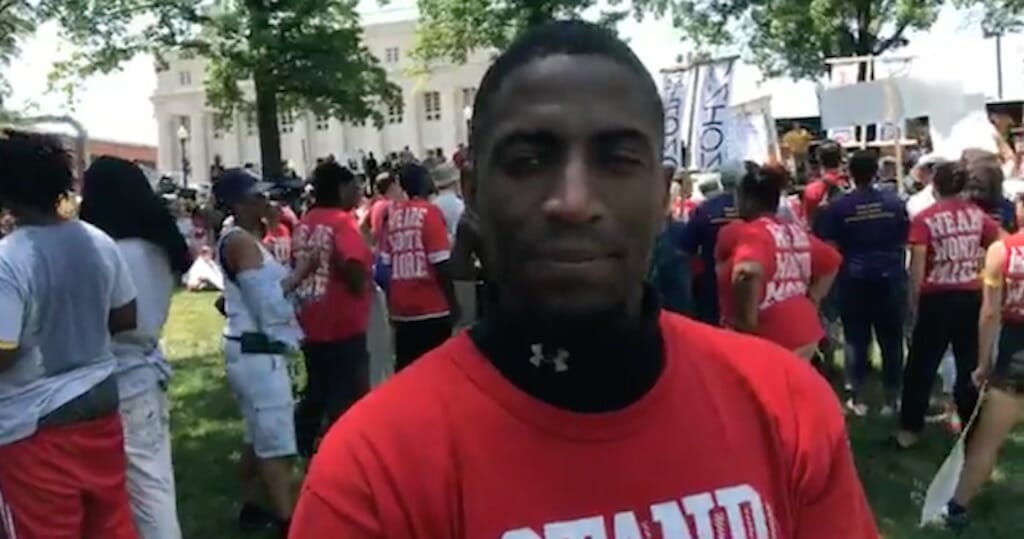 10:24 a.m. PDT: Mainstream media is not covering the Poor People’s Campaign protest in Jefferson City. Truthdig correspondent Nigro says he has seen no local media affiliates or national outlets on the ground.10:17 a.m. PDT: There are 40 million low-wage workers in America and 140 million who are impoverished.

According to an MIT study, to support a child in America a worker needs to make at least $28 an hour. A woman named Fran Marion who works in the fast-food industry tells Michael Nigro that she works two jobs and makes $10.75 an hour.

“Take us seriously,” Marion says of corporate America and the status quo establishment, “or we are going to keep coming out here until you do.” 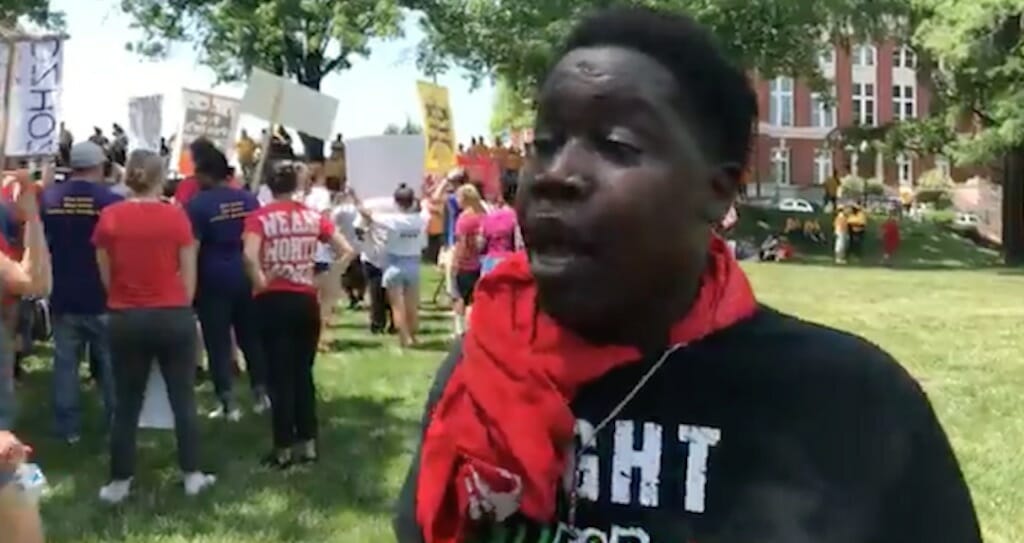 (America never was America to me.)

Let America be the dream the dreamers dreamed—
Let it be that great strong land of love
Where never kings connive nor tyrants scheme
That any man be crushed by one above.

(It never was America to me.)

O, let my land be a land where Liberty
Is crowned with no false patriotic wreath,
But opportunity is real, and life is free,
Equality is in the air we breathe.

The poem was first published in Esquire and in the International Worker Order pamphlet “A New Song” in 1938.

10:04 a.m. PDT: Optimism reigns supreme in the Poor People’s Campaign. “I believe that we will win,” says a protester in Jefferson City, Mo. “I know what we will win.”9:59 a.m. PDT: Has anyone seen George Bailey? According to Michael Nigro, Jefferson City, Mo., or “The Jeff,” has been called “the best small town in America” by travel books and reminds him of Bedford Falls from “It’s a Wonderful Life.” Remember the words of Clarence from the classic Frank Capra film: “No man is a failure who has friends.” The Poor People’s Campaign has a lot of success stories as the campaign looks to build a strong foundation (roots) from the bottom up to grow into a movement that can change America.9:57 a.m. PDT: The protesters have stopped in front of the Missouri Capitol to kick off the speaking portion of the protest. The focus, a rabbi explains, is on love and compassion.

Love for the workers. The ones who courageously share their stories.

Love for those who have lost their lives in the struggle.

Love for immigrants, Dreamers and the undocumented.

We come together in love. All colors and creeds. 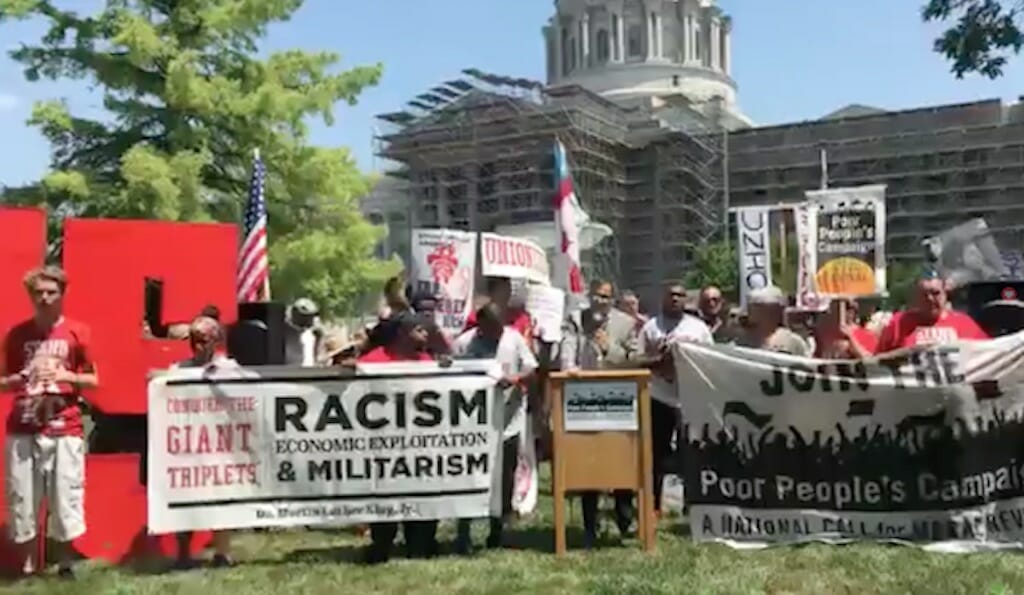 9:54 a.m. PDT: Marchers have started a chant as they walk toward the Missouri Capitol building: Hey, hey, ho, ho. The poverty wages have got to go.

9:49 a.m. PDT: About 450 people are participating in Monday’s protest in Jefferson City, Mo.

Since the Poor People’s Campaign started on May 14, there have been 1,100 arrests. That number will increase. Jefferson City police have made their first two arrests of the day. The women did not expect to be arrested. Because they were not wearing a yellow arm band, they did not plan to participate in civil acts of disobedience. Both women had confused looks on their faces as police officers handcuffed them.

About 100 people went through civil disobedience training before the protest in Jefferson City, and they are wearing yellow arm bands. They are prepared to be arrested.

9:48 a.m. PDT: A Jefferson City police officer just warned Truthdig correspondent Michael Nigro that he will be arrested if the officer sees him in the street again.

9:45 a.m. PDT: Truthdig correspondent Michael Nigro has begun his livestream in Jefferson City, Mo. You can watch below or follow on Truthdig’s Facebook page.