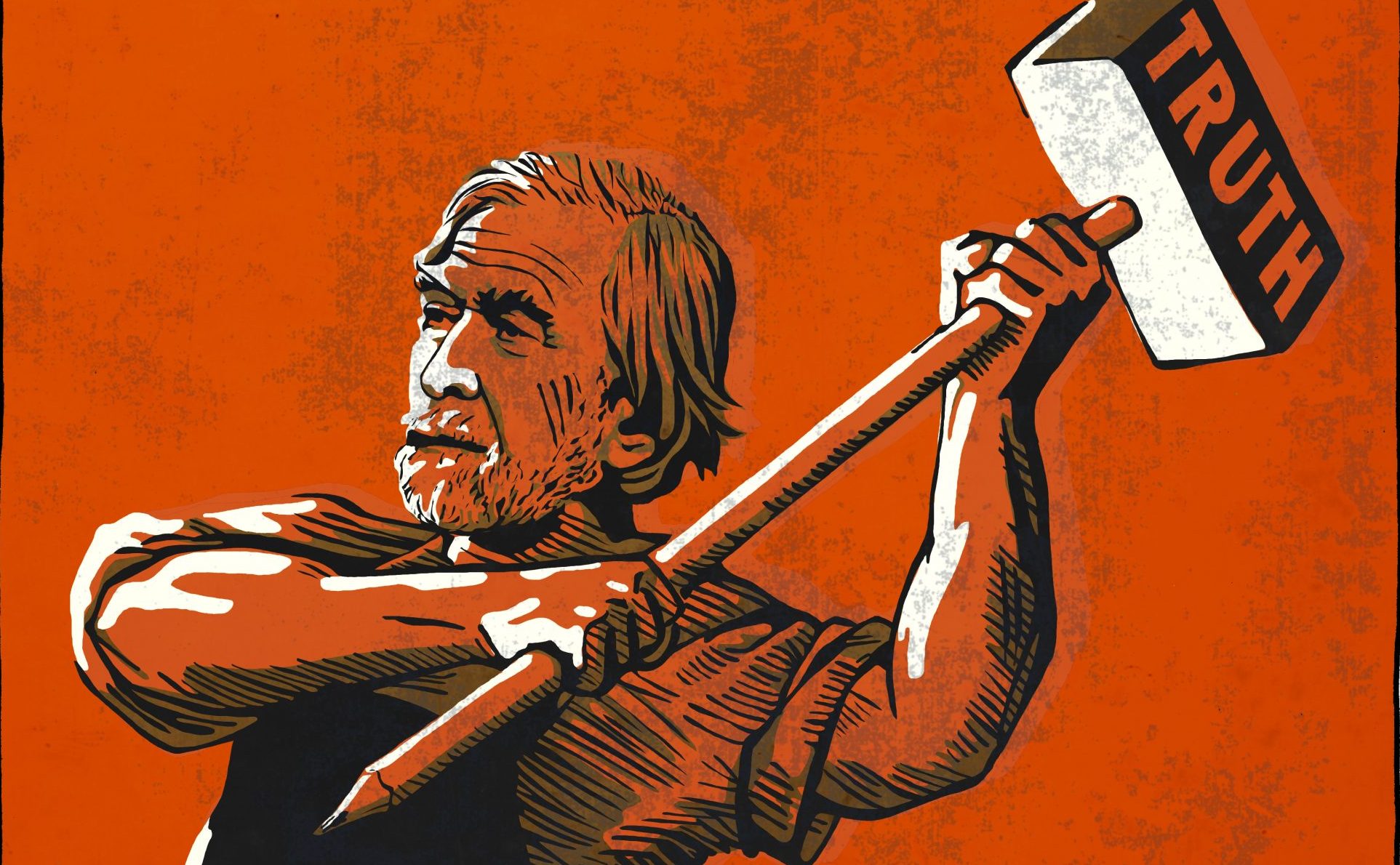 Above photo: By Mr. Fish.

Update: March 13 – Friday marked the third day of work stoppage for 16 members of Truthdig’s editorial team – including senior editors, columnists and copy desk staff – to protest unfair labor conditions and attempts by Publisher Zuade Kaufman to remove Editor-in-Chief and co-owner Robert Scheer. Though such group action is protected according to the National Labor Relations Board’s guidelines for concerted activity, Kaufman had immediately shut participants out of all functional aspects of their work, including access to their Truthdig email accounts and access to the site itself. She had also not responded to the group’s good-faith request for negotiation.

These actions on the publisher’s part are not in keeping with Section 8(a)(1) of the National Labor Relations Act, which states it is an unfair labor practice for employers to “interfere with,” or take adverse action against, those engaged in protected concerted activity.

The publisher pulled a story posted on Truthdig Wednesday to explain to readers the reasons for the stoppage and to call for good-faith negotiations with management about work conditions and future steps toward unionizing. NLRB guidelines stem from Great Depression-era legislation created to ensure workers’ rights.

Update: March 12 – The full staff of copy editors sent this message to Zuade Kaufman, the publisher of Truthdig, today.

We, the undersigned Truthdig copy desk members, have voted to support our colleagues in their efforts to address concerns voiced in their letter of March 11. Accordingly, effective immediately, we will not work until the editorial staff member return to their positions and substantive negotiations on the issues begin. We are taking this action because we believe that resolution of these issues will allow Truthdig to continue the vital mission it has pursued under your leadership.

California – Senior editors and contributors at Truthdig, including Executive Editor Kasia Anderson, Managing Editor, Jacob Sugarman, Foreign Editor Natasha Hakimi Zapata and Book Editor Eunice Wong, along with columnists Chris Hedges, Lee Camp and Paul Street and the cartoonist Dwayne Booth, aka Mr. Fish, as well as blogger Ilana Novick, announced in a joint letter today they were beginning a work stoppage today to protest what they describe as unfair labor conditions and the effort by the publisher, Zuade Kaufman, to remove the site’s founding Editor-in-Chief and co-owner Robert Scheer.

The letter, posted briefly on the site before being taken down and sent out to the 45,000 people on Truthdig’s email list, read:

In recent months, as has been publicly reported, Truthdig Publisher Zuade Kaufman and Editor in Chief Robert Scheer have been engaged in an ongoing dispute. That dispute is approaching its nadir as we are concerned Ms. Kaufman is attempting to take control of Truthdig, thus effectively removing Mr. Scheer from the website he co-owns and co-founded. This is unacceptable to us.

Since the website’s launch in 2005, Robert has helped guide Truthdig’s editorial voice, fearlessly exposing the corruption of Republican and Democratic administrations alike—an exception that proves the rule in progressive media. While liberals have largely turned their back on Julian Assange in recent years, Robert has remained one of his greatest champions. And as the mainstream media has resorted to the most cynical form of red-baiting against Sen. Bernie Sanders this election cycle, he has pushed back against it at every turn.

Robert is the rare editor who urges readers to examine the legitimate alienation and rage of those pushed aside by globalization and de-industrialization, rather than allow the election of Donald Trump to be blamed on Vladimir Putin and Russia. Under his guidance, Truthdig has stood beside Occupy Wall Street, Wikileaks, the indigenous people of Standing Rock, Black Lives Matter, #MeToo and countless other protest movements that have challenged entrenched power. We believe that he is irreplaceable.

But this work stoppage is ultimately about more than just Robert. For years, the Truthdig staff has worked under conditions that it feels fall well short of the website’s progressive values. Those include, but are not limited to, employment conditions that very possibly flout California’s labor laws. To ameliorate this situation, we are asking that management honor the following requests:

*Robert retain his position as Truthdig’s editor in chief

*The editorial team retain its independence from publishing

This list remains a work in progress, but management’s willingness to negotiate with the editorial team would demonstrate that all are acting in good faith, paving the way for future unionization. We maintain that a progressive publication cannot, and more essentially should not, exist without a union.

To reiterate, we are not striking because we want to harm Truthdig or anyone at the publication. Quite the opposite: We are striking because we care deeply about the website and are committed to its long-term health. We hope to receive a response in a timely fashion and that this work stoppage will be short-lived.

The editors and contributors also said they objected to new contracts being sent by the publisher to contract and other workers that despite Robert’s role as editorial director, stated that those working for the site would be reporting to Kaufman.  The contracts, none of which were evidently seen or approved by Scheer, also ask workers to surrender most of their labor and civil rights in apparent violation of the state of California’s labor laws.

The passage in the contract under the clause Waiver and Release reads:

In exchange for the signing bonus and other consideration provided for in this Agreement, you agree to waive any and all claims against the Company, its parent, subsidiary and affiliated corporations, and their respective successors, assignees, representatives, agents, shareholders, officers, directors, executives and employees, both  current and former (collectively, the “Releasees”), and to release and discharge the   Releases at any time prior to and including the date you sign this Agreement, whether known or unknown to you, including but not limited to any claims arising under any federal, state or local law, rule or ordinance, tort, employment contract (express or implied), independent contractor agreement or classification, public policy, or any other  obligation, including without limitation, any claims arising under the Age Discrimination  in Employment Act, Title VII of the Civil Rights Act of 1964, the Civil Rights Act of 1866, the Civil Rights Act of 1991, the Americans with Disabilities Act, the Family and Medical Leave Act, the Fair Labor Standards Act, the Employee Retirement Income Security Act of 1974, the Worker Adjustment and Retraining Notification Act of 1985, the California Fair Employment and Housing Act, the California Age Discrimination Act, the California Constitution, the California Labor Code, the California Wage Orders, the Private Attorneys General Act, the Califonria Business and Professions Code, the Laws established by the California Division of Labor Standards Enforcement, the California Family Rights Act, and any other federal, state or local labor, employee relations, wage/hour, and/or fair employment practices statute, rule or ordinance, as well as all claims for attorneys’ fees.  This waiver and release does not include (i) claims that may arise after you execute this Agreement, (ii) claims that cannot be waived as a matter of law or public policy, (iii) claims to vested pension benefits, and/or (iv) the right to seek enforcement of this Agreement.

A GENERAL RELEASE DOES NOT EXTEND TO CLAIMS WHICH THE CREDITOR DOES NOT KNOW OR SUSPECT TO EXIST IN HIS OR HER FAVOR AT THE TIME OF EXECUTING THE RELEASE, WHICH IF KNOWN BY HIM OR HER MUST HAVE MATERIALLY AFFECTED HIR OR HER SETTLEMENT WITH THE DEBTOR.

Thus, notwithstanding the provisions of Section 1542, and for the purpose of implementing a full and complete release as set forth herein, you expressly acknowledge that this Agreement is also intended to include in its effect, without limitation, all claims that you do not know or suspect to exist at the time of your execution of this Agreement, and that this Agreement contemplates the extinguishment of any such claim or claims.