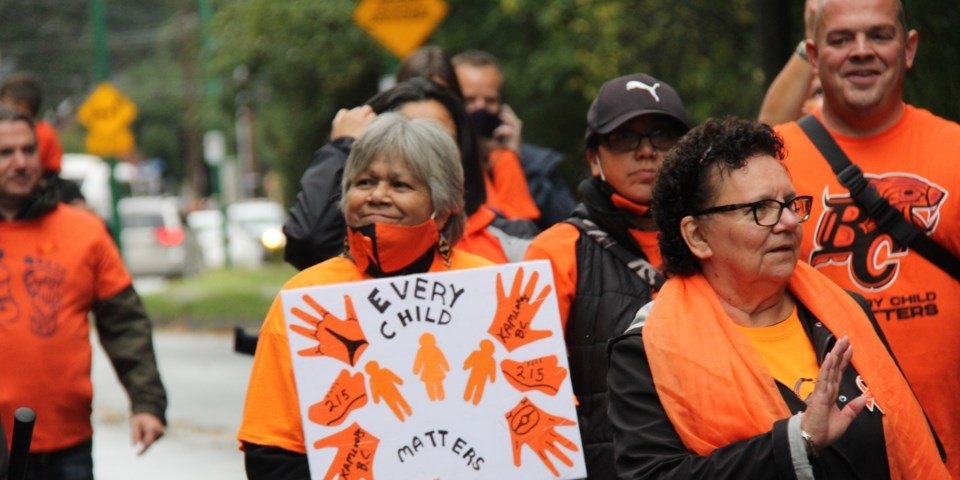 A sea of orange flowed down Dollarton Highway on Sept. 30 as members of the Tsleil-Waututh Nation community, and family members from Musqueam and Squamish nations, took part in a pilgrimage walk to commemorate the National Day for Truth and Reconciliation.

The rain did not dampen the spirits of community members who gathered at the Tsleil-Waututh Reserve administration building at 9 a.m. on Thursday, to walk 8.5 kilometres to the site of the former St. Paul’s Residential School, now home to St. Thomas Aquinas Regional Secondary School.

The morning began with drumming and song and an uplifting, positive feeling grew amongst the crowd as more than 100 members began the journey. It was also a sombre time for many members, as they retraced the steps their relatives took every day to “school.”

The Nation said the walk was a time to honour and remember the children who attended St. Paul’s and those who did not return home, as well as to “create healing for the community.”

Tsleil-Waututh members of all ages, including residential and day school survivors and their families, participated in the pilgrimage walk along with some members of the broader community.

“I’m feeling hopeful,” he said, as he looked at the crowd in orange gathering to walk alongside him.

“My late grandfather talked about our younger people rising up out of the ocean like the Thunderbird of old and grabbing the instruments of this Western world. And, I see that in many of our people now.”

He took a moment to reflect on how his ancestors, late father, Leonard George, his grandparents, and great-grandparents all attended residential school and “had to make that walk.”

“It means a lot to retrace the steps that they had to do,” George said.

“It was always a hard time of year, even as my dad aged, thinking about having to go back to school … at the end of different breaks. So, today, for me, it’s a personal thing to go on this journey that he walked sometimes and to reflect on that and to be mindful of that, and hopefully bring a little bit of closure for myself.”

He said he was grateful the community could come together to heal.

“This is not history, this is the legacy of the relationship between Canada and Indigenous people that spanned hundreds of years up until 1996, the effects of which we see today,” he said.

“We are beginning to heal from it, and one day there will be closure, but, you know, we need time and we need healing, and for all of our Indigenous people this day brings up a lot.

“I hope for those that are on the walk, that they just find a little bit of healing.”

Along the journey, which took around three hours, the community came out to show their solidarity. People wore orange and created a wall of protection, with many community members and children lining up along sections of Dollarton Highway, Third Street, and Cotton Road in front of Park & Tilford, holding hearts and placards with messages of support.

‘I Feel The Strength Of The Community’

Elder Stan Thomas, who attended St. Paul’s, is one survivor who retraced his steps today. He was only six years old when he left his home to attend the institution.

“I have had a flood of memories of this place with the recent news,” he said. “I am the youngest of eight children, and I was the last to go to residential school out of my siblings.

“Today, I feel the strength of the community as we took the journey here together to face this day with one heart and one mind.”

There were 18 residential schools in British Columbia. St. Paul’s, which was located on the 500 block of West Keith Road, next to the Squamish community of Eslhá7an, was the only institution in the Metro Vancouver area. It was opened in 1899 by the federal government’s Department of Indian Affairs and was managed and operated by the Roman Catholic Religious Teaching Order, the Sisters of Child Jesus.

Over 2,000 Indigenous children – representing six generations of Squamish, Musqueam, and Tsleil-Waututh Nations, and other Indigenous communities – were institutionalized there from grades 1 through 8 until it was closed in 1959.

Children in the school were segregated by age group and gender, often not permitted to visit other family members, stripped of their culture, and punished for speaking their native languages or taking part in their cultural traditions.

In August, an investigation into the site was launched by Squamish Nation, in partnership with Musqueam and Tsleil-Waututh nations, to find answers about the children who attended the institution but never made it home.

It wasn’t until 1984 that all residential schools in the province were closed down; the last one in Canada didn’t close until 1996.

“When we talk about those in residential and day schools, some may think it goes way back in history, but it doesn’t,” Tsleil-Waututh Nation Chief Jen Thomas said.

“It goes back to one generation in my family. My dad [Stan Thomas] went to St. Paul’s Indian Residential School. I’m grateful he survived. Otherwise, I wouldn’t be here today. … This is for his healing journey, and moving forward.”

Watching the crowd walk, Thomas said she felt “uplifted by the community.”

“I am grateful for the work that has yet to be done,” she said. “We just have to work together.”

Rest stations with water and support were set up along the pilgrimage route and the Integrated First Nations Unit ensured safety throughout the event. The walk ended with a ceremony, drumming, and singing at the former St. Paul’s site at 541 West Keith Rd.

On behalf of the Nation, George thanked the broader community, their allies, for their ongoing support on their journey to reconciliation and hoped that others who did not support them could find it in their hearts to understand.

“We also ask that you take this time to embrace not only the Tsleil-Waututh truth, but the truth of Indigenous communities across Canada,” he said.

“We ask that you reflect and commit to taking some form of action towards Reconciliation. Be a part of moving this country meaningfully from a dark past to a bright future.”

In June, the federal government passed legislation to make Sept. 30 a statutory holiday, as called for by the Truth and Reconciliation Commission in Call to Action 80. Earlier this month, the Province of British Columbia followed suit, recognizing it in the public sector. The date was chosen to coincide with Orange Shirt Day, which started in 2013.

While there are still many actions to complete and work to be done, for George, the future is full of hope.

“I feel contentment in my heart right now,” he said. “I feel a sense of peace and even though our people have suffered a lot, we are strong, and we are resilient.

“We will persevere and we will continue to regain our strength.”