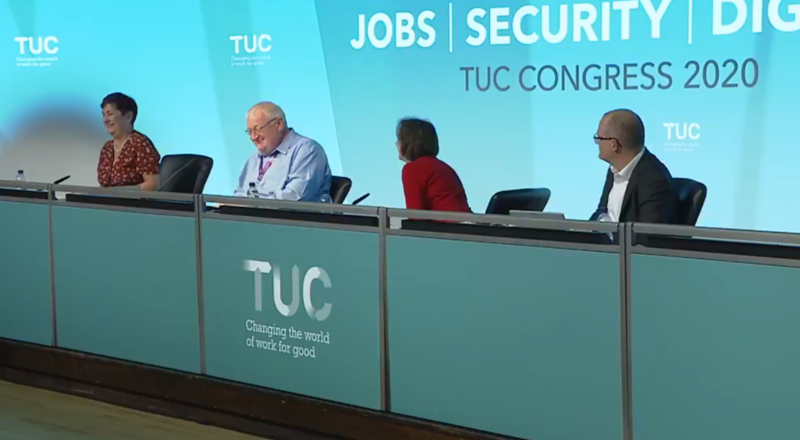 Above photo: The Trades Unions Congress held its 2020 conference online only. TUC.

The British Trades Union Congress has condemned Israel’s annexation plan, calling it “another significant step in the creation of a system of apartheid” in the West Bank.

Passed on Tuesday, the motion is thought to be the first time the British trade union umbrella body has described Israeli policies as apartheid.

The TUC motion calls for the UK to “take firm and decisive measures, including sanctions” against Israel to stop annexation, end the occupation and respect the right of Palestinian refugees to return.

It also called for unions around the world to join the campaign “to stop annexation and end apartheid.”

The general council also put out a statement saying it would “actively encourage affiliates, employers and pension funds to disinvest from, and boycott the goods of, companies who profit from illegal settlements and the occupation.”

Ben Jamal, director of the Palestine Solidarity Campaign in the UK, said: “We welcome this motion which reaffirms the strong support across the UK trade union movement for the rights of Palestinians.”

“There can be no normalized relations with any state practicing apartheid unless one is to become a reinforcing part of the system. We applaud the TUC for calling clearly for sanctions.”

The motion also commits the TUC to working with the Palestine Solidarity Campaign.

The TUC has joined the “growing consensus among progressives worldwide that Israel’s regime constitutes apartheid, military occupation and settler-colonialism,” the BNC said.

“We urge UK trade unions to take the next logical step and intensify effective and strategic BDS campaigns to end UK complicity in Israel’s oppression of Palestinians.”

Proposed by Britain’s second-largest union Unite, the motion was passed by the TUC’s general council. In normal circumstances, it would have been debated by delegates at the TUC’s annual conference.

But the coronavirus pandemic meant that it was held online instead, on Monday and Tuesday this week.

A TUC motion passed last year called for “stopping any arms trade with Israel used in violation of the human rights of the Palestinians.” But it did not explicitly call for sanctions.

The TUC’s accurate description of Israeli policies as apartheid this year represents a long-term historic shift away from support for Zionism.

TUC conferences in 1967 and 1976 actually passed motions in support of Israel. It was only with the Israeli invasion of Lebanon in 1982 that the tide began to turn.

That year, an emergency motion put forward by the Fire Brigades’ Union condemned “the death and destruction caused by the Israeli invasion” and called for “recognition of the national rights of the Palestinians to self-determination within an independent sovereign state.”

The motion was passed by delegates’ vote.

But academic Paul Kelemen, in his book The British Left and Zionism: History of a Divorce, notes that the general council at that time had actually tried to dissuade them from doing so.

More recent TUC support for Palestinian rights is the fruit of decades of campaigning by activists.