Tucson anarchists report on how the city exploded in the wake of a border patrol agent being found not guilty in the killing of a 16 year old boy.

On Wednesday, November 21st, a jury in Tucson, Arizona found Border Patrol agent Lonnie Swartz not guilty of involuntary manslaughter for his 2012 shooting of 16 year old José Antonio Elena Rodríguez. Though Lonnie Swartz’s killing of José Antonio is only one among many murders committed by Border Patrol, the particularly egregious nature of the shooting made it the first time in history that a BP agent has faced criminal charges after killing someone. Swartz shot through the border wall from Nogales, Arizona into Nogales, Sonora, hitting the unarmed teenager ten times in the back and killing him instantly. A previous trial had already found Swartz not guilty for second-degree murder, but could not come to a decision on manslaughter charges (report back from the march after that verdict here: https://itsgoingdown.org/tucson-az-jose-antonio-verdict-report-back/). This latest trial proved once more that the courts will never impose consequences on law enforcement officials for their killings, no matter how flagrantly racist or obviously unwarranted.

In response to the not guilty verdict, over 100 people gathered outside the Federal Courthouse before spilling into the busy intersection of Granada and Congress and blocking traffic in all directions. After holding the intersection for perhaps an hour, the crowd was urged to form a tight perimeter at the southwest corner of the intersection. With banners blocking police from entering or being able to see what was going on, folks applied a generous amount of wheatpaste to the asphalt before unfurling a massive paper message onto the street: José Antonio Presente! Using paintrollers that had previously been disguised as protest signs, people glued the message firmly to the road. 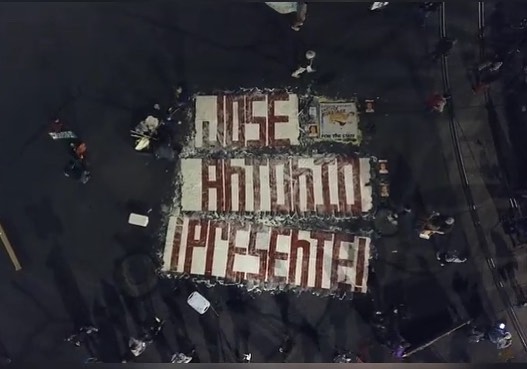 Later, the group set off on a march, chanting “chinga la migra” and “no justice, no peace, abolish the police!” While after the last verdict, the march eventually blocked busy freeway on/off ramps, this time the protesters settled for marching through some busy downtown thoroughfares—though there were reports that police closed some freeway access in anticipation of disruptions. After another hour or two, the crowd circled up at the downtown library for a few final calls of “José vive!” before dispersing. 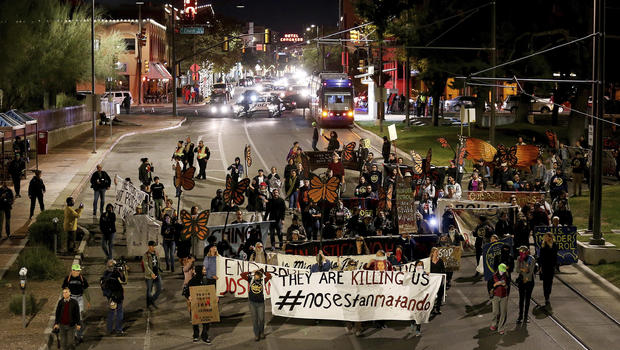 Soon after the march was over, we received word that the police had again closed the intersection in front of the courthouse. With help from the fire department, they were destroying the message that demonstrators had put down only hours earlier.

A publicly called for protest protecting and facilitating some members engaging in property crime—albeit, a minor property crime—is a major step forward in Tucson’s context. The cops, once again, were totally hands off and made no arrests, If we want our messaging to last more than a few hours next time, maybe it’s time to consider trying to normalize painting and/or spraypainting during events like this.

Happy Thanksgiving to everyone!

To our first responders, military personnel & medical professionals working today to keep us safe & healthy…
We are thankful for you!#Thanksgiving pic.twitter.com/3EWet5xc6J

A few members of the media were pushed out of the protest for being a bit too aggressive with their filming. Let’s keep this up! No need to harbor any illusions that they’re on our side. For proof that they will always parrot the police’s line we don’t need to look any further than what the main local journalist covering the march was retweeting right after the protest: