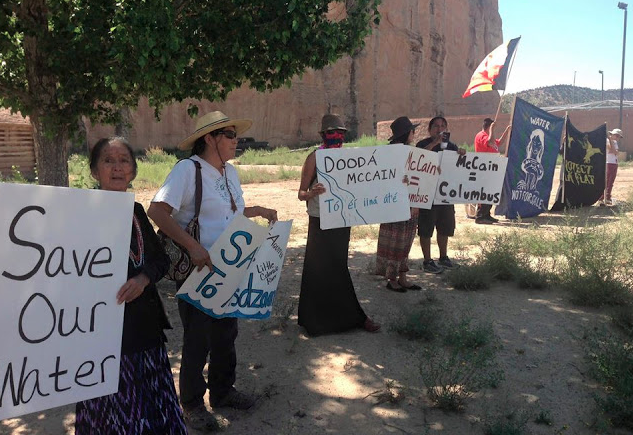 Note: In addition to the protest described in the article below, Senator McCain was protested by a group of who chased him off Navajo Nation land over his giveaway of Oak Flats land to corporate interests. Long time Indian country reporter Brenda Norrell reports:

Dine’ (Navajo) protesters blocked McCain’s speech and chased after his car, yelling at him that neither him nor the corporations he represents are welcome here.

Dine’ protesters posted photos and video on the Internet of chasing McCain’s car off the Navajo Nation Capitol of Window Rock, Arizona. Watch video of Dine’ chasing after McCain’s car…

She goes on to report how members of Indigenous Nations are joining together to protest “John McCain’s ecocidal and genocidal policies.”

About 30 people gathered outside the Tucson Electric Power headquarters this morning to protest U.S. Sen. John McCain’s role in the Oak Flat giveaway to foreign mining company Resolution Copper. Some of the protesters also wanted to raise awareness on a bill McCain sponsors—SB 750—which would waive laws on all federal public land and all tribal land within 100 miles of the U.S.-Mexico border.Simultaneously, the Republican senator was inside in a private meeting with TEP representatives.

“He’s having three private meetings this week, private town halls, while he refuses to meet with his constituents,” says Cyndi Tuell, an attorney, conservation advocate and a volunteer with the Sierra Club’s Borderlands campaign. “We are ashamed of him for that and ashamed of him for giving away the sacred Apache land of Oak Flat in a midnight deal in Congress.”The so-called Arizona Borderland Protection and Preservation Act—which was first introduced earlier this year, then backed off and is now making a comeback (Tuell anticipates Congress will re-explore it in September)—would “cut unnecessary red tape and enable Border Patrol agents to have access to all federally managed land in Southwest Arizona, so they can perform their jobs effectively, keep our communities safe, and secure the border once and for all.”Tuell says what the legislation proposes “flies in the face of what democracy is all about.” “Waiving all laws…based on erroneous information, and part of the reason he is so wrong is he won’t talk to the people who know he facts. (McCain) is saying the Border Patrol wants this bill and that is not true,” she says.On Thursday, Aug. 20, there will be a community forum on SB 750 at the Alliance for Global Justice, 225 E. 26th St., at 7:30 p.m., where panelists that include U.S. Rep. Raúl Grijalva, Dan Millis of the Sierra Club and Tuell, will discuss what advocacy groups call the “latest assault on undocumented workers, climate refugees and the Sonoran Desert.”Tuell says she and several others have been trying to meet, or at the very least speak, with McCain about their concerns on Oak Flat and the border security bill, but that they have been told by his office he has been unavailable. “He meets with the people who make him millions of dollars, he doesn’t meet with the average citizen,” she says. “He refuses to meet with his constituents. Basically, if you disagree with the position of your senator, he is going to refuse to meet with you, and then tell the world he is representing the will of the people of Southern Arizona, and that is not true.”