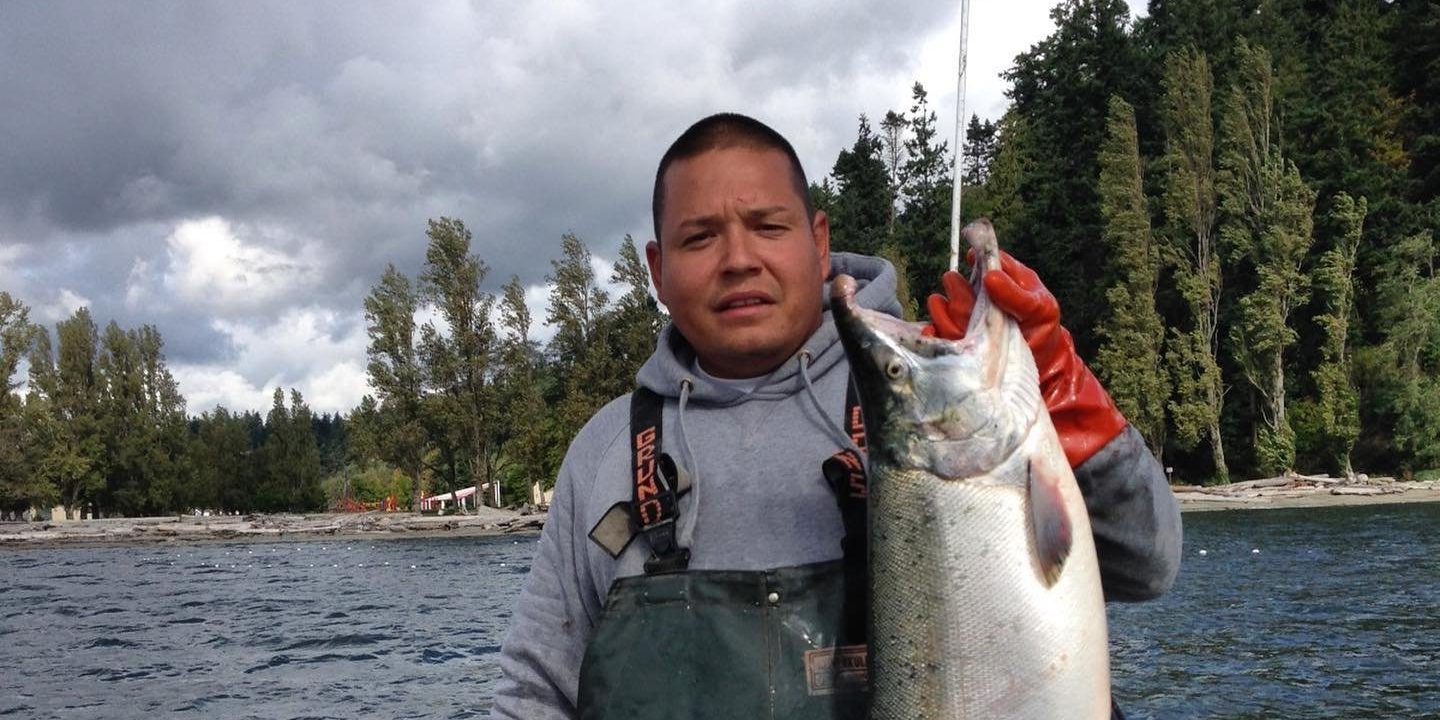 “Please Stand With Us.”

I am a Tulalip Tribal member, Treaty fishermen, and elected member of the Tulalip Board of Directors. My Indian name from my father’s side is Wanbdi Wan Wanna Kinyan, which in English means “Eagle Who Takes Flight.”

For the last six years, Anthony Paul and I have been the target of a racially motivated criminal investigation and prosecution by the State of Washington’s Department of Fish and Wildlife (WDFW). But we are not the real target. The State’s real target is Tulalip Treaty rights. The real target is our way of life. On Monday, October 25, 2021 at 9 AM, we will appear in Skagit County Superior Court in Mt. Vernon to defend our existence. Please stand with us.

I realized my dream in 2015 when I started a Tribal fish buying business with Anthony, who is also a Tulalip tribal member. We formed Puget Sound Seafoods Distributors (PSSD). We were able to bring Tribal representation to the docks at Tulalip. We started at Tulalip and before long we were able to buy and sell Treaty fish and shellfish throughout the Puget Sound.

Through inter-Tribal collective bargaining power, we increased the price that Treaty fishermen were paid for their salmon and crab. Tribal fishermen were once paid as little as $4.00 per pound for crab. PSSD helped raise their price to $12.00 per pound. We would mark up the fish or crab by 50 to 75 cents per pound and let the fishermen keep the rest. Millions of dollars were being kept in Tribal fishing communities. Rising waters lifted all canoes.

By September of 2015, WDFW set their sights on us. They wrote a racist investigation report that called me dumb (“not so smart”) and called Anthony greedy (“likes money”) and “dirty.”

That same month WDFW Detective Wendy Willette began to investigate us for having “monopolized” the Treaty fish market. In another racist report, she asked: “Why is PSSD selling crab to other wholesalers while monopolizing the Tulalip crab fishery? Why has PSSD taken all business from other established Tulalip buyers?” When a non-tribal buyer at Tulalip complained to Willette in early 2016 that Tulalip fishermen were telling him, “We’re gonna sell to our own kind,” Willette called what we were doing “reverse racism.” Let me clear: There is nothing wrong or illegal about our people buying and selling fish with one another. We have always bartered with our fish. That is our Treaty right, and it is none of the State’s business.

In June of 2016, Willette manufactured evidence and falsified testimony to obtain a search warrant to raid my home on the Tulalip Reservation. In support of a search warrant issued by the King County Superior Court, which has no jurisdiction at Tulalip, Willette wrote in italics: “Due to concerns regarding confidentiality, the Tulalip Tribes will not be contacted regarding this matter until after service of the search warrant.” She openly disrespected and disregarded Tulalip sovereignty.

On June 13, 2016, WDFW raided my and Anthony’s homes and arrested us both at the Everett Marina. WDFW did not notify the Tulalip Board of Directors before its cops infiltrated our Reservation. They came down to the Tribal Marina like they owned the place. While I was handcuffed in the back of a cop car, they tore through my house in front of my wife and youngest child. I have never felt so humiliated.

Willette came back to Tulalip on August 15, 2016 to surveil other Tulalip fishermen’s homes on the Reservation. Willette again did not tell the Tribe she was coming onto our lands.

PSSD went out of business soon after the raid. People believed we must have done something wrong. Nobody would sell fish to us anymore. The price of Tulalip crab went back to as low as $4.00 per pound. Five years later, Tulalip fishermen are forced to again accept the low prices offered by non-tribal fish buyers. They have no other option. WDFW has taken food off our Treaty fishermen’s tables and hurt their families. WDFW has hurt our entire Tribe.

In 2018, Anthony and I sued WDFW in federal court for its violation of our civil rights. We recently settled our false arrest claims out of court for $50,000.00. The State does not pay that kind of money without knowing it did something wrong.

Meanwhile, Willette and Washington State Attorney General Bob Ferguson’s office shopped criminal charges against us both to six federal, state, and local law enforcement agencies. Only after the U.S. Department of Justice, State Attorney General, and King, Snohomish, and Pierce Counties all told Willette they did not see a criminal case against us, did the elected Skagit County Prosecutor agree to charge us.

In February of 2018, Anthony and I were charged in Skagit County Superior Court with five felonies for alleged shellfish trafficking. As I have said under other oath, we did nothing wrong.

That same year former Tulalip Tribal Chairwoman Marie Zackuse wrote DFW that the Skagit County prosecution violates Tulalip Treaty rights and the U.S. v. Washington decision. Chairwoman Zackuse said we “don’t believe a bait claim violation rises to the level of a felony or that WDFW should be attempting to exercise State jurisdiction” over me or Anthony. Willette called our Tribe’s assertion of Treaty rights a “tactic” and a “game” and the Skagit County Prosecutor ignored Tulalip’s objection.

Three years later we are still in Skagit County, defending against the State’s false criminal charges. We are facing jailtime if we are found guilty.

WDFW and the Skagit County Prosecutor allege that PSSD “trafficked” clam bait between Tulalip Treaty fishermen in violation of state laws, which don’t apply to us. They say a former PSSD employee bought and sold Treaty clam bait harvested at Cama Beach or elsewhere in the U&A. They know the clam bait was bought at Merle and Carnegie Hayes’ home on the Tulalip Reservation. They know other bait was sold to Treaty crabbers on our beaches at Tulalip. They know all of the bait came from our Treaty abundance and it was all bought and sold in our Treaty territories. That means the State lacks jurisdiction.

When some of the Treaty clam bait ended up in a cold storage facility in Burlington, Willette seized it and destroyed it. She took five totes of clams harvested from our Treaty abundance and threw them into a landfill. She destroyed the evidence she claimed we “trafficked.” She disrespected our Treaty harvest. She violated our Treaty and U.S. v. Washington. Willette’s bad faith is now on trial before the Skagit County Superior Court.

I am grateful the Northwest Treaty Tribes recently wrote WDFW to call out its “discriminatory or illegal enforcement actions against tribal members in treaty territories and waters.” The Tribes explained: “From our standpoint, it appears WDFW is focusing its enforcement efforts against tribal members who typically do not have the resources to defend themselves.” This is precisely what is happening. The State is afraid of getting beaten in federal court again by Tribes so WDFW preys on Tribal members like me and Anthony. But we are not backing down.

This coming Monday, Anthony and I will fight back. We will expose WDFW corruption and Willette’s racism. We will stand on Tulalip Tribal sovereignty. We will assert our Treaty fishing rights. We will defend our way of life. We will do so not only for ourselves, but also for our children and unborn grandchildren. We hope you will stand with us.