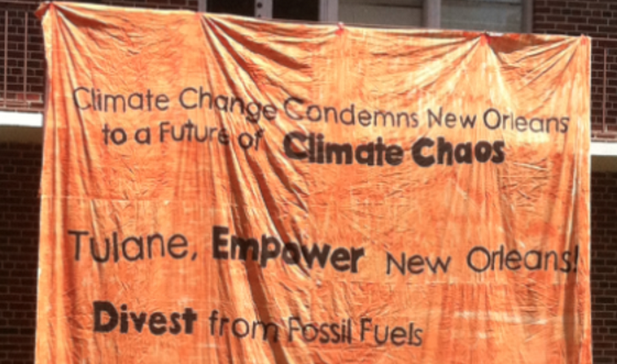 Tulane students and alumni are planning to stage a sit-in at the office of university president Michael Fitts this week to demand the school divest its $1 billion endowment from fossil fuels. The sit-in is scheduled to take place from 8:45 a.m. to 5 p.m. Tuesday through Thursday at Gibson Hall, 2823 St. Charles Ave.

Divest Tulane, a two-year-old, student-led campaign, is organizing the event. Its goal, according to Emma Collin, a Tulane senior and member of Divest Tulane, is to pressure the school to take the money from its endowment that is invested in fossil fuels and put it instead in “sustainable community solutions.”

“We’re not trying to hurt the fossil fuel industry,” Collin said. “We’re trying to draw attention to the fact that climate change is a huge and urgent problem that threatens Louisiana and New Orleans profoundly.”

Divest Tulane is part of an international movement. Twenty-six colleges and universities around the world have committed to divesting from fossil fuels, according to the website Fossil Free, and hundreds more have active campaigns.

A 2013 University of Oxford study noted that the effort to persuade investors to remove their money from the fossil fuel industry is the fastest growing divestment campaign in history, outpacing similar initiatives against apartheid in South Africa, tobacco and gambling.

On March 16, students occupied an administrative building at Oxford to protest the university’s deferring of a decision on whether to divest its $2 billion endowment from coal and tar sands.

The Tulane sit-in is partly a reaction to what Divest Tulane members call a lack of response from school administrators to a growing demand for divestment.

Last April, then-president Scott Cowen rejected a request for divestment in a letter to members of Divest Tulane.

“Although we agree with you on the goal, we do not see divesting from the fossil fuel industry as an appropriate or effective tactic in achieving the desired end of reversing or slowing down climate change,” Cowen wrote.

Collin said 58 percent of Tulane’s student body has voted in favor of fossil fuel divestment. Since Fitts took over as president last summer, she said, members of Divest Tulane have met with him to discuss their concerns but have made little headway.

“It has become clear that President Fitts and Tulane board members are not going to work on this issue until they feel pressured to do so,” Collin said. The sit-in, she added, is an effort to “put pressure on the administration to start a more meaningful conversation.”

The sit-in comes at a time when Tulane is actively campaigning to raise another billion dollars for its endowment, an effort to compete with peer institutions such as Duke University ($6.04 billion) and Emory University ($5.82 billion).

Fitts, during an interview in December, said Tulane raised $126 million last year. To run a $1 billion campaign, the university has to raise $100 million or more every year, he said.