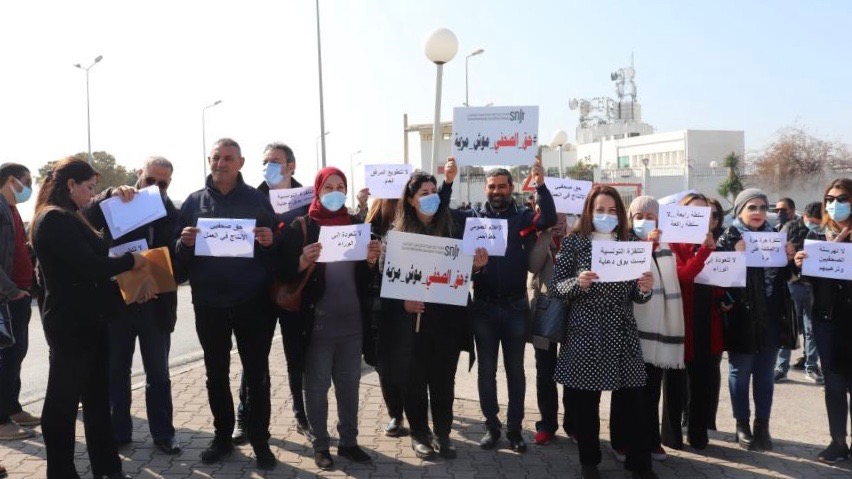 Above Photo: Members of the National Syndicate of Tunisian Journalists (SNJT) protest in front of the state television channel headquarters on March 11, 2022. SNJT / Human Rights Watch.

The announcement of the journalists’ general strike came a day before government authorities detained a local news reporter at Mosaique FM under anti-terrorism laws.

Journalists in Tunisia will go on a nationwide general strike on April 2 to protest governmental interference in public media and to defend the freedom of speech and freedom of the press in the country. The National Syndicate for Tunisian Journalists (SNJT), Tunisia’s main journalists’ union, announced on Wednesday, March 23, that it has approved a mass strike by journalists. Union official Amira Mohammed cited the “president’s attempts to control public media and the authorities’ insistence on hitting the sector” as the main reason for the strike.

The journalists’ union has criticized president Kais Saied and his regime for a number of recent measures which according to them drastically reduced the independence of state media. These include attempts to bring the state television directly under the control of the president, banning state television from inviting opposition political figures in debate programs, and severe restrictions on journalists regarding reporting on information that the government might deem sensitive. Several journalists who refused to reveal their sources to the government have also been arrested. Speaking to news outlets, union head Mohamed Yassine Jelassi said that Tunisia “has become an authoritarian state that jails and intimidates journalists. Since July 25, the people are imprisoned for their thoughts and tweets and are tried militarily.” He added that the authorities are “seeking to frighten journalists and disrupt them from doing their job” by introducing new restrictive measures and laws which enable the regime to target and persecute journalists.

On July 25 last year, the president through a series of extraordinary measures seized virtually all executive and legislative power in Tunisia, dismissing the prime minister and government and suspending the national parliament. These actions have been widely condemned in the country and by the international community. Many in the political opposition and civil society have termed these moves an unconstitutional and anti-democratic “presidential coup.” Rights groups have warned that the country may return to one-man authoritarian rule, like under former president Zine Abidine Ben Ali who was overthrown in a hard fought revolution in 2011. The new constitution after the revolution had guaranteed many of the civil liberties and press freedoms that journalists are now fighting to protect.

Since seizing power, president Saied has announced the holding of a referendum to write up a new constitution, to be followed by general elections. This move has been rejected by several sections and regular protests have been witnessed in opposition to the president’s power grab.

The announcement of the journalists general strike came a day before government authorities detained a local news reporter at Mosaique FM under anti-terrorism laws. The anti-terrorism police arrested Khalifa Guesmi in the central region of Kairouan last week on Friday for refusing to reveal his sources for an article on the break-up of a “terrorist cell” which reportedly had a former soldier and a university professor as members. Two other journalists with Mosaique FM, as well as its editor-in-chief Houcine Dabbabi, were also summoned by an anti-terror judge for questioning in the case. SNJT president Jelassi denounced the arrest in a press conference as the “gravest attack” on press freedom since the 2011 revolution. He said that the arrest was “an attack on press freedom… and journalists’ right to access information” and “it reflects a policy of using state institutions to silence and intimidate journalists. It is an attack on journalists’ right to protect their sources, which is guaranteed under Tunisian law.”

The International Federation of Journalists (IFJ) also called upon the government to immediately release Guesmi. IFJ president Anthony Bellanger said in a statement, “President Saied has a duty to defend freedom of the press and ensure the security of our colleagues as they do their work. We cannot tolerate journalists continually being targeted.”