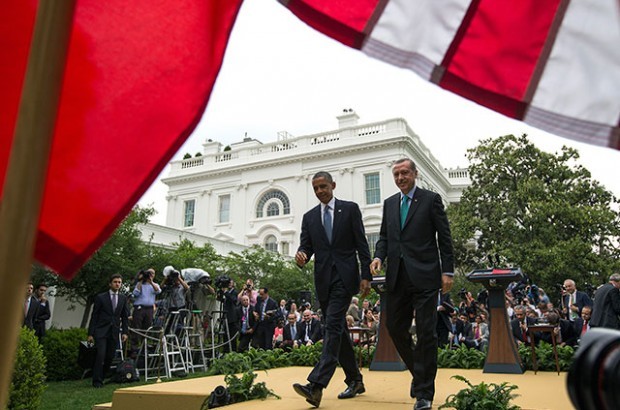 Turkey And Iran Reach Agreement On Conditions For Syria Peace

Above Photo: President Obama and Prime Minister Recep Tayyip Erdogan of Turkey leave after holding a joint news conference, at the White House in Washington, May 16, 2013. (Doug Mills / The New York Times)

In a stunning diplomatic surprise, Turkey and Iran have announced a preliminary agreement on fundamental principles for a settlement of the Syrian conflict.

The dramatic turn in the diplomacy of the Syria War was revealed in Turkish Prime Minister Binali Yildirim’s regular weekly speech to the ruling AKP Party in the parliament and confirmed by a senior Iranian foreign ministry official Tuesday.

Both Yildirim’s speech and the Iranian corroboration were reported Tuesday by Al-Araby Al-Jadeed and Al-Hayat, Arabic-language newspapers published in London, but the potentially pivotal development has been unreported thus far in Western news media.

The common approach to a Syria settlement outlined by Turkey and Iran represent what appears to be the first significant diplomatic break in a five-year international conflict on Syria that has been immune from any real peace negotiations up to now. International conferences on Syria under UN auspices have generated no real moves toward compromise.

The new negotiations between Iran and Turkey are the result of a major policy shift by the government of Turkish President Recep Tayyip Erdogan toward diplomatic cooperation with Russia and Iran on Syria and away from alignment with the United States and its Gulf allies Saudi Arabia and Qatar. Turkey has been coordinating military assistance to the armed opposition to the Assad government — including jihadists and other hardline extremists — with Saudi Arabia and Qatar since early in the war. However, Erdogan began searching in May for an alternative policy more in line with Turkey’s primary strategic interest in Syria: containing the threat of Kurdish demands for a separate state.

The announced agreement on broad principles for ending the Syrian crisis is only the beginning of a process of negotiations on the details of a settlement, as Iran’s Deputy Foreign Minister Hossein Jaberi Ansari made clear. “This agreement on the general lines will contribute to creating an environment suitable to solving the Syrian crisis,” Ansari said, according to Al Hayat.

It is also possible that Turkey may be planning to use the threat of allying with Russia and Iran on Syria to force the United States to reduce its own reliance on Kurdish forces in Northern Syria — the main issue dividing US and Turkish policies toward the conflict. But Yildirim had already hinted last month — before the failed military coup in Turkey and the launching of a new offensive by al-Qaeda’s al-Nusra Front around and in Aleppo — at Turkey’s intention to revise its policy toward Syria in order to prevent Kurdish forces in Syria from establishing their own mini-state.

Yildirim said in his speech Tuesday that the solution to the Syrian crisis would require “two basic conditions: first to preserve the territorial unity of Syria and second, establishing a system of government in which all ethnicities and religions are represented.”

In the context of the territorial unity issue, Yildirim raised the specter of an international drift toward the partitioning of Syria. “Someone would come and say, I will give the West of Syria to one,” he said, “and the south to another and the north to the Kurds.”

“This is not possible,” said Yildirim, meaning that Turkey would not stand for it.

The Turkish prime minister’s reference to the threat of partition in general and Kurdish inheritance of much of northern Syria in particular was clearly aimed at the Obama administration’s de facto military alliance with the YPG militia units of theKurdish Democratic Union Party (PYD) in the war against Daesh. That policy has encouraged the Kurds to continue to extend their territorial control westward along the Turkish border.

Turkey is especially upset that the YPG units have already moved west of the Euphrates River, which was Turkey’s publicly announced “red line,” and don’t intend to stop. Turkey has been demanding that the United States keep its promise that the Kurds will retreat to east of the Euphrates, but the YPG has said it intends to link Manbij — the city west of the Euphrates that it has just helped recover from Daesh — with Afrin and then gain control of al-Bab city on the border, thus uniting two previously separate Kurdish zones of control.

Turkey fears that a consolidation of Kurdish power over such a large territory on the Turkish border will embolden the militant Kurdistan Workers’ Party (PKK) in Turkey to demand its own state. “A Kurdish state in the Middle East,” Yildirim declared, “will not bring a solution.”

On the second condition for a settlement, Yildirim said there is a “possibility to establish a Syrian administration in which all of Syria’s religious communities and ethnicities can be represented….” After that was accomplished, he said, “there will be no obstacle to reaching a solution.”

Al-Hayat quoted Ansari as saying that a third principle discussed but not agreed on was that “the Syrian people will decide their own fate.” That was apparently a coded reference to the fate of Syrian president Bashar al-Assad. Turkey has publicly insisted in the past that Assad must step down before a settlement can be reached.

Yildirim’s language on the second principle and Ansari’s further clarification suggest that Turkey is dangling before Iran and Russia the possibility that Assad could remain in the government if Turkey is satisfied with a set of reforms to assure that all ethnic and religious communities in Syria have adequate political representation. Despite speculation by pundits that Iran would not mind having Syria carved up into a set of enclaves under foreign protection, Tehran has responded with unconditional endorsement of the Turkish demand.

The principles that have been announced indicate that Turkey will insist on Russia and Iran using their weight in Syria to pressure the Kurds to retreat from their territorial gains in the northwest. Turkey, in return, would have to halt all support for the armed opposition, starting with its favorite Syrian military client Ahrar al Sham and that group’s close political-military ally, the newly renamed Jabhat Fateh al-Sham — the al-Qaeda affiliate formerly called Jabhat al-Nusra.

After that summit, Bogdanov briefed Iranian Foreign Minister Mohammad Javad Zarif on the Russian-Turkish discussions related to Syria. That led to Zarif’s crucial visit to Ankara last Friday — including a meeting with Erdogan — which Ansari said was necessary to the formulation of the framework that was agreed to by Turkey.

The two countries will try to keep the diplomatic momentum toward an agreement this coming week, when Turkey’s Yildiz will travel to Tehran for more negotiations on the framework, according to Al-Hayat. Although it is still partial and tentative, the framework appears to offer far more hope for peace than any cooperation between Russia and an Obama administration without any consistent strategy.