Describing the protesters as troublemakers, Erdoğan said the government had reached the “end of its patience” over the continuing demonstrations against his leadership, in which five people have been killed since 31 May. Erdoğan had earlier issued a 24-hour deadline to clear Taksim Square and Gezi park.

Erdoğan spoke as the latest person to die in the demonstrations was named as 26-year-old Ethem Sarısülük, who had been on life support for days. He was pronounced dead after he was hit in the head by a tear gas canister on 1 June during a protest in the capital, Ankara.

The protests erupted after a violent police crackdown on 31 May following a sit-in by activists objecting to a development project that would involve cutting down the trees in Gezi Park and replacing them with a replica of an Ottoman-era barracks. Since then, protests have spread to dozens of cities and been transformed into a broader complaint over Erdoğan’s style of government.

“We have arrived at the end of our patience,” Erdoğan told local party leaders in a speech in Ankara yesterday. “I am giving you my final warning.”

He urged parents with children at the park to convince them to pack up and go home. Erdoğan added that he had instructed police that “we cannot allow lawbreakers to hang around freely in this square … We will clean the square”. 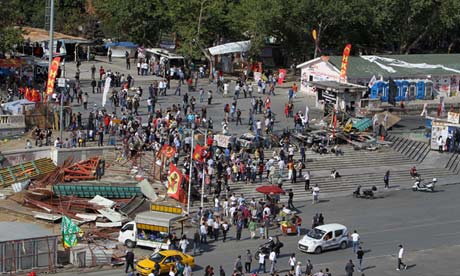 Responding to a vote in the European parliament in Strasbourg, Erdoğan added: “I won’t recognise the decision that the European Union parliament is going to take about us … Who do you think you are by taking such a decision?”

Although there were no fresh clashes yesterday, many have interpreted Erdoğan’s remarks as a clear signal that he will move soon to clear the park of protesters.

A new poll of those occupying Gezi park suggests that almost 60% are protesting about Erdoğan’s style of government, which opponents have criticised for its creeping authoritarianism.

Despite the warnings, new protesters of all ages continued to arrive in the camp, insisting they would not be frightened away. Among them was Kerim Ozken, 63, a retired bank worker and writer. “I think the police might attack again tonight,” he said, reflecting the fears of many in the camp, which is surrounded in places by makeshift barricades. “Tayyip [Erdoğan] said it will be over tonight. He thinks it is a war. It is idiotic. Really idiotic. He thinks he can change people’s minds by force.”

So far during the protests, 5,000 protesters and 600 police have been reported injured.

Erdoğan’s defiant tone comes despite the floating of a proposal to have a popular referendum on the fate of the park. Pouring cold water on that notion, a senior judge insisted that the courts had already ruled on the development.

Istanbul governor Hüseyin Avni Mutlu went on a nationally-televised talk show on Thursday and offered to meet with the demonstrators.

Link to video: Ekumenopolis: the roots of Istanbul’s protests

He said no police raid was yet planned for the park, though he did not rule one out. He said the public would be informed ahead of time if one was imminent.