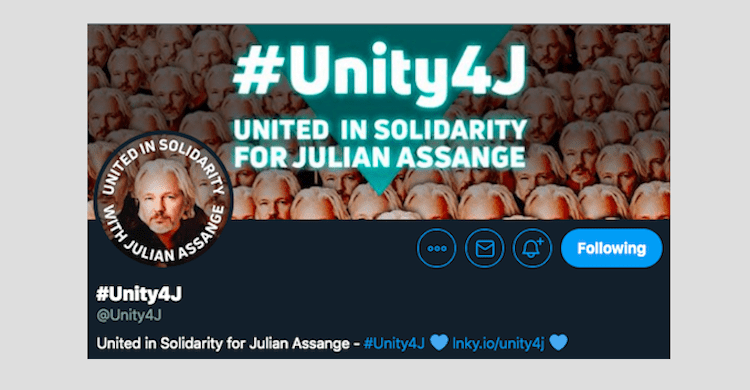 After a week of vocal protests from online supporters of Julian Assange, Twitter has reversed its unjust removal of the prominent pro-Assange activism account @Unity4J.

After the account was suspended without any explanation being presented to its operators, Assange supporters drew a clear line in the sand against internet censorship and began making a big noise that couldn’t be ignored. The account’s suspension drew condemnations from high-profile Assange supporters like Pink Floyd’s Roger Waters, World Socialist Website, RT and Lee Camp, as well as a sustained social media campaign by grassroots supporters which included artwork, memes, and of course relentless “tagging” of Twitter Support and Twitter CEO Jack Dorsey.

Political dissidents in general, and Assange supporters in particular, can take this as a very positive sign. It cannot be denied that there is pressure being applied to new media platforms like Twitter, Facebook and Youtube to forcibly marginalize all perspectives which fall outside the ever-shrinking Overton window of approved political discourse, but it also cannot be denied that speaking out works. If enough people push back against internet censorship to make it too conspicuous and obvious, it can’t happen.

We know that @twitter can and does reinstate accounts after suspension in the wake of a public outcry: @caitoz was suspended only to be reinstated after multiple journalists spoke out against it. @twittersupport @jack reinstate @Unity4J, an account that never broke Twitter rules. https://t.co/ltyGEfedcz

Unity4J co-founder Elizabeth Lea Vos called this from the early hours of the account’s suspension, tweeting, “We know that Twitter can and does reinstate accounts after suspension in the wake of a public outcry: @caitoz was suspended only to be reinstated after multiple journalists spoke out against it.”

“@caitoz” is my account, which was indeed reinstated after I was suspended from Twitter for expressing political wrongthink last year. A bunch of high-profile journalists and activists helped voice objection to my unjust removal from the platform, not necessarily because they liked my work but because they understood that the direction the platform was headed posed a grave threat to all politically dissident speech.

So we see a pattern here where censorship can only happen in the unseen margins. In a society where our rulers must maintain their nice guy image of free speech and democracy, censorship only works when it’s invisible. The social engineers cannot operate in an overtly totalitarian way without shattering the free democracy image and thus losing the ability to effectively propagandize the masses, without which they cannot rule. We can use this weakness of theirs to our advantage by continually ringing alarm bells and shining a spotlight on any overtly totalitarian behavior yelling “What’s this? Why are you doing that? Hey everyone, come look at this weird thing they’re doing!” Internet censorship in its current form can’t operate under such conditions.

Though Twitter’s opaque and unaccountable moderation process makes it impossible to ever know exactly what happened behind the scenes, from my own experience it’s probably safe to assume that @Unity4J was conducting itself in the same way thousands of other Twitter accounts behave every single day without issue, but it got singled out (possibly via establishment-friendly mass reporting) due to its dissident political speech. Some admin ruled that if you squint at the account’s behavior and the Twitter rules in just the right way, removing the account was warranted. Then a bunch of loud complaints began coming in, prompting an investigation which found that by golly, it turns out that we don’t have to squint at the facts of the matter in that weird way after all. After which the account was restored.

Thank you to @jack and @TwitterSupport, along with our many, many supporters around the globe for taking action to get this account restored. #FreeAssange pic.twitter.com/i6zUdQ9upA

Whenever there’s a spate of iron-fisted censorship from a large online platform, I see many dissidents talking about vacating that platform in favor of fringe sites with a more tolerant attitude toward dissident speech. Please do not do this. If you want to spend time on a much smaller platform like Mastodon or Minds then by all means go ahead and do so, but please remain active on large, mainstream sites as well.

Remember, the goal of all political dissent is to get dissident ideas into mainstream consciousness. If we all vacate the areas where the mainstream public are spending their time, we’re doing the social engineers’ job for them by quarantining ourselves to some isolated fringe sector of the internet. That’s exactly what they want us to do. They want us to remove ourselves so we can’t infect the mainstream herd with wrongthink.

So don’t do it for them. If they’re going to keep clamping down on dissident speech online, force them to do it out in the open where everyone can see. As we’ve just witnessed, they have a much, much harder time conducting censorship while under the light of public scrutiny.

Our job here is very simple: if we can get the mainstream public to start paying attention to the actual mechanisms of empire, oligarchy and oppression, we win. If we can’t, we lose. Everything that doesn’t help us toward this end is a frivolous distraction. The social engineers understand all of this quite clearly. We need to understand it too.

Stand in the center of the public stage, and keep infecting the herd.