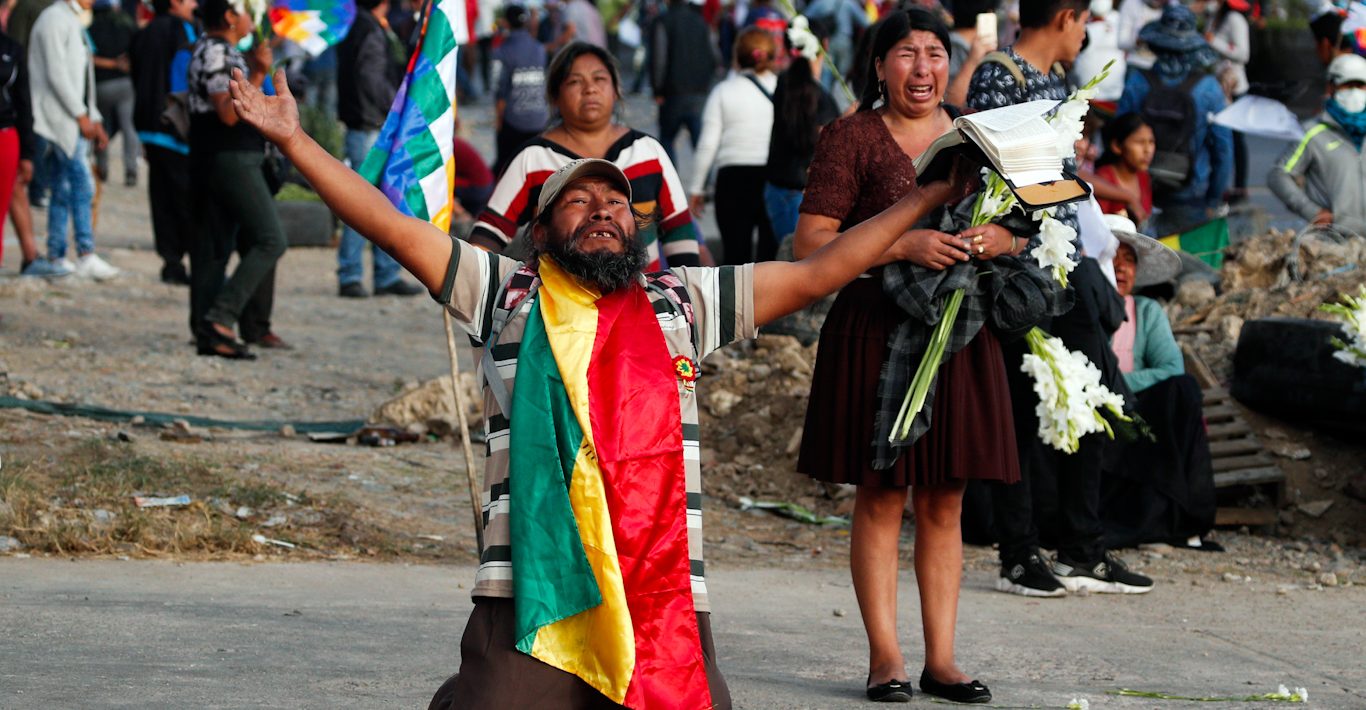 Above photo: A coca leaf producer kneels holding a bible with his arms outspread asking police to open the way so a march by supports of Evo Morales may continue to Cochabamba, Bolivia, Nov. 16, 2019. Juan Karita | AP.

MintPress News, along with a number of independent Bolivian news outlets and journalists covering the unrest there, were all targeted for suspension at the same time.

Social media giant Twitter took the step of suspending the official account of MintPress News on Saturday. Without warning, the nine-year-old account with 64,000 followers was abruptly labeled as “fake” or “spam” and restricted. This move is becoming a frequent occurrence for alternative media, especially those that openly challenge U.S. power globally.

Immediately preceding the ban, MintPress had been sharing stories about Israeli government crimes against Palestinians, the Saudi-led onslaught in Yemen (both funded and supported by Washington), and about activists challenging chemical giant Monsanto’s latest plans. However, MintPess correspondent Ollie Vargas, stationed in Bolivia and covering the coup and other events there, had another theory on the suspension. Vargas noted that his account, along with union leader Leonardo Loza and independent Bolivian outlets Kawsachun Coca and Kawsachun News were all suspended at the same time. “There was a coordinated takedown of numerous users & outlets based in Chapare, Bolivia. Thousands of fake accounts appeared after the coup. We believe they’re being mobilized to mass report those who criticize the regime,” he said. Since the November coup, Bolivia has been the sight of intense political struggle, with MintPress one of the only Western outlets, large or small, extensively covering the situation (and from a perspective that directly challenges the official US government line). Vargas added that all those accounts suspended appeared in his Twitter bio.

In December, MintPress reported how the strongly conservative Bolivian elite is treating social media as a key battleground in pushing the coup forward, with over 5,000 accounts created on the day of the insurrection tweeting using pro-coup hashtags. With the new administration still lacking both legitimacy and public support, it appears the next step is to simply silence dissenting voices online like they have been silenced inside the country. Kawsachun Coca and Kawsachun News, located in the Chapare region, still not under government control, are among the only remaining outlets critical of the Añez administration.

As Twitter has developed into a worldwide medium of communication, it has also grown an increasingly close relationship with Western state power. In September, a senior Twitter executive was unmasked as an active duty officer in a British Army brigade whose specialty was online and psychological warfare. It was almost entirely ignored by corporate media; the one and only journalist at a major publication covering the story was pushed out of his job weeks later. Earlier this month, Twitter announced it worked with a hawkish U.S.- and Australian-government sponsored think tank to purge nearly 200,000 Chinese, Russian and Iranian accounts from its platform. It has also worked hard to remove Venezuelan users critical of U.S. regime change, including large numbers of government members. Meanwhile, despite detailed academic work exposing them, Venezuelan opposition bot networks remain free to promote intervention.

Facebook has also been working hand-in-hand with the Atlantic Council, a NATO think tank, to determine what users and posts are legitimate and what is fake news, effectively giving control over what its 2.4 billion users see in their news feeds to the military organization. Reddit, another huge social media platform, recently appointed a former deputy director at the council to be its head of policy.

Earlier this year, Facebook announced that it was banning all positive appraisals of Qassem Soleimani, the Iranian general and statesman assassinated by the Trump administration. This, it explained, was because Trump had labeled the Iranian Revolutionary Guard Corps (IRGC) a terrorist organization. “We operate under U.S. sanctions laws, including those related to the U.S. government’s designation of the IRGC and its leadership,” it said in a statement. This is particularly worrying, as Soleimani was the country’s most popular public figure, with over 80 percent of Iranians holding a positive view of him, according to a University of Maryland poll. Therefore, because of the whims of the Trump administration, Facebook began suppressing a majority view shared by Iranians with other Iranians in Farsi across all its platforms, including Instagram. Thus, the line between the state, the military industrial complex, and big media platforms whose job should be to hold them to account has blurred beyond distinction. The incident also once again highlights that big tech monopolies are not public resources, but increasingly tightly controlled American enterprises working in conjunction with Washington.

More worryingly, it is the tech companies themselves who are pushing for this integration. “What Lockheed Martin was to the twentieth century,” wrote Google executives Eric Schmidt and Larry Cohen in their book, The New Digital Age, “technology and cyber-security companies [like Google] will be to the twenty-first.” The book was heartily endorsed by Atlantic Council director Henry Kissinger.

After an online outcry including journalists like Ben Norton directly appealing to administrators, the accounts were reinstated today. However, the weekend’s events are another point of reference in the trend of harassing and suppressing independent, alternative or foreign media that challenges the U.S. state power, an increasingly large part of which is linked to the big online media platforms we rely on for free exchange of ideas, opinions and discourse.

Twitter’s ban hammer and censorship army of flaggers is an attempt to re-tighten state and corporate control over the free flow of information. That’s why it’s no wonder independent media like MintPress News, Kawsachun, and watchdog journalists covering state crimes like Ollie Vargas have been targeted in what appears to be an organized effort to silence and censor dissent. Twitter’s message is very clear: our first amendment is not welcome, as long as it challenges establishment narratives.”