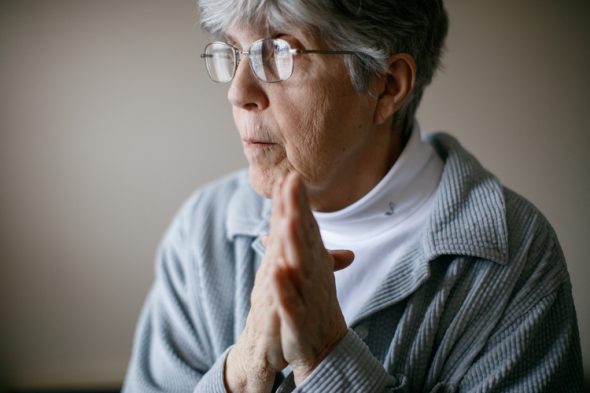 The rolling landscaped grounds and impeccably maintained buildings of the Marywood Campus on East Fulton Street lie just outside of East Grand Rapids. Inside the Dominican Center building on a cold winter morning, the aroma of freshly baked cinnamon rolls floats on the air. Gray-haired Dominican nuns disarmingly smile and nod. Two of them are disarming the world. The world has noticed.

Sister Carol Gilbert, OP and Sister Ardeth Platte, OP, Michigan natives visiting Marywood from Washington DC, presented “A Yes for Humanity: One Step Closer to Nuclear Disarmament” on Tuesday, January 30. They spoke about being part of the International Campaign to Abolish Nuclear Weapons (ICAN) delegation to the United Nations last spring and summer that was instrumental in The UN Treaty on the Prohibition of Nuclear Weapons.

In December, the Norwegian Nobel Committee awarded the 2017 Nobel Peace Prize to ICAN for “its work to draw attention to the catastrophic humanitarian consequences of any use of nuclear weapons and for its ground-breaking efforts to achieve a treaty-based prohibition of such weapons.”

“ICAN consists of more than 468 peace organizations from 101 nations, under the UN cloak of Civil Societies. The UN Treaty on the Prohibition of Nuclear Weapons is leading to their total elimination. Nuclear weapons are the last category of weapons of mass destruction to be prohibited,” says Platte. “A majority of countries of the world are saying we must ban nuclear weapons. Pope Francis says it is not only immoral to use them but immoral to possess them.”

Adopted July 7, 2017, the new treaty, also known as the 7/7/17 Treaty, builds on the 1970 Nuclear Nonproliferation Treaty by totally banning the bomb, making “development, testing, production, stockpiling, stationing, transfer, use and threat of use of nuclear weapons” illegal. 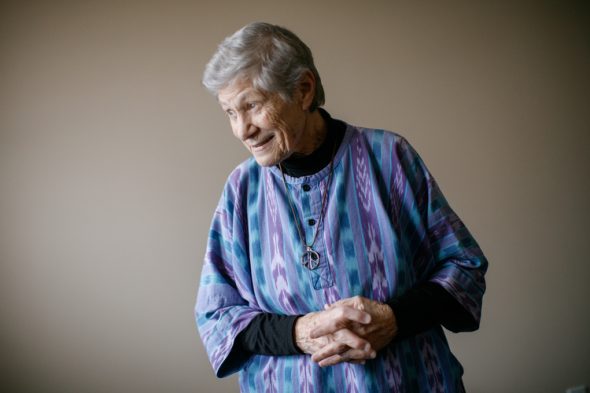 “The treaty really brings out the humanitarian and environmental consequences of war,” Gilbert says. “Doctors played a very important role in passing it. The International Red Cross and Red Crescent played an important role. Speaker after speaker asserted that nothing can save the planet, save the world, if these weapons are ever used.”

For Sisters Gilbert and Platte, being party to the adoption of a groundbreaking UN treaty was simply another step on their journey to disarm the world. Over the past 40-some years, they have done anything and everything they could to ban the bomb. In 2002, they, along with Sr. Jackie Hudson, OP, snuck onto the site of nuclear missile silos in Weld County, Colorado to paint crosses on them with their own blood. They served time in federal prison, where they ministered to their fellow inmates. Gilbert served 33 months and Platte 41 months, a longer sentence as she had been previously incarcerated more times than her two accomplices.

The 7/7/17 Treaty gives the sisters an assured hope that peace is indeed within humanity’s reach—even though US Ambassador to the United Nations, Nikki Haley, boycotted the UN proceedings and threatened NATO allies against signing on. The sisters note that the US took several years before signing the 1970 Nuclear Nonproliferation Treaty and believe the country will eventually sign this one, too.

“It was a wonderful process twofold,” Gilbert says. “One, the number of young people from around the world who are moving this and are going to bring it to completion. Secondly, to be inside the United Nations and be part of these countries who really realize that, there has to be some give and take.”

While some Americans are old enough to remember practicing atomic bomb drills and others have seen a parade of dystopian films depicting a nuclear aftermath, here in the US, most do not share a lived experience of nuclear warfare. This, despite the fact that the US owns 6,800 of the world’s total 14,900 nuclear weapons. (Russia accounts for another 7,000). While claims of deterrence fuel the supposed need for more nuclear weapons, the sisters believe that corporate profit is the true motive for manufacturing more and more.

Survivors of Hiroshima and Nagasaki, as well as inhabitants of the Marshall Islands, have a more urgent message. (Nuclear test bombs were knowingly detonated in populated areas here between 1946 and 1954.) ICAN member, 88-year-old Setsuko Thurlow survived the Hiroshima bombing. A 13-year-old schoolgirl, she dug her way free of rubble and the remains of 351 classmates after the blast. She has worked for nuclear disarmament ever since—and delivered ICAN’s Nobel Peace Prize acceptance speech, which included these words:

“Whenever I remember Hiroshima, the first image that comes to mind is of my four-year-old nephew, Eiji—his little body transformed into an unrecognizable melted chunk of flesh. He kept begging for water in a faint voice until his death released him from agony. To me, he came to represent all the innocent children of the world, threatened as they are at this very moment by nuclear weapons. Every second of every day, nuclear weapons endanger everyone we love and everything we hold dear. We must not tolerate this insanity any longer.”

Gilbert also stresses the huge toll that funding the current military industrial complex takes on Americans ($20 billion a year on nuclear weapons alone). With approximately 75 percent of the federal budget funding military spending, little is left over to fund healthcare, education, environmental protection, or programs to end poverty and homelessness.

The sisters add that as the government prioritizes violence, the trickle-down is violence in communities.

“Remember when Bill Clinton said we need to teach our children to use words rather than weapons? At the same time, the US was bombing Bosnia, Serbia, and the countries surrounding. You teach by what you do, not by what you say. The US solves conflict by bombing people,” Platte says. “I lived in Baltimore for 23 years, in Freddie Gray’s neighborhood. We live in a culture of violence and a culture of death. Every violence is connected. Nuclear weapons are the taproot of all violence.”

Disarming the world is no small task. Yet, these two and their colleagues at ICAN have persuaded to UN to do just that. However, Platte insists that “We’re just two little pieces of sand on the seashore, doing our little part.” Gilbert adds that anyone who has worked for peace, by protesting, through teaching nonviolent conflict management to youngsters, working for restorative justice in their neighborhoods, or simply raising their children to live peacefully, also gets a piece of the Nobel Prize.

Because of the impact that young people from other countries made at the UN, the sisters are currently traveling the US to teach the treaty to Catholic bishops, politicians, grass roots peace organizations, and college students. During a stop at Regis University in Denver, they brought a group of students out to view the nuclear missile site where the three sisters had been arrested in 2002. Most of the students were unaware, and many were angry, that 49 trigger-ready nuclear missiles were housed so close to them. The sisters encouraged the students to write a brief on the treaty, start a petition, get the whole college to sign it, and send it to their senators and Nikki Haley.

“The only thing we can do is hope that another world is possible,” adds Gilbert. “We teach a culture of peace by teaching nonviolence from birth. We teach parents. The video games, movies, you have to eliminate some of that stuff. Nonviolence is a way of life as well as strategy.”

The sisters are also involved in Don’t Bank on the Bomb, a financial divestiture movement modeled successfully in the Netherlands. It encourages people to withdraw their money from banks that invest in corporations manufacturing nuclear weapons, e.g. Boeing, Lockheed Martin, and Raytheon. Meanwhile, Gilbert and Platte are trying to meet with executives from these corporations to persuade them to manufacture products that will serve humanity rather than destroy it.

“Call your congressmen. Attend their town hall meetings and forums. Get your city or county commission to pass a resolution supporting the 7/7/17 Treaty, going on record and divesting of funds,” Gilbert says. “We all know that’s where the real power is, it’s with the money.”

“You also need to show how practices, policies, structures, and systems keep people in complicity with what is not good for humanity and what is not good for the earth. If we really believe in a democracy, we have to develop an awareness of all the ways to bring about peace,” adds Platte. “It’s either the end of nuclear weapons or the end of us all.”