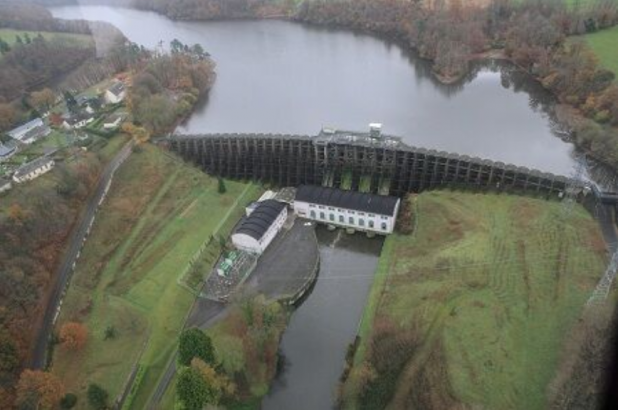 Two French Dams To Be Demolished By 2018

Above Photo: The 35 metre-high Vezins dam in Normandy will be demolished. [Eau Rivieres]

Two large dams on a river in northern France will be demolished after the French government finally signed off on a long-gestating plan to free up the waterway, in a decision welcomed by environmental groups and lauded as “unique in Europe” by Paris.

In early 2018, work will begin on removing the 35 metre-high Vezins and the 15 metre-high ‘La Roche qui boit’ dams from the Sélune river in Normandy, after nearly a century of the barriers producing hydropower for the region.

France has been toying with the idea of demolishing the dams for nearly eight years but last week Ecology Minister Nicolas Hulot announced that the government had given the plan the green light.

“Rehabilitating the ecological continuity of the river shows this ministry’s commitment to reclaiming biodiversity,” Hulot said, adding that these kind of projects should be a priority in the government’s efforts to reduce the effects of climate change.

The government insisted that there is no risk of flooding but that safety assessments would still be carried out during and after the demolition works.

Environmental groups have lauded the decision, as the two dams have long prevented migratory salmon and other species of marine animals from making their way along the waterway.

“Removing these obstacles will help rewild the entire 90kms of the Sélune, allowing the fish to migrate and sediment to flow and rapidly boosting the river’s biodiversity,” explained Roberto Epple, head of the European Rivers Network (ERN).

Sediment transport had rapidly emerged as one of the most problematic aspects of the dams’ existence on the river, as 400,000 cubic metres had built up behind the upper dam as of 2014. This meant the water quality of the reservoir behind the barrier had begun to severely deteriorate.

With the dams’ removal, which is slated to be completed by Autumn 2019 at the earliest, areas along the river can take advantage of increased tourism opportunities, including angling and water-sports. However, green groups also called on Hulot to set a binding timeframe for the work.

Chairman of the North Atlantic Salmon Fund Orri Vigfússon wrote in an open letter that the Sélune could become one of the premier locations in Europe for angling and estimated that 5,000 extra salmon could return to the river once the dams are gone.

Member states are required by the EU’s Water Framework Directive to ensure their waterways are clean and ecologically healthy.

The demolition of the dams will be the largest scale projects of their kind in Europe and WWF Europe’s Martina Mlinaric praised France “for leading the way on dam removal, thereby actively helping rivers and their ecosystems recover from [their] disruptive effects”.

An unexpected effect of dam removal could be a reduction in methane emissions, as the reservoirs behind dams have been found by recent scientific studies to produce more of the greenhouse gas than previously thought.

According to a study produced by BioScience, large-scale hydroelectric dams around the world produce methane thanks to their artificial reservoirs, where rotting vegetation beneath the surface of the water is estimated to emit a billion tonnes of the gas annually.

Methane has a far greater global warming potential than carbon dioxide, although it stays in the atmosphere for fraction of the time. It is emitted from a variety of sources, including the agricultural sector and fossil fuel industries.

If France’s decision to remove its two dams sparks a movement of demolishing old and obsolete dams, then methane reduction efforts in Europe could be boosted, as well as the other environmental bonuses.