While the US drags its heels on peace between North and South Korea, the Koreas are moving forward to create peace on the Korean Peninsula. This tweet includes a video.

Update on 12/12 at 1730 KST: The South Korean Ministry of National Defense (MND) said the North Korean verification team crossed the military demarcation line (MDL) at 1653 local time and returned after completing the on-site verification of guard posts (GPs) on the South Korean side.

North and South Korea began a mutual on-site verification of the trial withdrawal and disarmament of 22 guard posts (GPs) along the demilitarized zone (DMZ) on Wednesday, the ROK Ministry of National Defense (MND) announced the same day.

The verification process follows the completed demolition by November 30 of 10 GPs on either side of the DMZ as part of the two Koreas’ implementation of September’s joint military agreement.

Seoul and Pyongyang originally agreed to destroy a total of 22 GPs from the area, but after withdrawing firearms, equipment, and all personnel decided to leave two standing for historic purposes.

The verification of GPs on the North Korean side was conducted Wednesday morning by assessing the status of firearms, equipment, and personnel withdrawn from the GPs.

In addition, clarification of structural demolition was carried out and the MND said it would further inspect the status of underground facilities and passageways previously connected to the GPs.

The verification of GPs on the South Korean side was scheduled to be taking place on Wednesday afternoon in an identical way, the ROK MND added in the statement. 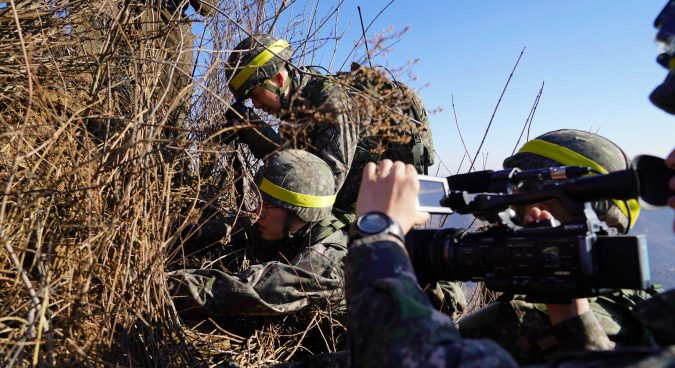 154 staff from the two countries would be taking part in the mission overall, he added.

The ROK MND on Wednesday confirmed that its soldiers had entered the military demarcation line (MDL) through 11 temporary passageways established around 10 days ago.

“Since the division (of Korea), this is the first time that South and North Korean soldiers established a pathway within the demilitarized zone and peacefully moved across the military demarcation line (MDL),” the defense ministry said.

“It is a significant step that clearly demonstrates the willingness of South and North Korean military authorities to implement (their) agreements.”

The ROK MND further explained that Wednesday’s on-site verification would be a “milestone for the alleviation of military tensions and confidence-building on the Korean peninsula.”

The trial withdrawal and demilitarization of the 22 GPs – a preliminary measure to withdrawing all GPs from the DMZ as part of September’s military agreement – is intended to eventually help transform the area into a “peace zone.” 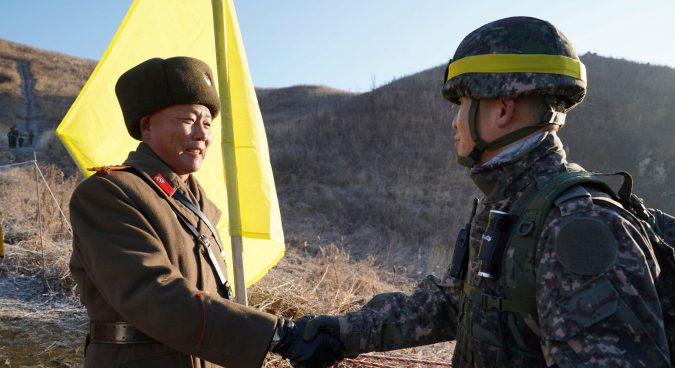 While Seoul and Pyongyang have succeeded in implementing other parts of September’s inter-Korean military agreement – such as suspending military drills and designating a no-fly zone along the MDL – progress has, however, been lacking in many areas.

The recently formed trilateral consultative body — which consists of the two Koreas and United Nations Command (UNC) — has still not finalized fresh guard regulations for overseeing the newly-demilitarized Joint Security Area (JSA), despite the three parties agreeing to do so on November 6.

It is also unclear when the Inter-Korean Joint Military Committee, which the two Koreas agreed to activate following the comprehensive military agreement as well as the Pyongyang Joint Declaration, will be established.

Furthermore, Tuesday saw the ROK MND confirm that the two Koreas continue to be discussing the status of other unresolved military issues, such as the closure of gunports on coastal artilleries and cessation of warning message broadcasts to ships near the disputed western maritime border.

The ROK military on the same day also announced its test of the Boeing P-8A Poseidon military aircraft — which Seoul decided to purchase through a foreign military sale (FMS) program with the U.S. government last June — and relevant ongoing negotiations with Washington.

“We cannot repress our astonishment at the South Korean military’s double-faceted behavior,” Uriminzokkirisaid, denouncing the MND for “sharpening a sword of reinforced military force (that targets)” the same nation.

For its part, North Korean media outlet Arirang-Meari on Wednesday said that the introduction of the new weapons systems are “no different from confrontational and rash behaviors of the conservative regime,” adding such actions “can never be forgiven.”

“If the situation of the Korean Peninsula returns to a grave and catastrophic situation due to imprudent racket for arms buildup, the South Korean authorities should take the full responsibility for it.”