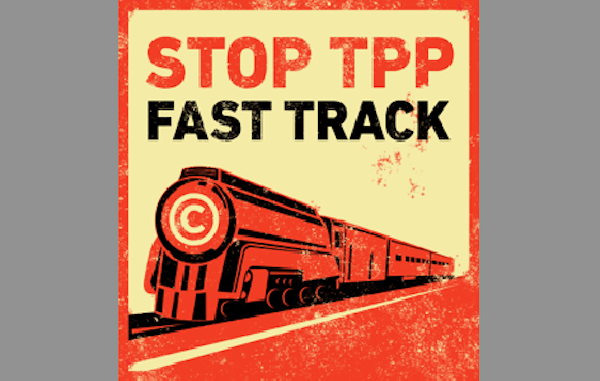 EFF: We Join Dozens of Organizations and Businesses to Protest TPP Copyright Proposals

Today, EFF and its partners in the global Our Fair Deal coalition join together with an even more diverse international network of creators, innovators, start-ups, educators, libraries, archives and users to release two new open letters to negotiators of the Trans-Pacific Partnership (TPP).

The TPP, although characterized as a free trade agreement, is actually far broader in its intended scope. Amongst many changes to which it could require the twelve negotiating countries to agree are a slate of increased rights and privileges for copyright rights holders.

With no official means of participating in the negotiations, the global community of users and innovators who will be affected by these proposed changes have been limited to expressing their concerns through open letters to their political representatives and to the officials negotiating the agreement.

Each of the two open letters released today focuses on a separate element of the heightened copyright regime that the TPP threatens to introduce, and is endorsed by a separate groups of signatories representing those most deeply impacted by the proposed changes in each case.

As the document below describes, countries around the Pacific rim are being pressured to agree to proposed text for the TPP that would require them to adopt a facsimile of the DMCA to regulate the take-down of material hosted online, upon the mere allegation of copyright infringement by a claimed rights-holder. Indeed, industry lobbyists are pushing for an even stricter regime, dubbed “notice and staydown”, that would make it harder than ever before for users and innovators to safely publish creative, transformational content online.

Amongst the 65 high-profile signatories who have endorsed this open letter as of today are Reddit, the Internet Archive, Stack Exchange and Namecheap.

The rash 20 year extension of the term of copyright protection in the United States in 1998 confounded economists, and frustrated librarians, archivists and consumers, who were consequently starved of new public domain works until 2019. Now the USA intends to compound its error by extending it to all of the other TPP negotiating countries—or at least, those that haven’t already yielded to bilateral pressure to extend their copyright terms. As the letter below explains, this would be a senseless assault on the public domain and on those libraries, authors, educators, users and others who depend upon it.

The letter on copyright term extension has been endorsed by 35 organizations so far, including Creative Commons, the Wikimedia Foundation, Public Knowledge and the International Federation of Library Associations and Institutions (IFLA).

Although the letters have been presented to TPP negotiators today, they will remain open for further signatories to express their support, and may be presented again in future rounds. Interested organizations can express their interest in endorsing the open letters on copyright term extension and intermediary liability using the links given here.

For individuals who are not affiliated with a company or organization, we encourage them instead to take action through the Our Fair Deal coalition’s petition (can we take it to 20,000 signatories by this weekend?), and for those who are American citizens, through EFF’s action to oppose fast-track authority.