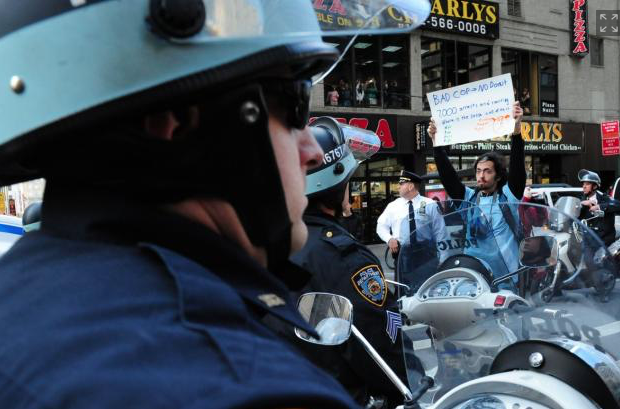 Two Occupy Wall Street protesters who gave the middle finger to NYPD cops were awarded $52,000 after their lawsuit against the city claimed the cops infringed on their First Amendment rights.

A pair of Occupy Wall Street jerks who sued the city after getting arrested for flipping off NYPD cops are a little closer to joining the one-percenters.

The city has agreed to pay $52,500 to Nicholas Thommen and Channing Creager who put the First Amendment to the test so they could exercise their Constitutional right to be obnoxious.

Thommen, 21, and Creager, 26, will split the payout evenly, according to court papers.

They were arrested June 27, 2013 for gesturing with their middle finger at Officers Diane Bowman and John Harrigan on a Queens subway train.

The cops charged them with disorderly conduct and also alleged they were shouting “F— these cops” and yelling all police are “f—— rapists,” which Thommen and Creager denied.

The charges were dismissed after the couple stayed out of trouble for six months.

Their suit said the pair had merely “gestured with their middle finger raised, an internationally recognized symbol of dislike and/or displeasure.”

“Our clients are pleased with the city’s acknowledgement of their First Amendment right to express themselves even when those expressions may be considered offensive, controversial, or unpopular,” said their lawyers Jason Leventhal and Edward Donlon in a statement.

A spokesman for the city Law Department said the settlement was in the best interest of the city.