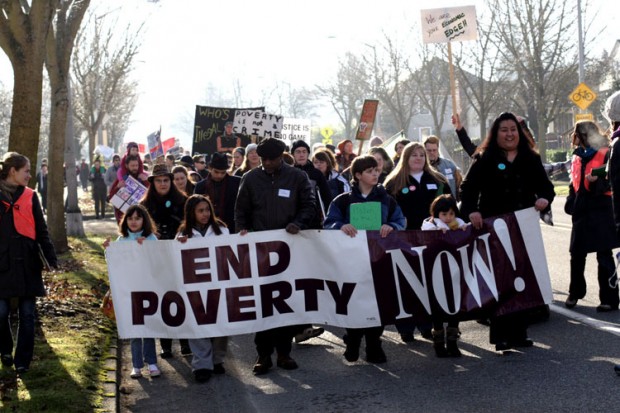 Two Parties, One Game: Obama’s War On The Poor

In the constant con game of American two party politics, the suffering masses are forced to swallow images of the Republicans as reactionary racists and Democrats as the sound defenders of the working class and people of color. The reality is that both parties are completely beholden to the forces of oppression that have ground the working class and people of color to dust for ages in this Country. This tired political charade lets Democrats cast themselves as the safe haven for Black and brown people by doing nothing more than pointing at “those evil Republicans” who want to deport you or send you back to the plantation in shackles.

The truth is that today’s American political establishment on both sides is designed to protect the interests of big corporations, the monied elite, and Wall Street. Democrats, not Republicans passed Bill Clinton’s crime bill, stepping up black mass incarceration to levels even higher than Reagan and Bush before him. Bill Clinton and Democrats repaid the black votes they received by leading the charge to augment drug sentences, disproportionately affecting people of color. Bill Clinton’s Democrats joined Republicans to kick the teeth out of Glass Steagall leading directly to the subprime mortgage crisis that devastated the black family wealth. Democrat Bill Clinton gave us the imaginary wealth of the tech bubble which burst just as he left office. And of course Democrat Bill Clinton gave us “the end of welfare as we know it,” gutting Aid to Families with Dependant Children, and pushing hundreds of thousands of poor mothers and others into the lowest and least secure parts of the workforce, generally without child or elder care, sick pay, or medical coverage.

Barack Obama has continued the Democrats’ tradition of making war on the poor while his cheerleaders scream that it’s those “racist Republicans” that are causing all the damage to those communities disproportionately filled with people of color.

KKhara Sikhan at the World Socialist Website sums it up nicely:

Up to 185,000 families will lose housing assistance by December 2014 as a result of the “Sequester budget cuts,” which slashed the subsidies by $1.7 billion, according to a report issued earlier this month by the Center on Budget and Policy Priorities.

More than 2.1 million low-income households use the Housing Choice Voucher Program (HCVP) to offset the cost of paying for private housing. The program pays a section of rent directly to landlords, and the renters pay the difference. Only one in four households eligible for assistance received vouchers, and wait times for assistance can be months or even years.

The cuts to housing assistance are part of the overall assault on social programs that benefit working people and the poor. This month, benefit payments for the Supplemental Nutrition Assistance Program (SNAP) program were slashed by $5 billion for more than 45 million recipients. The federal Emergency Unemployment Compensation program, which provides extended unemployment benefits beyond the 26-week cutoff for most state unemployment assistance programs, is scheduled to expire in December.

Far from seeking to end these cuts, both the Democrats and Republicans are using them as the baseline for even further attacks on social programs, including drastic cuts to Medicare, Medicaid, and Social Security.

Contrary to what the disinformers at MSNBC will tell you, the sequester was President Obama’s proposal, accompanied by the threat of presidential veto in order to lock Democrats, his own party, into social security and medicare cuts. From this link:

We now have stunning confirmation that Obama is using the sequester “battle” as blackmail to get his Grand Bargain (Grand Betrayal) passed — and that “entitlement” benefit cuts are, and always were, part of the plan. It could not be more clear.

Barack Obama wants to cut entitlements, and he’s using the sequester to do it. This, and no other reason, is why the sequester is happening.

The person who made the statement quoted in my headline — that cutting entitlements is “in the DNA” of the sequester — is Gene Sperling, a “top economic aide” to Barack Obama.

Barack Obama confirmed his intention to cut Social Security and Medicare as far back as 2007.

Austerity then, is being forced upon poor and working class Americans by a Democratic president, enabled by Democratic and “progressive” forces whose only act is to point to the reactionary racism of Republicans. Democrats then, are able to campaign as progressive and govern as the party of neoliberal austerity.

The real political option is to dump this two party con game and return to grass roots movement based politics that was the core of black politics and working class politics since before the Voting Rights Act. Two-party electoral politics in America is about protecting finance capital and its privileges and prerogatives.

It’s time to re-invent a new movement politics, a politics that’s more than pickets and protests, a politics which will disturb the flow of capital and disrupt business as usual. It’s time to leave the two party kabuki game.

Pascal Robert is an Iconoclastic Haitian American Lawyer, Blogger, and Online Activist for Haiti. For years his work appeared under the Blog Thought Merchant: http://thoughtmerchant.wordpress.com/You can also find his work on the Huffington Post here: http://www.huffingtonpost.com/pascal-robert/He can be reached via twitter at https://twitter.com/probert06 @probert06 orthoughtmerchant@gmail.com.