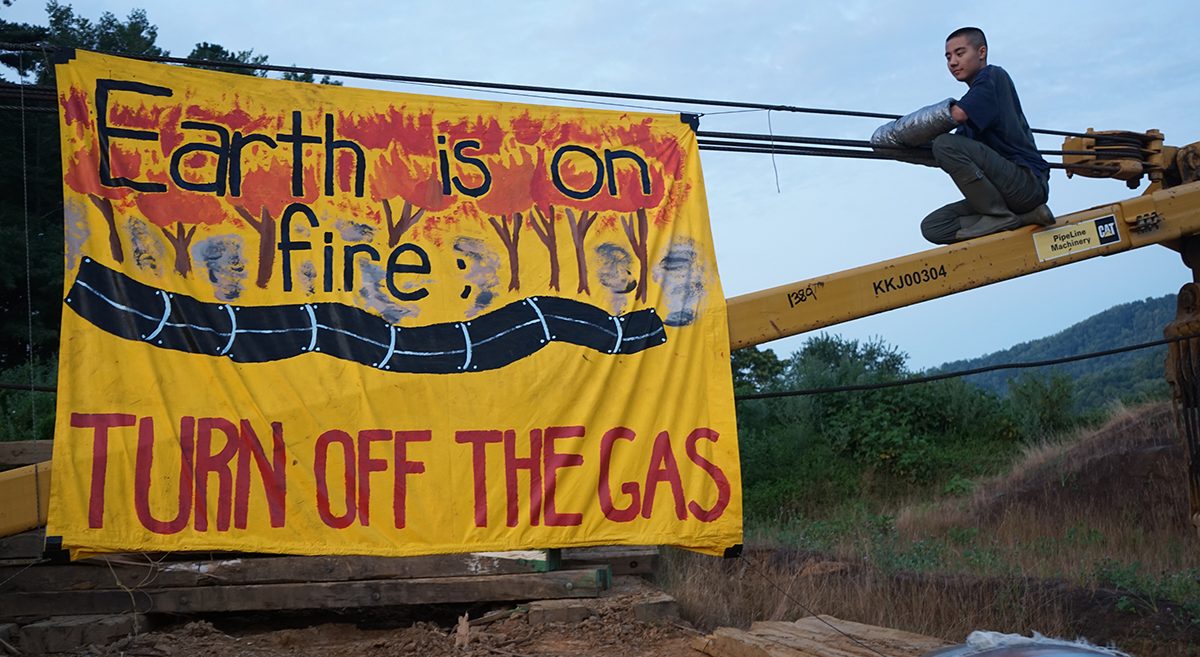 Above photo: From Appalachians Against Pipelines.

Franklin County, VA — At 6 A.M. this morning, two pipeline fighters locked themselves to separate pieces of construction equipment at a Mountain Valley Pipeline site in Franklin County, VA. Banners on site read “EARTH IS ON FIRE, TURN OFF THE GAS” and “¡SOLIDARIDAD CON PUERTO RICO!”. Work at the site was prevented for 6.5 hours before the protesters were extracted from their blockade by law enforcement around 12:30 P.M. As of 5 P.M. the protesters had not been arraigned, no charges had been released, no bail had been set. 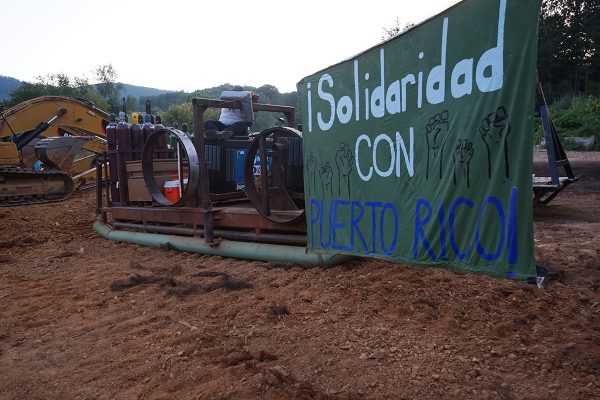 When asked why he’s taking action today, Cricket (the person locked to the side boom) said: “Lots of things bring us here, I think. Speaking for myself, I’m currently going to school for integrated science education, which means my long term life plan is to become a science teacher. […] Unless we can stop climate chaos, the students I teach won’t have a planet to learn about, or potable water to drink, or even clean air to breathe, for that matter. So no matter what happens after this, I know I’m doing something that I will be proud to explain for the rest of my life.”

Clove, the person locked to a welding sled this morning, stated the following in reference to one of the banners on site: “One indicator of climate destabilization is the increasing severity of hurricanes. In 2017, Hurricane Maria devastated the island of Puerto Rico as well as other surrounding places. […] Since that hurricane, we’ve seen communities take care of each other in ways the government won’t, and now more than ever we’re seeing people take that power and use it to reject that government all together. We want to show love and support to the folks in Puerto Rico that are fighting for autonomy in their lives after a disaster, on a planet that’s only going to have more disasters in the near future.”

Chris Risch, a longtime SWVA resident who is a sustainable farmer and filmmaker, stated the following in support of today’s action: “This is not a fight. This is a resistance to the force of greed. If our country’s political powers turn a blind eye to the kind of exploitation and destruction embodied by the Mountain Valley Pipeline, it is the duty of its citizens to take matters into their own hands — not out of volition, but out of necessity.” 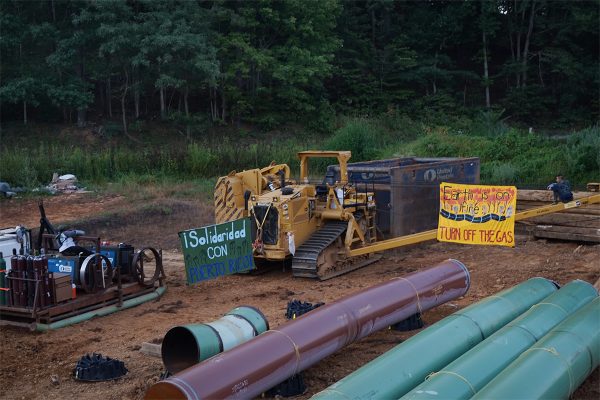 The Mountain Valley Pipeline is a 42-inch diameter, 300-plus mile, fracked gas pipeline that runs from northern West Virginia to southern Virginia, with a proposed 70-mile extension into North Carolina. The Mountain Valley Pipeline contributes to climate change, increases demand for natural gas (and as a result, fracking), and is entrenched in corrupt political processes. It endangers water, ecosystems, and communities along its route. Early this month, 1 person died and several others were injured after an explosion of a 30-inch natural gas pipeline owned by Enbridge in rural Kentucky. The Mountain Valley Pipeline poses similar threats to those along its route, in addition to the risks posed by the construction process itself. From flipped excavators, to sinkholes opening up, to landslides, MVP continues to risk the lives of protesters, residents along the route, and even its own workers.

Meanwhile, the ongoing tree sit blockade near Elliston, VA — the Yellow Finch blockade — is currently in its 345th day of blocking MVP’s path. Earlier this month, a federal judge denied MVP’s request for an injunction against the tree sitters. The court case for a similar request for injunction filed last week in Virginia state court is ongoing. MVP currently lacks permission to cross many water bodies on the route, and has been forced to explore alternate approaches in crossing through the Jefferson National Forest. In June 2019, builders admitted that the project’s budget has ballooned to $5 billion and that the completion date has been delayed by at least 1.5 years (and counting).