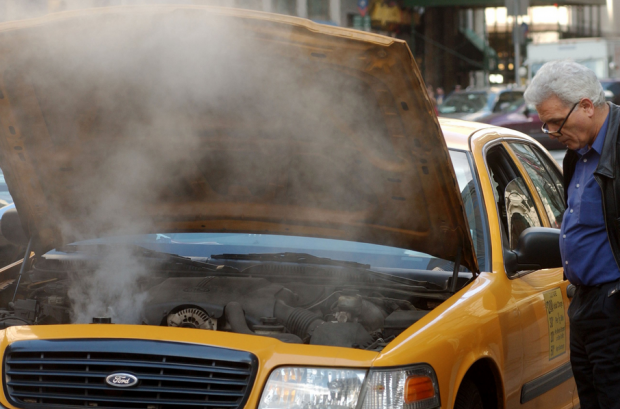 Your 17-year-old son comes home from his part-time job and says the family car he uses to get to work developed a “clunking” sound underneath the vehicle when he hits the gas pedal.

Turns out he hit a pothole, and the left front tire is now damaged beyond repair. OF course, the tire rim may be damaged, too. Total cost of repair: $500.

Or, you play flag football on Sunday afternoons, and you break your tibia diving for the end zone. A trip to the hospital emergency room sets the damaged leg, but not before emergency room fees hit $1,000 — and your health insurance plan’s deductible won’t cover the charge.

If you’re among the 63% of adult Americans who don’t have the savings to pay for a $500 car repair, or a $1,000 emergency room visit, you’ve got a problem — and a bill you can’t afford to pay because of low savings.

As usual, the numbers tell the tale.

Only 37% of U.S. adults have enough savings to pay for these unexpected expenses, according to a new report from Bankrate.com. Of those Americans who could not pay off that $500 or $1,000 bill, 23% would reduce their spending on other things to make ends meet, 15% would use credit cards and another 15% would borrow from family or friends, the report states.

“More than four in ten Americans either experienced a major unexpected expense over the past 12 months or had an immediate family member who did,” says Sheyna Steiner, Bankrate.com’sior investing analyst. “This proves that an emergency savings cushion is more than just a personal finance cliché, yet most Americans are ill—prepared for life’s inevitable curveballs.”

Yet most financial professionals aren’t exactly floored when they hear so many Americans are cash-starved these days, and can’t handle unexpected, budget-busting bills.

“I hear this from folks in all income brackets,” says Holly Wolf, chief marketing officer at Conestoga Bank in Chester Springs, Pa.

She has a couple theories about why this happens.

First, way too many people don’t set a budget.

“They have no idea how much is coming in and going out,” Wolf says. “As long as they can make the bills today , they feel like they are doing O.K. Facing your budget reality is very tough to do, though. It’s much like seeing the scale when you are overweight.”

Then, there’s the “wants versus needs” issue. “Does everyone in your family need a smartphone?” Wolf adds. “Do you really need to go out to eat? Folks don’t make saving a priority and are unwilling to give up anything to get it.”

An over-reliance on credit cards is eating into consumer cash flow, too.

“We’re definitely seeing more of that,” notes Adam Woodworth, executive director at the Children’s Museum in Oak Lawn, Ill. “Over the past six years, we’ve seen the number of credit card transactions increase while the number of cash transactions decrease for general admission.”

“I’m guilty of this, too,” Woodworth adds. “But the money is in my bank account, and the credit card gets paid off each month. For me, it’s just more convenient.”

Other Main Street Americans say the bigger picture reveals a darker viewpoint from consumers on money, savings and debt.

“Because of my job, I see all walks of life and interact with tons of folks who are either very well established or just trying to make it in some industry,” says Richard Storm, a New York City-based photographer. “I think the main reason folks unfortunately can’t afford things sometimes is because we are for the most part a debt driven society. From the low man on the totem pole to the top of the ladder it seems to me everyone wants to keep up with the Joneses in their own way.”

Storm says he knows “tons of people” who work a regular nine-to-five job but take solace in the fact that they can buy a new TV or tablet at their next paycheck. “That means folks are getting carried away with what they want instead of maybe putting a bit away for a rainy day,” he says.

If that sounds like you, take some action steps now to ensure you won’t have bigger financial problems later with an unforeseen expense. Job number one is to track expenses.

“It’s very important to understand and be familiar with your personal spending habits and patterns,” says Caira Dean, a certified budget counselor with Transformance, a Dallas-based consumer credit counseling service. “If you’re unsure where your money goes, simply write it down. Consider writing each item with the costs on a sheet of paper everywhere you spend for an entire month. Write from the smallest priced item to the largest priced item. That will help you identify areas of spending that could be reduced or increased in order to help strategize your spending plan and help you to reach your personal financial goals.”

“Allocate every dollar to a specific category in your spending plan, which does include having a savings category and a ‘blow’ category if necessary,” Dean adds. “Then, build a savings habit even if you’re only setting aside a small savings amount each month. When the budget is tight you would be glad that you saved even $5 or $10 here or there to prepare for any unexpected expenses that might arise.”

“The idea is to develop the habit of saving even if you start small,” she adds.

It’s no fun to be blindsided by a $500 auto repair bill or a $1,000 charge from a hospital emergency room visit. But it’s really an uphill climb if you can’t afford to pay the bill. So get going now, to alleviate a lot of financial pain later.>