Above photo: A group of randomly selected Finns said knowing they were being paid the universal basic income relieved some of the stress in their lives. Photo: 123RF.

The basic income recipients were more satisfied with their lives and experienced less mental strain than the control group. They also had a more positive perception of their economic welfare. The interpretation of the employment effects of the experiment is complicated by the introduction of the activation model in 2018. 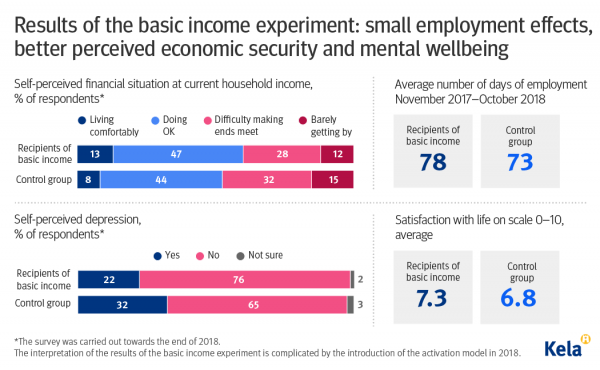 A two-year basic income experiment was carried out in Finland in 2017-2018. The evaluation study is now available. The register data on employment now cover both years of the experiment and a more thorough analysis has been made of the results of the survey. In addition, the interview-based survey of basic income recipients complements the overall picture.

However, the interpretation of the effects of the experiment is made more complicated by the introduction of the activation model at the beginning of 2018, which meant more stringent entitlement criteria for unemployment benefits asymmetrically in both groups.

– The effects of the second year of the experiment cannot be separated from the effects of the activation model, says Kari Hämäläinen, Chief Researcher at the VATT Institute for Economic Research.

– All in all, the employment effects were small. This indicates that for some persons who receive unemployment benefits from Kela the problems related to finding employment are not related to bureaucracy or to financial incentives, says Hämäläinen.

The effects of the basic income experiment on wellbeing were studied through a survey which was done by phone just before the experiment ended.

Survey respondents who received a basic income described their wellbeing more positively than respondents in the control group. They were more satisfied with their lives and experienced less mental strain, depression, sadness and loneliness. They also had a more positive perception of their cognitive abilities, i.e. memory, learning and ability to concentrate.

– In addition, the respondents who received a basic income had a more positive perception of their income and economic wellbeing than the control group. They were more likely to find that their financial situation is manageable and that they are protected financially, says Minna Ylikännö, Head of the Research Team at Kela (the Social Insurance Institution of Finland).

The basic income recipients trusted other people and the institutions in society to a larger extent and were more confident in their own future and their ability to influence things than the control group. This may be due to the basic income being unconditional, which in previous studies has been seen to increase people’s trust in the system.

– On the basis of the study, it is not possible to say with certainty that the better wellbeing of the test group was due specifically to receipt of a basic income. Then again, regional and local basic income experiments in other countries have also shown similar results of improved wellbeing, says Ylikännö.

The response rate for the survey was 23% (31% for the basic income recipients and 20% for the control group), which is typical for surveys.

The interviews highlight the individuality of starting points and effects

For some, the experiment offered new opportunities of participating in society for instance through voluntary work or informal care. Many interviewees said that the basic income strengthened the feeling of autonomy. Even though the descriptions of the effects of the basic income were on the whole fairly positive, for some the experiment had also created pressure to find a job and difficulties with the ability to cope.

– The basic income seems to have increased activity of different kinds among those who were active already earlier. Then again, for those who were in a challenging life situation before the experiment, the basic income does not seem to have solved their problems, says Helena Blomberg-Kroll, professor at the University of Helsinki.

The first nationwide, statutory and randomised basic income experiment in the world

– The implementation of the experiment was successful and it provided new information that would not have been available without the experiment. It also showed that in Finland the arranging of extensive social experiments is possible from a legislative viewpoint, says Olli Kangas, Programme Leader at the Strategic Research Council, Academy of Finland.

The experiment was begun on 1 January 2017 and ended on 31 December 2018. The decision to conduct the experiment was made by the Government of the then Prime Minister Juha Sipilä. The aim was to study how it would be possible to reshape the Finnish social security system so that it better meets the challenges posed by changes in working life. The experiment was implemented by Kela (the Social Insurance Institution of Finland).

The results of the basic income experiment will be published in an online broadcast on 6 May at 13.00-15.00 (Finnish time). The publication is arranged in cooperation between Kela, the Ministry of Social Affairs and Health and The University of Helsinki’s Think Corner. You can watch the online broadcast and the recording of the broadcast here.