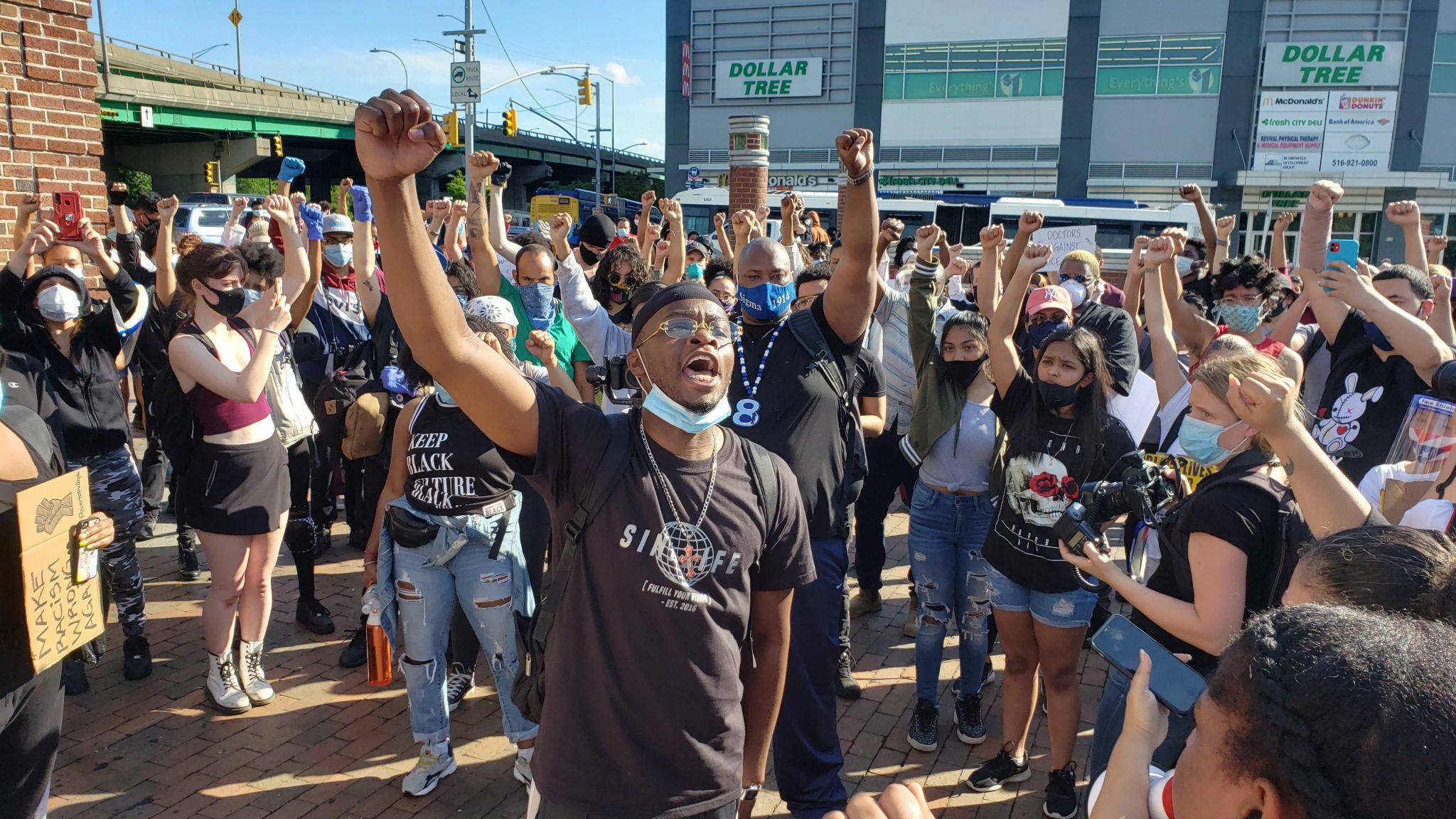 Two Years Since George Floyd’s Death, Has Anything Changed In The US?

Above Photo: Protestors in the Bronx, NY. Party for Socialism and Liberation.

The gains and setbacks in the movement for Black lives prove how racism is woven deeply into the fabric of capitalism and US society.

Police officer Derek Chauvin killed George Floyd on May 25, 2020, shocking the consciousness of the entire United States. On May 25 of this year, President Joe Biden announced that he will instate an executive order which is a watered-down version of a police reform proposal that previously failed to pass in the Senate. The failed proposal would have altered “qualified immunity”, a doctrine that makes it difficult to sue government officials, including police. The proposal would have kept the doctrine intact for individual officers, but made it easier for police brutality victims to sue officers or municipalities.

This new executive order would merely create a national registry of officers fired for misconduct, in addition to directing federal agencies to revise use-of-force policies, encouraging state and local police to tighten restrictions on chokeholds and no-knock warrants, restrict the transfer of most military equipment to law enforcement agencies, as reported by the New York Times.

The real concern for activists and those who are targeted by police is primarily the police who are still on the job, and may have several complaints against them for violence already. This was the case with Chauvin, who had used excessive force in six previous arrests. Even of the officers who are fired for misconduct, of which there are few compared to the massive number of victims killed by police, nearly 25% are reinstated because of police union-mandated appeals.

Government officials are not responding with the seriousness compared to the intensity of the crisis of police violence that plagues the United States. This is especially true in light of the radical demands generated by the mass movement which followed the death of George Floyd. Some of the most popular were: end police brutality, jail killer cops, and defund the police. This movement shifted the mainstream language on police violence, which had originally placed the blame on individual cops or “bad apples”, to include more discussion of systemic, institutionalized racism.

“Even though you had the largest social uprising that had ever hit the country, in terms of numbers of people actually hitting the streets, you’ve seen no substantive reforms to address the issues, even in a small way regarding racism and bias in policing,” socialist organizer and journalist Eugene Puryear told Peoples Dispatch, speaking of the 2020 anti-racist uprising. Polls estimate that between 15 and 26 million were out on the streets, making these uprisings the largest protests in US history.

The movement shouted “Jail killer cops!” and “End police brutality!” in the streets, but the state has fallen short on delivering these demands.

There was no reduction in police killings in the US from 2020 to 2021, according to data compiled by the website Mapping Police Violence. Police killed 1,145 people in 2021, 12 more than in 2020, and 16 more Black people specifically.

2021 was marked by landmark trials that broke the paradigm of convictions for vigilante and police killings of Black people. The most notable example is Derek Chauvin’s guilty-on-all-counts verdict, for which he was sentenced to a historic 22.5 years.

However, there was also no notable spike in the number of convictions and sentencing in general of police officers, although there is some evidence that public outrage does generate results. Of the 1,145 police killings in 2021, only two have resulted in convictions thus far. One of them is the trial of Kim Potter, whose murder of Daunte Wright made headlines when she gunned down the 20-year-old Black father 10 miles from where Chauvin was standing trial at the time.

A notable setback, however, was the not-guilty verdict for the killer of Breonna Taylor, Brett Hankinson, who, alongside other officers, killed Breonna by firing 16 rounds into Taylor’s apartment during a raid while she was sleeping. Hankinson was never even on trial for the killing of Taylor. In fact, the officers responsible have faced no criminal charges at all for her death. Hankinson was on trial for “wanton reckless endangerment” for firing ten shots through a wall into Taylor’s neighbor’s apartment. Even for this, he was found not-guilty on May 3 of this year. “Thank you Jesus!” tweeted John Mattingly, another officer involved in Taylor’s murder.

Were The Police Ever Defunded?

“One of the things that was the most notable in the context of the George Floyd uprising, and the rise of the slogan ‘defund the police’, it went beyond simply the issue of police brutality,” Puryear told Peoples Dispatch. “It was connecting at a deeper level, the reality of white supremacy in causing oppression for Black Americans across almost every single social sphere that exists, policing being one of the most egregious examples of this racism and this discrimination and the xenophobia that’s directed towards Black Americans.”

“Defund the police” was indeed a radical slogan in a country in which police budgets as a share of general city expenditures have only increased since the 1970s. These budgets followed the trend of the rise in incarceration, both of which were part of the “war on crime” era of racist policing and incarceration that served to suppress 1960s and 70s Black rebellion.

As a result, police budgets in the United States are some of the largest in the world, especially compared to underfunded schools and social services. According to a study, schools in the US are short of funding by nearly $150 billion every year. Meanwhile, in a city like New York, the annual police budget is over $10 billion. If the New York Police Department (NYPD) were a military, it would be one of the world’s most well-funded.

Did city governments ever respond to demands and defund the police? Generally, the answer is no. While the 50 largest cities reduced their police budgets by 5.2% in aggregate, police spending as a share of general spending rose slightly from 13.6% to 13.7%. Many of the budget reductions that did occur were a result of larger pandemic cuts, in which other parts of the city budgets were also reduced. 26 out of 50 major cities actually increased their police budgets.

These numbers are the material reality, but in the full swing of the uprisings, city governments were making lofty promises to their people, who were marching outraged in the streets. In June of 2020, a veto-proof majority of city council members in Minneapolis, where George Floyd was killed, promised to dismantle the police entirely. But when it came time to deliver on these demands, city council members backtracked, claiming that the pledge was “in spirit” or “up to interpretation”. In the end, the city did not dismantle their police force. However, they did end up reducing the police department’s ability to spend overtime and began sending mental health and medical professionals instead of police to respond to emergencies. Activists also won a $8 million cut from the city’s police budget.

Some city officials resorted to blatant deception, making it seem as if activists won demands when in reality, little had changed. In New York, for example, the mayor pledged to move $1 billion out of the massive NYPD budget. But even at the time of this pledge, activists and progressives were calling out the mayor for “just moving money around”. “Defunding police means defunding police,” said Representative Alexandria Ocasio-Cortez. “It does not mean budget tricks or funny math.” As described by a report authored by Andrea J. Ritchie and published by Interrupting Criminalization, the mayor claimed to have cut $300 million from the NYPD budget by moving police officers stations in schools out of the NYPD budget and into the Department of Education Budget. This was never a demand of the movement against police brutality, which has always agitated for “police free schools”. In the end, however, this $300 million was never even cut from the NYPD budget, while the Department of Education budget was actually defunded by over $780 million.

Were There Any Victories?

Although the post-2020 realities are disappointing for many, there were some notable victories. Some cities did in fact make major cuts, such as Austin, which cut a third of its police budget. And the uprisings did in fact halt the trend of ever-increasing police budgets that had existed since the “war on crime” began. Budgets did decrease across major cities, however minimally.

According to Ritchie’s report, organizers shifted $840 million countrywide away from police forces, and secured $160 million for community services. Activists moved police out of schools, where they often generate more violence than they prevent. 25 cities canceled contracts with police departments operating in schools, saving a total of $35 million. Activists have also begun to demilitarize the highly militarized US police forces, winning bans on chemical/military-grade weapons in 6 cities and facial recognition in 4 cities.

But the key victory of 2020, argues Puryear, was the changing of mass consciousness. “The very fact that you could have a situation where a majority of people are recognizing the fact that there is racism, the fact that there is tremendous discrimination against black people in policing, in prisons and in the criminal legal system, and not have any change whatsoever, shows how intrinsic racism is to capitalism in the US context,” Puryear said.

He continued, “[Those in power] actually cannot afford to eliminate these clear and obvious biases that exist. It’s essential to the social control of the black community, as a part of the broader efforts to super exploit black people, as it has been since the first slaves arrived here as a central pillar of the capitalist system.

“It exposed once again the deep relationship between capitalism and racism, and the inability to overcome racism without overcoming capitalism. Because it isn’t just incidental, it isn’t a few bad apples, it isn’t just the attitudes of certain people, but it’s structural and it’s systemic in a way that can’t be changed by good intentions.”