Washington, D.C. — In early April, a coalition of anti-war activists called for a civilian defense of the Embassy of the Bolivarian Republic of Venezuela, located in the Georgetown neighborhood of Washington, D.C. This call was made in response to the attempted coup against Venezuela’s democratically elected president, Nicolás Maduro.

Since late February, the U.S. and its allies have attempted to install a right-wing puppet government in Venezuela, headed by pretender Juan Guiadó. The Trump administration had supported the takeover of several Venezuelan diplomatic buildings in the U.S. by pro-Guaidó forces. Consequently, a real fear developed that U.S. law enforcement and right-wing Venezuelan elements would move to seize the Embassy of Venezuela, in clear violation of international law.

I had previously been at the embassy on Feb. 23 at a “Hands Off Venezuela” demonstration. On April 11, I stepped foot into the embassy in response to the call for peaceful embassy defense.

The scene was not particularly romantic. By this time, the vast majority of the embassy’s staff had been evacuated back to Venezuela. Only one staff member and a few progressive activists remained.

The embassy is a sprawling and impressive facility. There are dozens of offices, a full fitness facility, multiple conference rooms and a large library. Even more than its amenities, though, the embassy has a unique historical and cultural voice. It expresses this voice through an impressive display of artwork, political symbols and baseball memorabilia. The embassy demonstrates the Venezuelan people’s pride in their nation’s history: from the vision of liberation hero Simón Bolívar, to the bat of baseball legend Magglio Ordoñez.

It was evident to me then that the embassy is much more than a large building on a side street in Georgetown. The embassy is a testament to the pride and resiliency of a people’s movement for freedom and democracy.

However, on this day, the impressive and once bustling complex was quiet and sparsely occupied. The task at hand may not have been particularly exciting, but it was crucial. That evening, 10 activists stood out in the rain making their voices heard. We were small in numbers, but powerful in message: any attempt by the United States to undermine the sovereignty of Bolivarian Venezuela must be met with the fiercest resistance.

Starting on that day, the defense was known as the “Embassy Protection Collective.” Thankfully, April 11 was just the beginning of a movement to defend the embassy and to stand in solidarity with the democratically elected government of Venezuela. 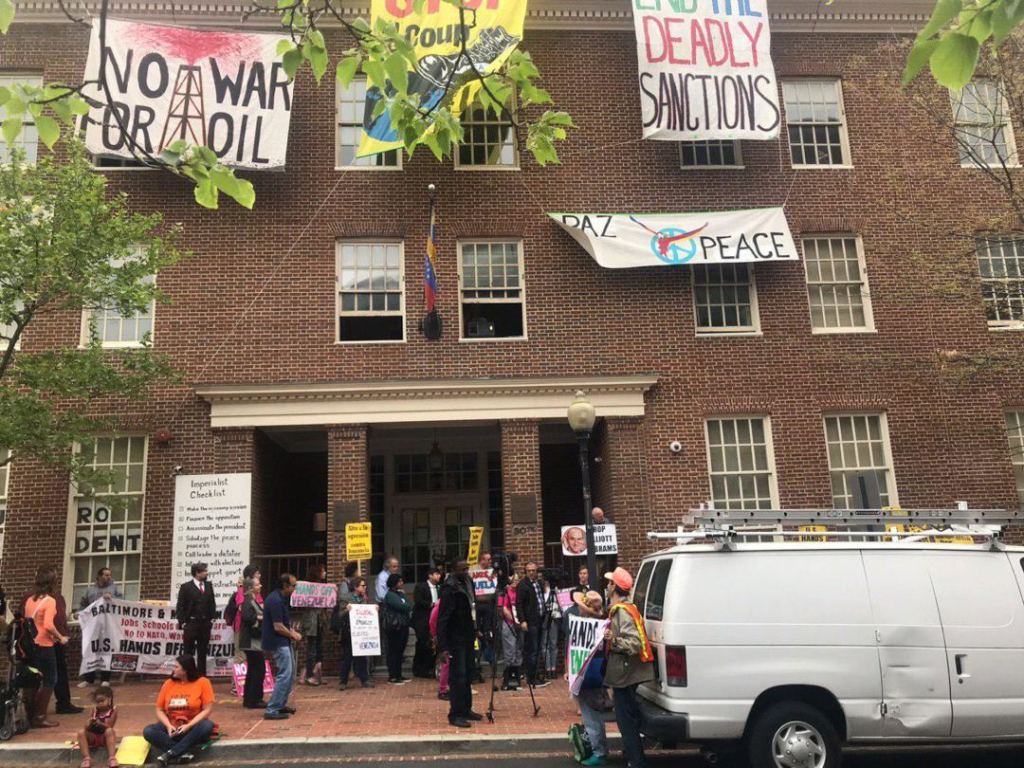 As danger grows, so does defense

I returned to the embassy on April 15 to attend a political talk and again spend the night. The atmosphere was encouraging. The number of activists had swelled. There were more lights on, more rooms occupied, and more voices echoing through the halls. The efforts of activists were paying off.

That evening, Pan-African Community Action gave a brilliant presentation on the oppressive U.S. military occupation throughout the continent of Africa. Prior to this presentation and discussion, a Palestinian-Egyptian family gave a musical performance. The family sang of pain, resilience and solidarity. In between songs, the musicians spoke of the connection they felt with the Venezuelan struggle against U.S. interference.

To finish their performance, they played a song that told the story of a family in the West Bank with seven children. The song told a tale of the seven children fighting for Palestinian liberation against Israeli occupation. Each child had a role in fighting for freedom. The performance of this song was not a coincidence. Whether protesting against Israeli apartheid or preventing the seizure of the Embassy of Venezuela, we all have a role to play.

On the morning of April 25, I again returned to the Venezuelan Embassy. By this time, the building was brimming with energy. Every room was filled with activists making plans. Dozens of dedicated people had stayed there the night before. Furthermore, a sizable crowd was gathering outside the embassy to demonstrate against any attempted U.S. government takeover.

Several organizers with Struggle for Socialism-La Lucha por Socialismo newspaper joined a proud coalition of organizations that stood with the people of Venezuela, President Maduro and the ongoing Bolivarian revolutionary process. It included activists and organizations from all over the U.S. and the world, including Code Pink, Popular Resistance and the ANSWER coalition. Everyone in the crowd got a chance to speak, declaring their reasons for standing in defense of Venezuela and its people. 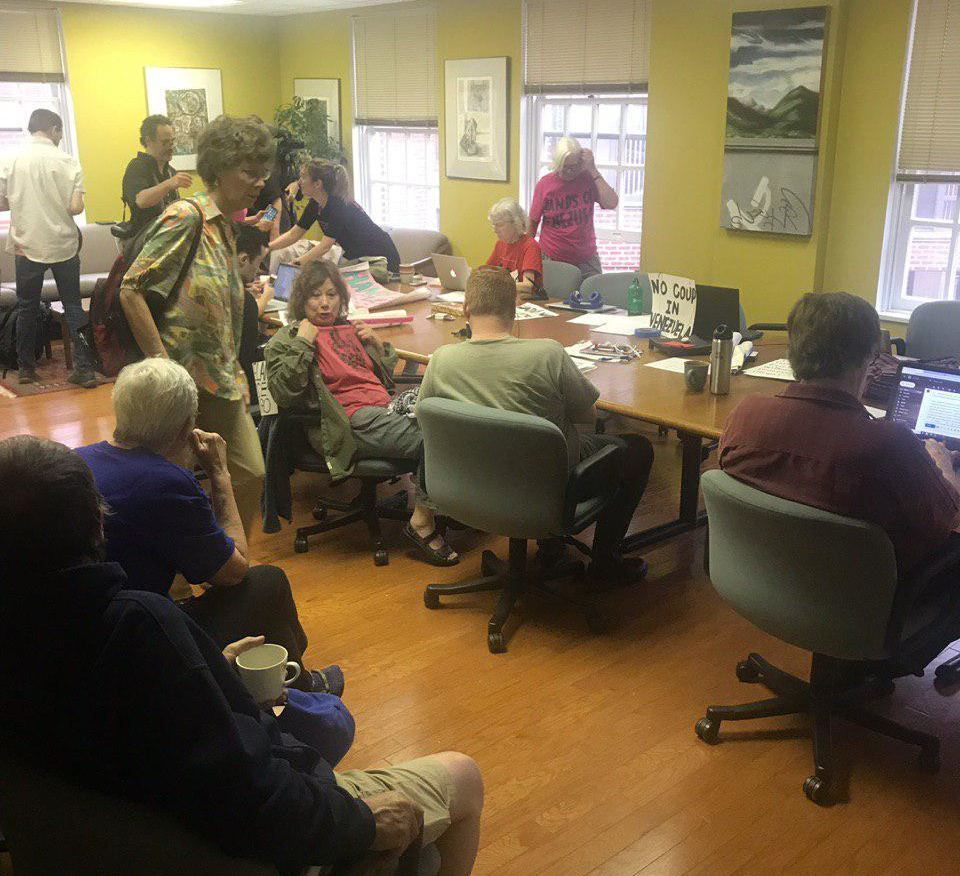 As I write this, the embassy is still being defended. War criminal Elliott Abrams, Trump’s “special envoy for Venezuela,” declared this defense illegal. Secret Service and D.C. metro police officers circle the facility. Yet the anti-coup activists at the embassy remain steadfast.

Contrary to the narrative being pushed in the corporate media, totalitarianism and dictatorship do not plague Venezuela. The only plague harming Venezuela is that of U.S. economic sanctions and illegitimate, unelected shadow governments representing the wealthy. Since the election of Hugo Chávez, Venezuela has fought for the highest standard of living for all of its people. This living revolution must continue.

For those reasons, we will continue to stand in defense of the Embassy of the Bolivarian Republic of Venezuela in Washington, D.C. ¡Viva la revolución bolivariana!