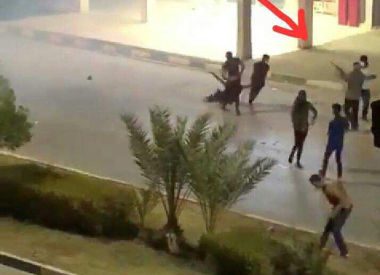 Above Photo: via Sayed Mousavi

In early 2014 we remarked on Color Revolution by Force in Syria and Ukraine:

The aim is “regime change” of legitimate governments by small minorities. Should the “regime” resist to that the alternative of destroying the state and the whole society is also wholeheartedly accepted.

We have since seen similar CIA operations in Venezuela and most recently in Nicaragua. The same concept is used to attack Iran. In December peaceful economic protests were hijacked by violent elements. Last night a similar attempt occurred:

The scene with the “armed bike” in the video attached to the above tweet can be seen better in another video. It shows two “peaceful protesters” on a motorcycle shooting at police with an automatic gun. The shooter is hit and falls off. Another “peaceful protester” picks up the gun and continues shooting. 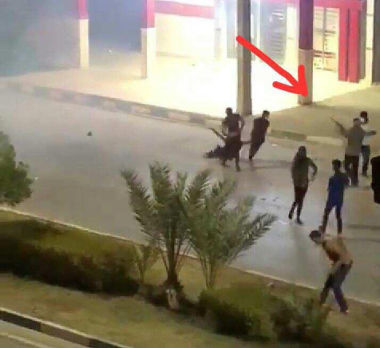 A year ago the CIA created a new mission center to attack Iran:

The Iran Mission Center will bring together analysts, operations personnel and specialists from across the CIA to bring to bear the range of the agency’s capabilities, including covert action.
…
To lead the new group, Mr. Pompeo picked a veteran intelligence officer, Michael D’Andrea, who recently oversaw the agency’s program of lethal drone strikes …
…
Mr. D’Andrea, a former director of the CIA’s Counterterrorism Center, is known among peers as a demanding but effective manager, and a convert to Islam who works long hours. Some U.S. officials have expressed concern over what they perceive as his aggressive stance toward Iran.

The tool the U.S. is using in Iran are operatives of the Mujahedin-e-Khalq (MEK), a terror cult that has been fighting with Saddam’s Iraq against Iran and is despised by the Iranian people. When the U.S. was kicked out of Iraq it transferred the MEK camps from Iraq to Albania where the cult is now training its terrorists.

Yesterday a conference of the National Council of Resistance of Iran (NCRI), a political umbrella controlled by the MEK, was held in Paris. One of the well-paid guest speakers was Donald Trump’s lawyer Rudy Giuliani. He acknowledged U.S. involvement in the protests in Iran:

The MEK is just a front group, trained by Mossad and financed with U.S. and Saudi money. It is not backed by Iranian people. Only half of the attendees of the conference were Iranians at all:

The other half consisted of an assortment of bored-looking Poles, Czechs, Slovakians, Germans and Syrians who responded to a Facebook campaign promising travel, food and accommodation to Paris for a mere €25.

These “color revolution by force” regime change protests are only one of the tools the U.S. is using to destroy Iran.

Trump wants to end all oil exports from Iran to starve the country of foreign currencies. Iran’s biggest customers are Europe, India and China. The big Europe oil companies have already folded under Trump’s pressure, India followed and China has still to decide if it wants to take a (costly) stand. Trump is pressing Saudi Arabia to increase its oil supplies to replace the Iranian oil that can no longer reach the world market.

Making Iranians poorer is thought to lead to an uprising and regime change. But it is doubtful that such will work. The identity of the Islamic Republic is quite strong. It is more likely that the Iranian people will pull together and accept the hardship while asymmetric Iranian operations slowly destroy the U.S.’s policies. Saudi oil ports are quite vulnerable targets …

Within the Trump administration Secretary of State Pompeo and National Security Advisor John Bolton are the biggest proponents of regime change in Tehran:

Bolton views the demonstrations that have broken out in Iran in recent months over the state of the country’s economy as an indication of the regime’s weakness. He has told Trump that increased U.S. pressure could lead to the regime’s collapse.

One person who recently spoke with senior White House officials on the subject summarized Bolton view in the words: “One little kick and they’re done.”

Secretary of Defense Mattis is said to be opposed to regime change in Iran. He fears that such an effort might lead to a larger Middle East war. Trump will likely fire him soon. Sheldon Adelson, the Zionist billionaire who financed Trump’s campaign, paid Bolton and supports Netanyahoo, will have Trump ears. He demands regime change in Iran no matter what.

Regime change in Iran is not just a Trump administration project. The support for the MEK nutters is bipartisan. Several Democrats, including Nancy Pelosi, also spoke at the MEK conference in Paris. The neo-conservative lunatics are established in both parties. Here is Obama’s ambassador to Russia who tried and failed to implement regime change there:

Michael McFaul @McFaul – 18:21 UTC – 30 Jun 2018
A democratic Iran not only would free Iranians from repressive theocracy but produce closer ties between our two countries; real security, economic, and moral benefits for both Iranians and Americans.

To which the father of the neocons responded:

Bill Kristol @BillKristol – 18:29 UTC – 30 Jun 2018
Bill Kristol Retweeted Michael McFaul
Very true. And great to see a bipartisan consensus for regime change in Iran! (It would be happily ironic if, totally inadvertently, tough sanctions followed by the JCPOA followed by withdrawal from the deal caused so much whiplash that the regime crumbled.)

Surely, the U.S. will be welcome in Tehran with candy and flowers (not). Such neo-conservative “moral benefit” nonsense has already led to the disaster of the war on Iraq. Iran is several times larger. It has a quite modern economy, effective proxy forces and very significant allies. Any attempt to defeat it militarily will be a hopeless endeavor.

The U.S. has only weak allies in the Middle East. Should a conflict with Iran become hot it would have its hands full with trying to save them from falling apart.

For now we can expect more protests in Iran that will be hijacked in an attempt to create a “revolution”. There will be U.S. directed proxy attacks by Kurdish and Baluchi forces on iran’s borders. The economic pressure within Iran will increase further.

But all these efforts are likely to fail. Since its Islamic revolution in 1979 every U.S. attempt to damage Iran or its allies has led to the opposite effect. Every time Iran emerged stronger than before. It is likely that the current attempt will have a similar result.