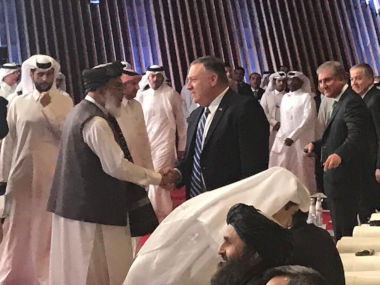 U.S. Breaks Its Just Signed Agreement With The Taliban

Above Photo: From Moonofalabama.org

U.S. Breaks Its Just Signed Agreement With The Taliban

Today a U.S. fighter jet bombed a Taliban unit which was fighting with an Afghan government checkpoint.

The air attack came just a day after U.S. President Trump had a telephone call with the Taliban leaders in Doha. The Taliban will likely see this as a breach of the recent ceasefire agreement between the U.S. and the Taliban.

“This is a treaty violation, because both the US and the Taliban entered into legally binding commitments not to attack. The Taliban did not attack the Americans or other foreign forces. If the US did that, they violated the agreement blatantly,” the diplomat pointed out.

The Russians have called the U.S. “nedogovorosposobny” (недоговороспособны) which translate to “not-agreement capable” or unable to make and then abide by an agreement.

On Saturday, February 29, the U.S. Special Representative for Afghanistan Zalmay Khalilzad and a commission of high ranking Taliban signed the Agreement for Bringing Peace to Afghanistan between the Islamic Emirate of Afghanistan which is not recognized by the United States as a state and is known as the Taliban and the United States of America (pdf). (Yes, that is the real title.)

The Taliban were quite happy with the agreement:

Dozens of Taliban members had earlier held a small victory march in Qatar in which they waved the militant group’s white flags, according to a video shared on Taliban websites. “Today is the day of victory, which has come with the help of Allah,” said Abbas Stanikzai, one of the Taliban’s lead negotiators, who joined the march.

Jessica Donati @jessdonati – 18:30 UTC · Mar 3, 2020
We got a copy of the only known photo of Sec Pompeo shaking hands w top #Taliban negotiator Stanekzai — here it is #Doha. US told #Qatar to keep him away from insurgents to avoid photo ops.

At the same time the Doha agreement was signed, U.S. Defense Secretary Esper and NATO General Secretary Stoltenberg were in Kabul and signed a Joint Declaration between the Islamic Republic of Afghanistan and the United States of America for Bringing Peace to Afghanistan (pdf).

The joint declaration includes somewhat vague commitments of further military and economic support for the government in Kabul and its troops. But it noticeably does not include any commitment to use force in support of Afghan government operations against the Taliban. The relevant passage says in Part One Point 2 and 3:

While listing al-Qaeda, ISIS and “international terrorist groups” the U.S. intentionally left out attacks by the Taliban.

Part One Point F of the U.S. agreement with the Taliban says:

The United States and its allies will refrain from the threat or the use of force against the territorial integrity or political independence of Afghanistan or intervening in its domestic affairs.

The fight between the Afghan Taliban and Afghan government forces is certainly a ‘domestic affair’. Under this agreement the U.S. had no right to intervene in it.

Those who defend today’s U.S. attack on the Taliban will argue that the Taliban broke the agreement by attacking a “U.S. ally”. The U.S. agreement with the Taliban says under Part Two Point 1:

The strategic Agreement Between the UNITED STATES OF AMERICA and AFGHANISTAN (pdf) signed at Kabul May 2, 2012 designates Afghanistan as a “Major Non-NATO Ally” of the United States. The argument is thus that Taliban attacks on Afghan government forces are attacks on a U.S. ally from which the Taliban should refrain.

Still my legal reading is that the more recent U.S. agreement with the Taliban as well as the joint statement with the Afghan government supersede that with regards to inner Afghan fighting which is clearly a ‘domestic affair’.

That the U.S. is not an honest partner is also visible in other parts of its recent Afghanistan agreements.

Part One C of the U.S. agreement with the Taliban says:

The United States is committed to start immediately to work with all relevant sides on a plan to expeditiously release combat and political prisoners as a confidence building measure with the coordination and approval of all relevant sides. Up to five thousand (5,000) prisoners of the Islamic Emirate of Afghanistan which is not recognized by the United States as a state and is known as the Taliban and up to one thousand (1,000) prisoners of the other side will be released by March 10, 2020, […]. The United States commits to completing this goal.

The interesting point is that the 5.000 prisoners are actually prisoners of the Afghan government. That the U.S. committed itself to release prisoners it has no direct control over is quite curious.

It is also contradicted by the joint declaration with the Afghan government which was signed at the same time. Part Two Point 4 of it says:

To create the conditions for reaching a political settlement and achieving a permanent, sustainable ceasefire, the Islamic Republic of Afghanistan will participate in a U.S.-facilitated discussion with Taliban representatives on confidence building measures, to include determining the feasibility of releasing significant numbers of prisoners on both sides.

A vague Afghan government commitment to “participate in discussions” about prisoner exchange seems to contradict the strong promise with a fixed date the U.S. made in the agreement with the Taliban.

When the U.S.government signs two agreements with different parties which contradict each other on the very same day it is clearly not-agreement capable.

Why should the Afghan government now agree to a prisoner exchange which would clearly favor the Taliban?

The sitting president of Afghanistan Ashraf Ghani immediately made the point:

Pajhwok Afghan News @pajhwok – 4:27 UTC · Mar 2, 2020
The US-Taliban agreement, which sets into motion the potential of a full withdrawal of US troops from Afghanistan, calls for the release of 5,000 Taliban prisoners.
“We have not made a commitment,” Afghan President says. “It’s a sovereign Afghan decision.” He told @CNN

The Taliban demand the prisoner release before they will sit down with the Afghan government for ceasefire negotiations.

The Taliban will press the U.S. to stand to its agreement and to press Ghani to release their friends. As long as that is not happening they will continue to fight:

A Taliban letter shared Monday with Stars and Stripes by a person with links to the militant group called on fighters to attack Afghan forces, but not U.S. or foreign forces.“After signing the agreement, once again the Mujahedeen (fighters) of the Islamic Emirate are advised to start their attacks against the puppet Kabul administration,” said the Taliban letter, which the person provided on condition of anonymity.
…
Top officials at the Pentagon on Monday indicated they were not surprised the Taliban would return to attacking Afghan forces, but they called on the group to gradually reduce violence across Afghanistan as measures in the new agreement are implemented.
…
“This is going to be a long, winding, bumpy road,” Esper told reporters. “There will be ups and downs. We’ll stop and start. That’s going to be the nature of this over the next days, weeks and months.”

Yesterday Trump had a 35 minutes phone call with the deputy leader of the Taliban peace commission in Doha Mullah Abdul Ghani Baradar. The Taliban emphasized that the U.S. must stick to its agreement. The Taliban readout of the call includes this exchange:

“Take determined actions in regards to the withdrawal of foreign forces from Afghanistan and do not allow anyone to take actions that violate the terms of the agreement thus embroiling you even further in this prolonged war.”
…
The President of the United States Donal Trump said:

“It is a pleasure to talk to you. You are a tough people and have a great country and I understand that you are fighting for your homeland. We have been there for 19 years and that is a very long time and withdrawal of foreign forces from Afghanistan now is in the interest of everyone.”

“My Secretary of State shall soon talk with Ashraf Ghani in order to remove all hurdles facing the intra-Afghan negotiations.”

He said that we shall take complete part in the future rehabilitation of Afghanistan.

Extensive discussions were also held about the implementation of the agreement concluded by both sides.

The White House has not published a readout of the call but U.S. media mention it:

Afterward, he told reporters that his “relationship” with Baradar is “very good … we had a good, long conversation today, and, you know, they want to cease the violence. They’d like to cease violence also.”That’s not true. On Monday, the group’s spokesperson said attacks would resume on Afghan government forces but not U.S. forces, and Monday into Tuesday, there were 33 attacks in 16 provinces, killing six people and wounding 14, an Afghan Interior Ministry spokesperson told ABC News. Five Afghan policemen also were reportedly killed during an attack on a security checkpoint, according to Reuters.

After the call the U.S. military announced that it would continue  to attack the Taliban:

TOLOnews @TOLOnews – 8:38 AM · Mar 4, 2020
Video [English]: US Gen. Miller in exclusive intw with TOLOnews on Tues. says US will defend Afghan forces, situation is “fragile,” reduction of violence is the objective, if Taliban don’t live up to obligations US will respond. #Afghanistan

The Taliban do not have any obligations to stop fighting the Afghan government. The U.S. agreement with them does not include any such clause.

The general announced that the U.S. would continue its air support for Afghan government forces and demanded that the Taliban “lower their violence.”

That is not what the Taliban expected from the deal that was signed. From their point of view a ceasefire with the Afghan government is still far away and they have no obligations to put their weapons down. They will now likely escalate with attacks against the foreign troops in their country.

There were rumors that the U.S. agreement with the Taliban has four secret annexes which would allow for U.S. troops to stay in the country. Rumors in Afghanistan also say that the U.S. intends to let the Taliban take power and to then use them for its purpose against Iran, Pakistan and in Central Asia.

Secretary of State Pompeo denied such side deals:

The US Secretary of State Mike Pompeo on Sunday in an interview on CBS News’ Face the Nation said that along with the public document of the US-Taliban deal released on Saturday, “there are two implementing elements that will be provided. They are secret.”“They are military implementation documents that are important to protect our soldiers, sailors, airmen and marines,” Pompeo said.

“They’re classified, secret. There aren’t any side deals.

This is a rare case in which I believe Pompeo. The Taliban would not stick to any side deal after the U.S. proved to be not-agreement capable with regards to the main deal. If there were any side deals of any importance the U.S. would not disregard the just signed agreement as blatantly as it does now.

Spring is coming and with it the campaign season of the Taliban. With the agreement with the Taliban breached the U.S. is likely to lose more soldiers. To be not-agreement capable tends to have a high price.