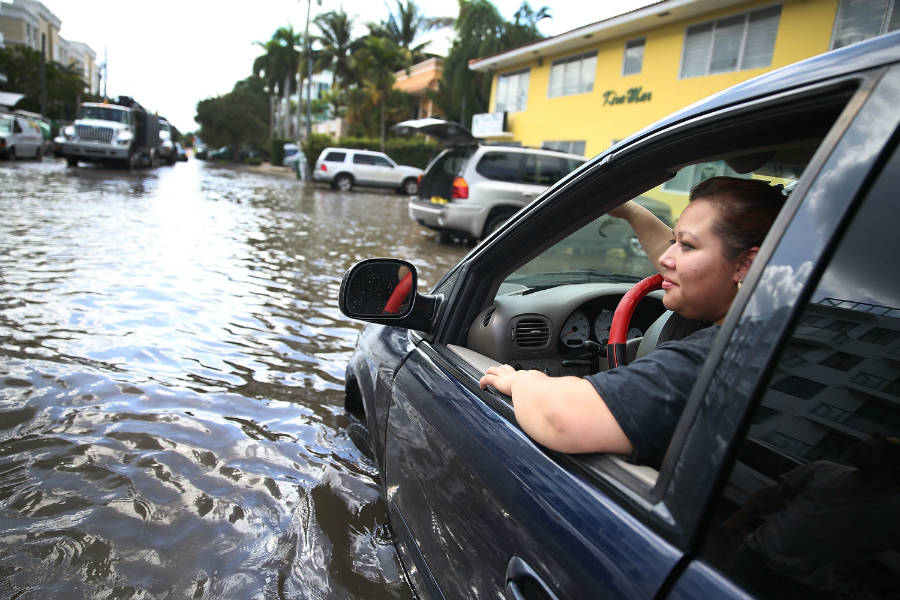 The frequency of high-tide flooding has doubled in 30 years. Some cities faced more than 20 days of it in the past year, and not just during hurricanes.

The nation’s coasts broke records for tidal flooding over the past year as storms combined with rising seas to inundate downtown areas of Miami, Boston and other major cities, according to a federal report released Wednesday.

While some of the flooding coincided with hurricanes and nor’easters, much of it was driven mainly by sea level rise fueled by climate change, scientists with the National Oceanographic and Atmospheric Administration (NOAA) write.

The oceans are rising about 3 millimeters a year on average, driven primarily by melting land ice and warming water, which expands. That rate is accelerating, and it has led to a steady increase in U.S. coastal flooding in recent decades, the report shows. Several cities—including Boston, Atlantic City, and Sabine Pass, Texas—saw more than 20 days of high-tide flooding between May 2017 and April 2018, the “meteorological year” covered by the report.

“Though year‐to‐year and regional variability exist, the underlying trend is quite clear,” the report says. “Due to sea level rise, the national average frequency of high tide flooding is double what it was 30 years ago.”

The report measured data from tidal gauges at 98 locations along the nation’s coasts to see how often water levels rose above a point that typically inundates roads, infiltrates stormwater systems or otherwise disrupts daily life.

While many cities are beginning to address the threat posed by rising seas, the findings highlight the fact that they aren’t keeping pace with the problem.

Boston is two years into a city-wide initiative to protect itself from the effects of climate change, including rising seas. It has begun efforts to shield some vulnerable areas by building new flood walls and elevating streets. Another proposal envisions a harbor-wide barrier system that would close during major storms and cost billions of dollars. But last week, a city-backed study recommended against building a barrier, saying the money would be better spent on smaller-scale measures, such as flood walls or green infrastructure.

A series of winter storms this year underscored the urgency of the problem: Boston matched its previous 12-month record, set in 2009, with 22 days of tidal flooding from May through April. One of those storms, in January, led to the highest tide ever recorded in the city and pushed seawater through downtown streets.

New York, which also tied its record of 15 days of tidal flooding, has launched various initiatives, including localized efforts to build “resilient neighborhoods”, protecting subways by elevating ventilation grates and writing new guidelines for developers on how they can build more resilient structures. But a signature coastal project that would erect berms and walls to protect lower Manhattan—known as “The Big U”—has faced delays and been scaled back due to its high costs.

Norfolk, Virginia—with 14 days of tidal flooding over the 12-month period—has tried to weave adaptation to rising seas into all of its planning and operations, rewriting the zoning code to require that new buildings are built higher up and are more resilient to flooding, for example, and publishing an innovative planning document that considers risks out to the end of the century. It’s also begun a range of infrastructure projects like building coastal wetlands to absorb flood waters and raising some streets, and is looking at a potential $1.8 billion protection plan proposed by the Army Corps of Engineers.

Miami and Miami Beach are planning to spend hundreds of millions of dollars each in coming years.

Which Regions See Most Frequent Flooding?

Tidal flooding is worsening in most places, and it’s currently most frequent in the Northeast, primarily because of the storms that regularly lash the coast each winter. But it’s getting worse fastest in the Southeast. The coast in that region is flat, so rising seas are exposing a relatively large area to new flooding.

“With a little bit of sea level rise you can really get a big jump in the number of days” of flooding, said William Sweet, an oceanographer with NOAA and the lead author of the report.

Earlier this year, NOAA published a report with detailed predictions for how tidal flooding could increase as seas rise. While Miami currently experiences only a few days of tidal flooding per year, for example, it could see inundation every other day by 2060 under an intermediate scenario for rising seas. The report said that some cities that are dry today could have daily flooding by the end of the century.

From Once a Decade to a Common Threat

Gregory Dusek, chief scientist at NOAA’s Center for Operational Oceanographic Products and Services and a co-author of the report, noted that rising seas have pushed the baseline high enough so that the type of common storm that hits a place like Charleston, South Carolina, several times a year can now induce flooding that once came only with hurricanes.

“The flooding that used to occur only during major storms, and maybe once in a decade,” he said, “now occurs with regularity.”