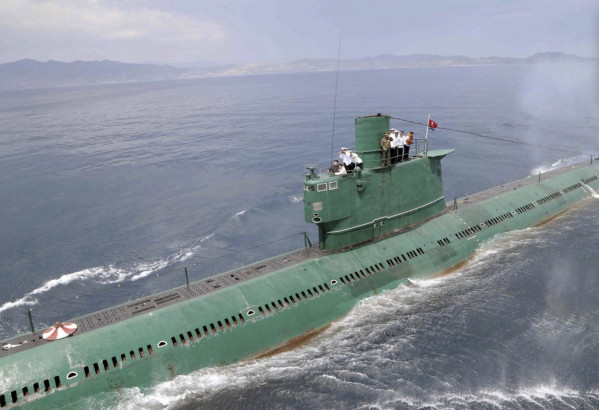 The publication called Business Insider is carrying a story promoting a US first-strike attack on North Korea. The article includes a quote from the Wall Street Journal that reads, “An internal White House review of strategy on North Korea includes the possibility of military force or regime change to blunt the country’s nuclear-weapons threat, people familiar with the process said, a prospect that has some U.S. allies in the region on edge.”

Military action against North Korea wouldn’t be pretty. Some number of civilians in South Korea, possibly Japan, and US forces stationed in the Pacific would be likely to die in the undertaking no matter how smoothly things went.

Talk about an understatement. A US first-strike attack on North Korea would likely escalate quickly into a full bore war that would consume the entire Korean peninsula. China and even Russia (both have borders with North Korea) could easily be dragged into such a war.

In fact the war, behind the scenes, has really already begun. The New York Times reports in an article entitled Trump Inherits a Secret Cyberwar Against North Korean Missiles the following:

Three years ago, President Barack Obama ordered Pentagon officials to step up their cyber and electronic strikes against North Korea’s missile program in hopes of sabotaging test launches in their opening seconds.

Soon a large number of the North’s military rockets began to explode, veer off course, disintegrate in midair and plunge into the sea. Advocates of such efforts say they believe that targeted attacks have given American antimissile defenses a new edge and delayed by several years the day when North Korea will be able to threaten American cities with nuclear weapons launched atop intercontinental ballistic missiles.

At this very moment US and South Korean military units are holding their annual war games that practice a decapitating strike on North Korea. How does the North Korean government know if this time the ‘war game’ is for real or not?

DPRK [North Korea] tests also in response to massive military base structure established by the US in South Korea and remilitarized Japan, all aimed at North Korea.

Add to all this the current Pentagon deployment of the very controversial THAAD (Terminal High Altitude Area Defense) ‘missile defense’ system on board a C-17 cargo plane.

However, the arrival comes at a highly sensitive time as political turmoil is now escalating ahead of the Constitutional Court’s ruling on President Park Geun-hye’s impeachment and China’s intensifying retaliatory measures against the THAAD system.

Although the government says no political intention was involved regarding the timing of the deployment, some critics say the two countries hastened the move to take advantage of the political and social confusion.

However, the deployment process began even though the necessary administrative steps have yet to be completed, including securing the land for the battery site under the Status of Forces Agreement (SOFA), evaluation of its environmental impact, and basic planning and construction of the base.

Considering these steps, it had been expected that the deployment would be made around June or July. But with the unexpected sudden acquisition of the installation, the battery may be put into operation by April, according to sources.

It is widely believed that the government rushed the process to make the deployment irreversible even if President Park is ousted and a candidate against the battery is elected.

The US by its actions is once again destabilizing the region and justifying increased Pentagon military deployments in and around the Chinese and Russian borders.

The Pentagon does not fear North Korea which has an out-of-date military. I recall years ago reading one of the aerospace industry publications reporting on a North Korean missile launch at that time. The US military officials were laughing at North Korea saying they didn’t even have the military satellites and ground stations to effectively track their own missile while the US followed it during its full course. The US though uses North Korea in order to sell the American people and rest of the world on the notion that Washington must do more to ‘protect’ everyone from the North Korean crazy leadership by building up its forces in the Asia-Pacific region.
North Korea’s outdated submarine

Even Business Insider recognizes this reality when they write in their article:

North Korea has a submarine that can launch nuclear ballistic missiles, which would represent a big risk to US forces as it can sail outside of the range of established missile defenses.
Fortunately, the best submarine hunters in the world sail with the US Navy.

Helicopters would drop special listening buoys, destroyers would use their advanced radars, and US subs would listen for anything unusual in the deep. North Korea’s antique submarine would hardly be a match for the combined efforts of the US, South Korea, and Japan.

While the submarine would greatly complicate the operation, it would most likely find itself at the bottom of the ocean before it could do any meaningful damage.
We are living in the most dangerous time in human history. We can’t sit around as bystanders while Washington presses onward with its military pivot to surround Russia and China. We must speak out, help others understand what is actually going on, and actively protest these offensive plans that could lead to WW III.

One last thought. North Korea has not attacked anyone. They are testing missiles – something that the US and its many allies regularly do. While I oppose all of these systems I do believe it is total hypocrisy for the US to decide which countries may test missiles and which may not. Does another nation have the right to say that a preemptive first strike attack on the US is appropriate because this country actually does go around the world constantly creating wars and chaos?