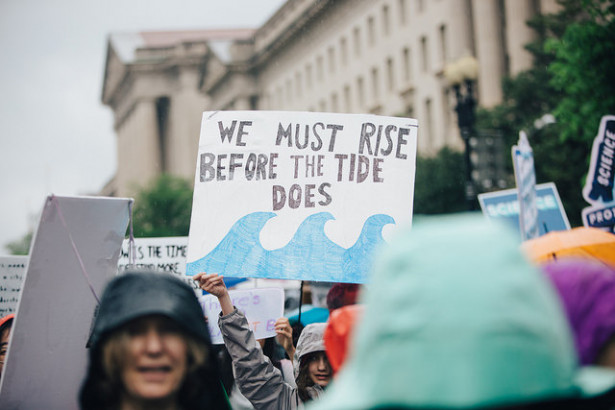 Hallelujah! The third branch of the federal government, the appointed judicial branch, is finally getting serious about climate science. No longer can the elected executive branch and the elected legislative branches cave in to popular pressure to avoid the inconvenient truth that climate change adaptations will be hugely expensive.

My hope is that the lawsuits that will surely follow Hurricanes Maria, Jose, Irma and Harvey will help normalize the idea that “government can be legally accountable for failure to prevent foreseeable harms to its citizens.”

That quote comes from a hot-off-the-press column published in the Sept. 8 issue of Science, “Science in litigation, the third branch of U.S. climate policy.” The quote describes a ruling by a Dutch court that forced the Dutch government to take steps to reduce greenhouse emissions to reduce imminent dangers to its citizens.

Meanwhile, back in the United States, many agency heads in the present administration are either climate deniers or climate demurrers. By executive order, we are pulling out of the Paris climate accord and have tossed out “the mandate of the previous administration to “consider climate change in infrastructure planning.” We’ve also withdrawn “guidance to federal agencies … on how to incorporate climate considerations” into National Environmental Policy Act analysis.

The authors of those quotes are from the Milken Institute School of Public Health, the School of Law and the Trachtenberg School of Public Policy and Public Administration at George Washington University. Their opinions are grounded in professional expertise and fully vetted by this prestigious journal. They had three principal points.

For example, in cases involving biodiversity and extinction, habitat changes caused by climate shifts became legally relevant. In cases dealing with environmental impact analysis, decisions were thrown out that were judged “arbitrary or capricious” for insufficiently considering climate science. For cases associated with energy policy, the role of climate change became part of infrastructure decisions.

A second principal point made by the authorsis that novel legal theories are being introduced into jurisprudence. One example involves the nonprofit Our Children’s Trust, which argues that “U.S. states are responsible for protecting children from the impacts of climate change.” The courts are agreeing that babies being born today have a constitutional right to a livable planet.

The final point is that litigation will increase. The floodgates have opened for a “rapidly building wave” of climate litigation. Under normal circumstances, I would abhor this development, because excessive litigation is a drain on our economy and a prolonged pain in the neck. But perhaps that’s what’s needed to get the executive and legislative branches of government moving seriously on the uber issue of our times.

Fortunately, state governments in California and New England have been progressive on this issue.

Climate change litigation need not be regional. Consider the landslide that took place on California’s Big Sur coast on May 20. Five million cubic yards of debris took out a large chunk of Highway 1, a vital transportation corridor that won’t be fully fixed for a year. Is it a coincidence that this largest slide in state history shortly preceded the nation’s wettest and the North Atlantic’s windiest hurricane? Or could climate change be involved through the logical mechanisms of heavy rain from above and excessive coastal erosion from below?

Monday was the hottest Sept. 25 ever recorded in Connecticut. A trend toward increasing heat is clear. We must adapt. The courts can help us.