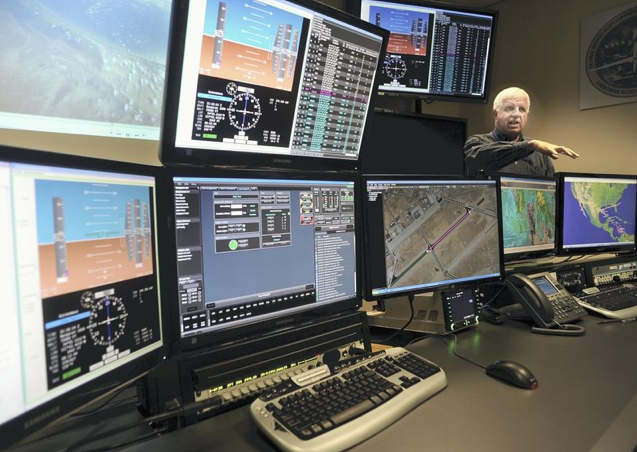 A pilot’s seat for a Global Hawk unmanned aerial vehicle used by the U.S. National Aeronautics and Space Administration

Full-scale large military drone operations will start shortly in Japan and its nearby airspace to monitor Chinese military activities and North Korea’s nuclear and missile development.

The U.S. Air Force plans to deploy two Global Hawk unmanned aerial vehicles to its Misawa Air Base in Aomori Prefecture late this month and the Air Self-Defense Force plans to procure three UAVs of the same type in fiscal 2015 and later.

However, experts warn that regulations on their flights must be put in place because Japan’s current aviation laws lack clear stipulations on large drones.

A Global Hawk is a 40-meter-wide, 14.5-meter-long unmanned plane manufactured by Northrop Grumman, a U.S. aerospace and defense company. The drone has been deployed by the U.S. military in Iraq and Afghanistan.

One of the units to be deployed to Misawa Air Base will be operated from the ground in Misawa until it reaches a certain height after takeoff. The drone will then be controlled via satellite by Beale Air Force Base staff in California, according to sources.

The unarmed UAV will fly at an altitude of 60,000 feet or 18,000 meters for up to 30 hours, and will survey military facilities on the ground and vessels in open waters with sophisticated sensors and radar.

Ground control will resume at the Misawa base just before the drone lands after completing its reconnaissance flight, sources said.

The U.S. Air Force has laid out their plans regarding drone operations in Japan. Two of the three Global Hawks currently stationed at Andersen Air Force Base in Guam are to be deployed to the Misawa base. The air force reportedly decided to move them to the Misawa base so they could be operated on a regular basis since local weather is stable between May and October. These conditions are much more favorable compared to their deployments in Guam, where missions are disrupted by bad weather including frequent typhoons, according to the sources.

The ASDF is planning to acquire three Global Hawks and deploy them at its own Misawa Air Base located next to the U.S. base. Deployment of the drones is expected to enhance the capabilities of both countries to gather intelligence in areas around Japan.

“The Global Hawk provided us with a wealth of data, including surveillance of crippled reactors at Tokyo Electric Power Co.’s Fukushima No. 1 nuclear power plant,” a senior Self-Defense Force official said. “The device will be effective in surveying the activities of North Korea and the Chinese military.”

Japan currently uses an intelligence-gathering satellite to monitor military facilities in North Korea where nuclear weapons and ballistic missiles are developed, but the time frame to monitor a particular site is limited because the satellite is in orbit. However, a Global Hawk equipped with high-performance sensors capable of extended flight time will be able to augment intelligence gathering.

The units are also expected to be useful in watching Chinese naval ship movements in the South China Sea, the sources added.

The transport ministry last month issued warnings to civilian aircraft to avoid collisions with unmanned U.S. Air Force surveillance planes in preparation for their deployment in Japan in late May.

However, the impact of their deployment is said to be very limited because the U.S. Air Force will fly Global Hawks only about twice a week, sources said. Furthermore, civilian airplane operators have taken the news of the deployment of unmanned military planes calmly. “I don’t think it will affect our business,” said a spokesperson of a company that uses a small airplane based at Aomori Airport in Aomori to conduct aerial surveys.

However, some residents around Misawa Air Base have expressed concern about the drones. In April, about 60 residents marched in front of the base to express their opposition to the deployment of Global Hawks.

“I’m worried because the planes are unmanned,” a leader of the protesting residents said.

“As far as we know, there have been no serious accidents with this type of drone, but we also understand the view of residents voicing concern,” an official of the Misawa municipal government said. “We want the U.S. side and the Defense Ministry to disclose more information on the drones.”

The city government wants to ask them to allow local residents to see the actual drones in the future, he added.

With the number of unmanned aerial vehicles set to rise in the future, new regulations on their military and civilian operations are urgently needed.

In Japan and other countries, a large number of unmanned drones are already in use for nonmilitary purposes, including the monitoring of mountain fires and environmental conservation.

According to the Japan UAV Association, which comprises drone manufacturers, the use of drones in this country began in the 1990s. Nearly 2,000 units are now used for such purposes as spraying agricultural chemicals. In recent years, their roles have expanded to include, for example, monitoring volcanic activities from the sky.

However, the Civil Aviation Law, which sets rules on aircraft operations, defines aircraft as “any aeroplane, rotorcraft, glider and airship which can be used for air navigation with a person on board.” The law does not stipulate any clear rules on UAV operations.

The association has therefore set voluntary guidelines. For example, in cases of fixed-wing aircraft, they should, in principle, be flown only over unpopulated areas and their flying altitude should not exceed 150 meters.

In the case of U.S. military aircraft, most stipulations of the law do not apply because of the Japan-U.S. Security Treaty. Thus the Global Hawk drones to be deployed at U.S. Misawa Air Base can be operated under current laws.

But should the Self-Defense Forces seek to operate drones similar to the Global Hawk, new regulations need to be established regarding their position under the law, qualifications of the drone pilots and safety measures to avoid danger in the air.

A transport ministry official said: “Civil aviation companies may also fly large drones in the future. We are closely watching discussions with the ICAO.”